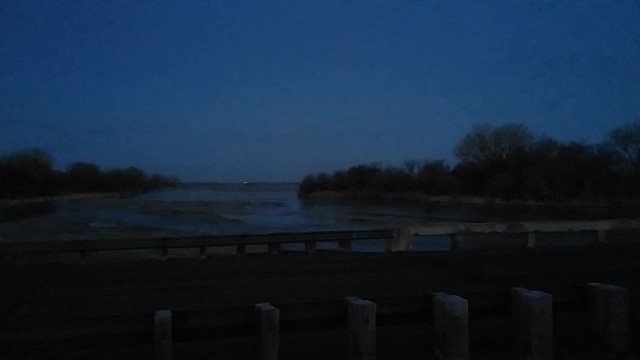 It was cold when we left the hotel this morning, just 17 degrees, but as soon as we arrived at Gibbon Bridge, the excitement of the cranes kept us from even noticing. A good-sized roost had formed quite close to the bridge; we appreciated its nearly topographical extent, stretching from bank to bank, as the sun rose to cast the birds in gold.

These birds were still in the water even an hour after other roosts had noisily broken up. We could happily have stayed and watched them all morning, but breakfast and the anticipation of new sites and new sights called.

Successful as we had been yesterday in getting to see a whooping crane, we decided to move south today to Harlan County Lake, a reliable locality for early-arriving American white pelicans (and if I remember right, now a regular wintering ground for small numbers of the massive creatures). Sure enough, a soaring flock of 35 was visible from a couple of miles north of the lake, and we had good if slightly distant views of another dozen or so on the water. 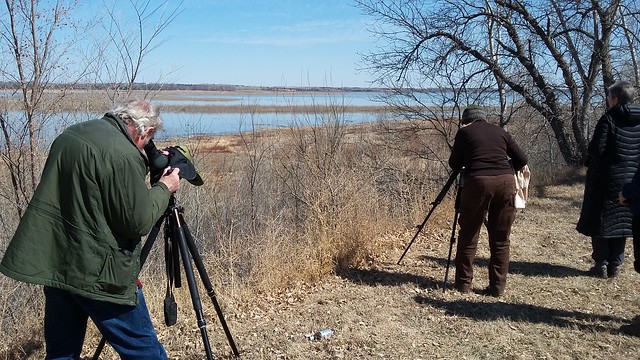 The real treat here, though, was the number and variety of ducks feeding and loafing on the lake. We had outstandingly good views of redheads and canvasbacks together, and there was a massive drift of northern pintail and green-winged teal along the north bank. I’d been hoping for a rare gull or two, but we had to content ourselves with a single Franklin gull, which flew dove-like over our heads a dozen times as if eager to show us every last detail of plumage and structure. 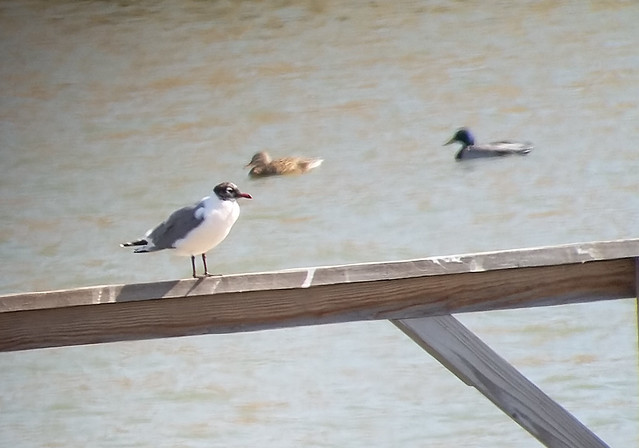 Passerines were significantly less diverse, or at least less conspicuous. We did run into three Gambel sparrows, the first the group had seen this week and a “kind” of white-crowned sparrow rare to nonexistent on most of our local patches.

A quick recalculation of our schedule revealed that we just might have time to check a couple of the Rainwater Basins, so we hastened over to Funk Lagoon. We saw a few ducks on the little water that was there, and were grateful for a tip about a great horned owl nest in a shelterbelt just up the road. Prairie Dog Lagoon was similarly unbirdful, but the eponymous squirrels were out and about, as they had been at the Harlan County dam; no long-legged owls in sight, but it is barely mid-March.

Dinner in Kearney was relaxed and good, though I took as a sign of anxious restaurateurial over-trying that many of us needed to ask the waiter to bring our food without one or another of the advertised ingredients. Does anyone really want a red wine infusion atop a blue cheese hamburger? And do mashed potatoes really need to be slathered in melted butter with truffle flakes? The food was good, but a little more simplicity — perhaps a little more modesty — would have made it even better. 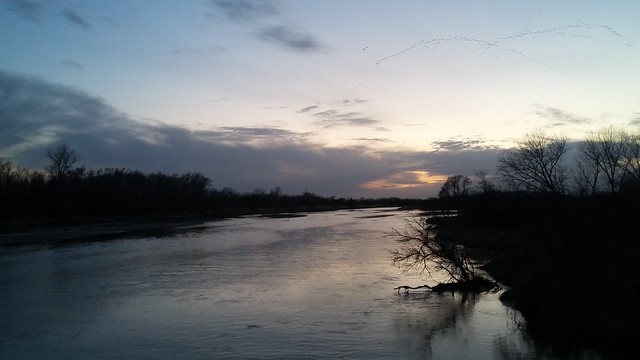 Not all of us went back out after dinner, but I wouldn’t have missed this evening’s flight for anything. Mass after mass of cranes, with long snaking lines of snow and Ross geese, flew in low over the Fort Kearny bridge on the way to roost, only to be startled into raucous flight by one of the dozen or more bald eagles working that stretch of the river. The walk out beneath the first stars of a cool, calm night and the shouts and rattles of cranes and geese may turn out to be the most memorable part of what is already a memorable tour.

But my bet is that the next couple of days will produce sights and sounds and experiences to rival even this, the most spectacular wildlife phenomenon in North America. Stay tuned.