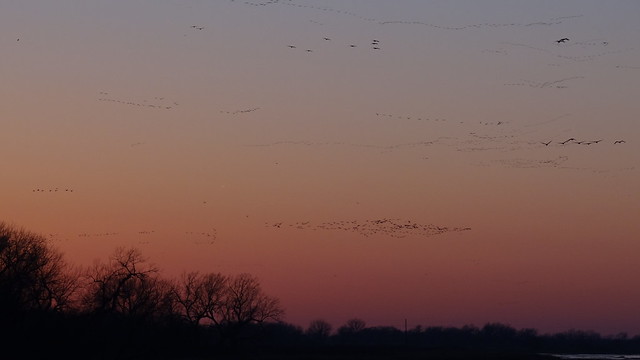 We woke up to wind, light snow, and icy sidewalks, all made more annoying (for me at least) by the disorientation of having reset the clocks. Rather than go out and stand in it, I decided that we should use the first hour of the day to drive west to Wahoo, where I knew we could bird from the van if it was necessary.

I’d underestimated the doughtiness of this group. When we pulled in to Lake Wanahoo and saw birds on the water, no one hesitated to jump right out and into the wind. It paid off nicely, with a mid-sized flock of snow geese (with good looks at scattered Ross geese, too) on the lake and small flocks milling in the air to find just the right angle to land against the gale. The day’s –and the tour’s– first northern pintails and ring-necked ducks were fun, but even those handsome fowl were outdone by the song of a western meadowlark with its promise of spring.

A quick break and we were ready for the next stop, the saline marshes of Ceresco Flats. It was raw out, the temperature just below freezing and the north wind stronger by the minute. I’d hoped to walk the sparrow road with the group (the closed portion of Ashland Road, at the east end of the WMA), but there was just no point in exposing ourselves to the elements in return for quick glimpses of panicked little birds. Instead, we found a great spot where the wind was blocked by a couple of big red cedars, and enjoyed fine views of slate-colored juncos, American tree sparrows, Harris sparrows, and eastern bluebirds. A suspicious-looking distant raptor vanished below the horizon too quickly for us to get a glass on it, but reappeared several minute later to confirm out tentative identification: a dark-morph rough-legged hawk, much less common out here than the equally dashing light birds.

We weren’t quite ready for lunch, and so, after a quick visit to the great-tailed grackle flock at Havelock,  pushed on to Grand Island, where I was glad to have a break from trying to keep the van on the road. Lunchtime entertainment was offered by nearly 300 great-tailed grackles, double the size of the flock I’d been so careful to have us check off on our way west. And a dessert of anticipation was provided by a couple who kindly stopped on their way out to tell us they’d seen a whooping crane just south of the interstate.

I tend, unjustly, to be skeptical when non-birders tell me they’ve seen something fancy, and I seemed to be right when the first two big flocks of sandhill cranes we checked each included an oddly marked white sandhill — the first white-bodied with a gray neck and head, the second nearly all white with gray flecking and splotching on the back. Surely our truck stop friends had seen one of these birds in passing and leapt to an understandable conclusion.

But then Danny found a third white bird, and this one was truly white. And big. And a whooping crane. 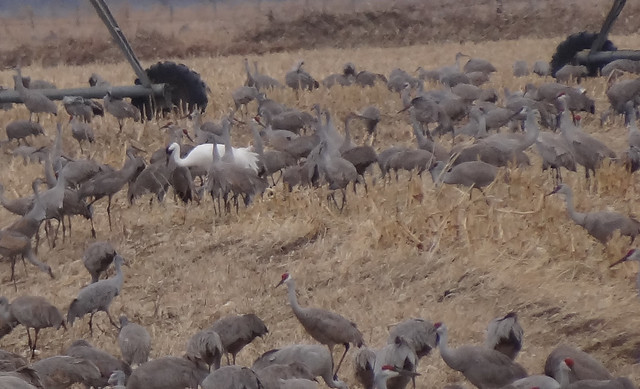 This was a life bird for a couple of us, and we stayed with it for the better part of an hour as it moved through the flock, feeding almost constantly. The only thing to distract us was a small flock of Lapland longspurs that landed momentarily on the edge of the sheetwater next to the road. We’d seen hundreds, probably thousands, in big disorganized flocks as we drove around, but this time one stayed behind to let us admire it on the ground. 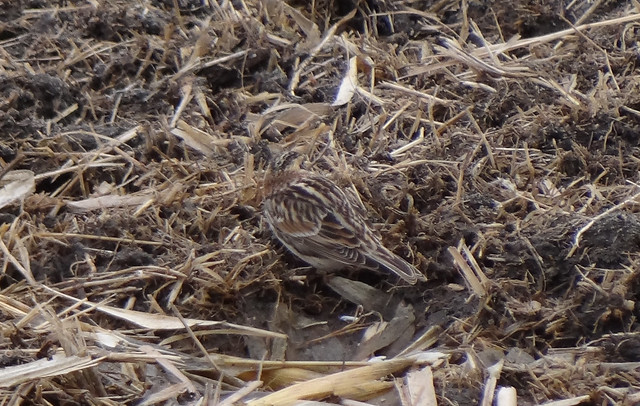 We were simultaneously watching one of the rarest birds in the world and one of the most abundant in the northern hemisphere.

We zipped back to Kearney for an early supper (we’ll eat better tomorrow), then took to the road again to watch the evening flight. I am not sure that I had ever seen snow goose flocks as massive as those at Gibbon; miles of sky were traced with endless drypoint lines and curls of birds. It is impossible to guess how many birds we say: if you told me a hundred thousand, if you told me a million, I would have no response but to nod, numbed by the sheer abundance.

The cranes themselves kept us waiting, no doubt unnerved by the bald eagles sitting on the sandbars next to the usual roosting waters. Not quite half an hour after sunset, though, the show began in earnest, with tens of thousands of sandhill cranes coming in to mill about over the water, finally settling down into flocks that more and more resembled small continents.

It was awesome, if I may take one small step towards restoring that word’s meaning. And we have another whole day tomorrow with the cranes and the waterfowl and whatever else this spectacular season brings us.