It enlivens our summertime marshes with its dark beauty and its comical calls, but the green heron — the 2015 ABA Bird of the Year — has also been put to more practical use.

According to John Brickell, writing in his 1737 Natural History of North Carolina,

The Skin and Feathers calcin’d, stop Bleeding. The Grease eases pain of the Gout, helps Deafness, clears the sight, and is excellent bait to catch Fish with.

Economic ornithology at its finest.

In 1912, Harry C. Oberholser set out to sweep the Augean stables of green heron taxonomy,

to clear away, as far as the present material will permit, the confusion now existing with regard to the relationship and distribution of the various races… with their intricate relationships and rather peculiar geographical distribution.

Of the eighteen subspecies Oberholser claimed to be able to distinguish, only four have stood the test of time: bahamensis from the eponymous islands; frazari from southern Baja; anthonyi of western North America; and the nominate virescens of eastern North America and middle America south to Panama.

Oberholser’s splittery may belong to the past, but one conclusion reached in his revision still rests its dead hand heavy on the list of American birds.

We owe the standard scientific binomial of the green heron to Linnaeus himself, whose Ardea virescens appeared in the Systema naturae of 1758, the first edition to “count” in zoological taxonomy.

a heron with a somewhat crested rear crown, a green back, a rusty breast….

The Linnaean statement of range at first strikes us as a bit vague: this bird “lives in America.” But it makes sense if we look at the ornithological sources on which Linnaeus based the name. 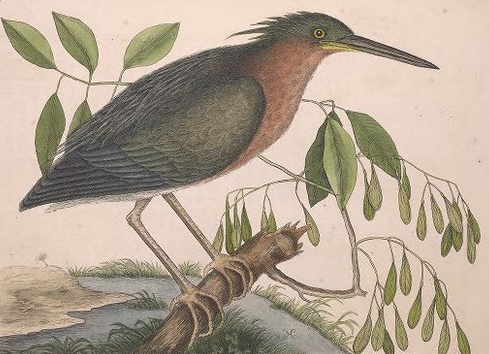 Mark Catesby had recorded the bird in Carolina and Virginia, while Hans Sloane and John Ray had prepared their descriptions — the former English, the latter Latin — from a specimen taken, it would appear, in the West Indies.

“Habitat in America” seems a reasonable way to describe the composite range of so widespread a bird.

In his 1912 revision, he writes that “Linnaeus’s diagnosis fits only the green heron,” as do, obviously, Catesby’s text and plate. But Ray and Sloane, on the other hand, “without much doubt” in fact recorded not the green heron but the least bittern.

This makes Catesby’s description the sole basis of [Linnaeus’s] name, and since most of his [Catesby’s] birds came from the coast of South Carolina, it seems best to restrict the type-locality to that region,

thereby excluding Sloane’s and Ray’s contributions to the Linnaean project.

Oberholser’s restriction is still treated as authoritative in the latest edition of the AOU Check-list:

But was the bird described by Ray and by Sloane really what we know today as a least bittern?

Both those authors describe the bird, apparently a specimen dissected by Sloane on his tour of the West Indies, as “fourteen Inches long from the point of its Bill to the end of the Tail,” with a wing span of about 20 inches — a bit on the small side for a green heron, but largish for a least bittern. Critically, neither remarks on the whitish or tawny panels so conspicuous on the spread wing of the least bittern, but they do note that the wings have “some whitish and tawny Spots here and there,” as in a non-adult green heron. None of the bittern’s distinctive wing and back pattern is apparent in Sloane’s illustration. 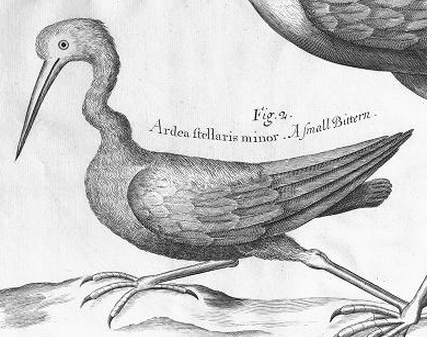 Oberholser’s characteristic confidence notwithstanding, there is no reason not to believe, with Linnaeus, that Ray and Sloane were both describing the bird we know as the green heron. Thus, the limitation of Linnaeus’s sources to Catesby and the consequent restriction of the type locality to coastal South Carolina (which Oberholser had already managed to sneak into the 1910 edition of the Check-list) is, if not wrong, then at the very least unnecessary. I say we should give Sloane and Ray their due, too.

I can’t see it. No matter how many I’ve watched in the field, no matter how many skins I’ve handled, I just can’t see the green on a green heron. And I’m not alone: this name regularly shows up on those lists of “worst bird names of all time,” and I can’t count the times I’ve had to soothe sputtering colleagues in the field who, like me, can see blue and gray and purple and red, but not green.

It’s just a name, of course, and names don’t “mean” in the same way that real words do. There’s nothing to stop us from calling this bird the orange heron or the apricot egret or, for all I care, Hortense. Names can’t be “bad.”

But that doesn’t stop me from wondering why we call it green.

Hans Sloane seems to be the first European to have described this bird, which he encountered in Jamaica in 1687/88. 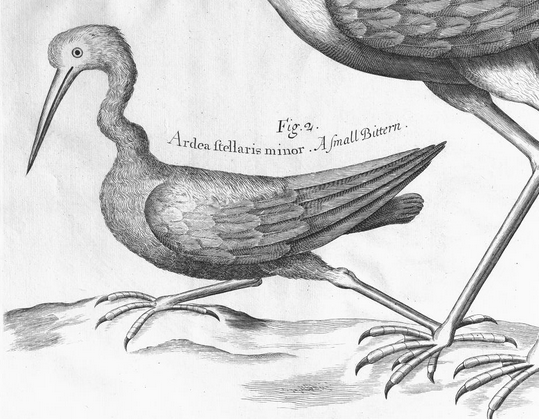 Sloane’s description of his “small bittern” leaves no doubt as to the species under discussion, but he has very little to say about his bird’s colors — and he never mentions any shade of green. He does half-apologize for the engraving:

I know not but that some part of the odd Position of the Neck may be owing to the carrying of it, after it was kill’d. 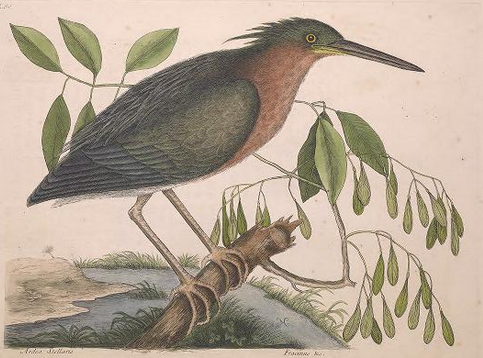 It was Mark Catesby who, in word and in picture, first convinced the scientific world that this bird was green.

A Crest of long green Feathers covers the Crown of the Head. The Neck and Breast of a dark muddy Red. The Back cover’d with long narrow pale-green Feathers. The large Quill-Feathers of the Wings of a very dark Green, with a Tincture of Purple. All the Rest of the Wing-Feathers of a changeable shining Green….

Given that description to rely on, it only made sense for Linnaeus to christen the bird Ardea virescens, “a heron with a somewhat crested crown, a green back, and a reddish breast.”

Catesby, like Sloane, still knew the species under the name “small bittern,” as Mathurin Brisson confirmed in 1760 in the Ornithologie. Rejecting the binomial Linnaeus had published two years earlier, Brisson assigned the bird the Latin label Cancrofagus viridis, which he translated in his French text as “le crabier verd,” the first time, so far as I know, that such a name was used in a European vernacular. 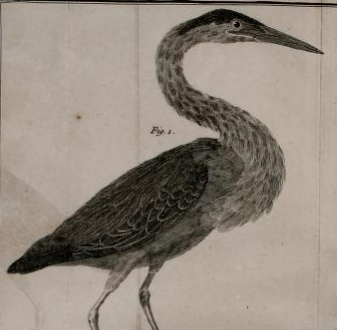 Martinet’s illustration is not what one might call overly successful, combining as it apparently does the body of a green heron with the legs and neck of another species or two. He does much better with the bird Brisson calls “le crabier verd tacheté,” occasionally considered in those long-ago days a distinct taxon or, later on, the female of the green heron. Martinet’s drawing is as delightful as it is readily identifiable, as a juvenile green heron. 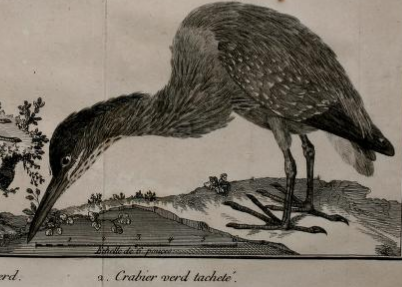 Twenty years later, Buffon retained Brisson’s “crabier vert” in the heading for his account of the species, and he continued, too, to recognize the “spotted green heron” as a distinct species. 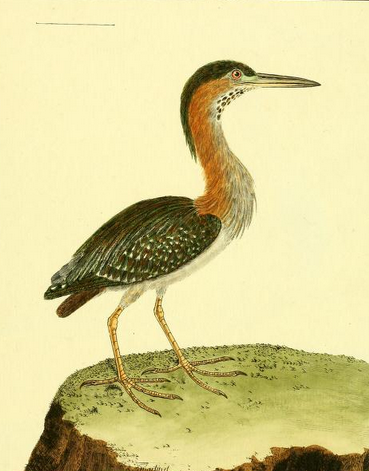 So far as I can tell, the first ornithologist to have rendered Ardea virescens or “crabier vert” in English was Thomas Pennant, in his Arctic Zoology of 1785. Not content just to call the bird “green,” Pennant goes lavishly, extravagantly out of his way to justify the name, describing the little wader as a

H[eron] With a green head, and large green crest … coverts of the wings dusky green, edged with white….

Pennant’s name appears to have been made canonical by its use in John Latham’s General Synopsis and Index ornithologicus. One holdout was William Bartram, who in his 1791 Travels used “green bitern” or “lesser green bitern” for the bird — an obvious nod in the direction of Catesby, whose itinerary largely inspired Bartram’s journey. 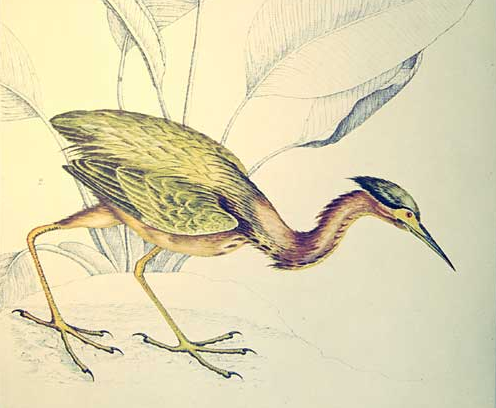 Bartram’s friend and disciple, Alexander Wilson uses the name “green heron” as the title of the species account in his American Ornithology; no doubt as a compliment to his patron, though, the text itself refers to the bird as “the Green Bittern.” Wilson also alludes in disgust to the “very vulgar and indelicate nickname” with which the bird is saddled by “public opinion”; “shitepoke” and similar names are still current today over much of this species’ US range, a rare example of the survival of a genuine folk name. 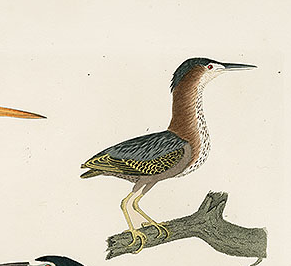 Bartram and Wilson were on the wrong side of onomastic history. It has been green heron ever since, except for that brief period when this species and the striated heron were “lumped” under the English name green-backed heron (intentionally or not, a direct translation of Linnaeus’s Ardea dorso viridi). 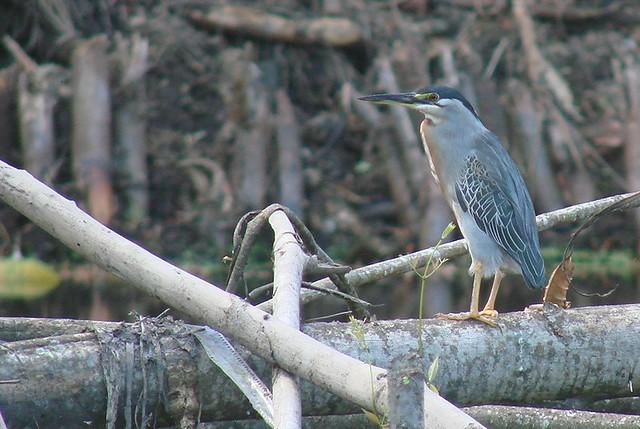