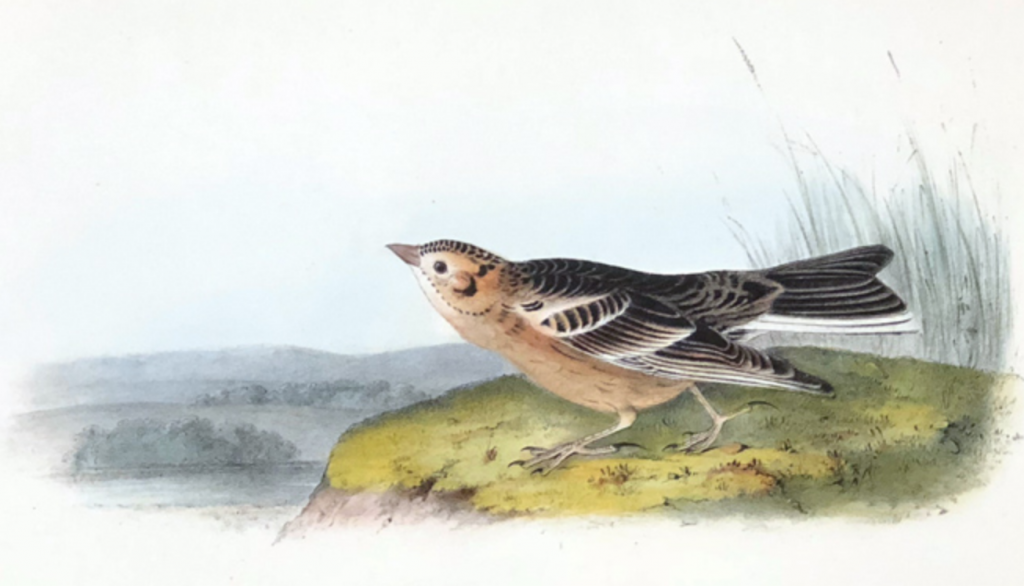 We’ve been a bit far north these past couple of weeks to have a real chance at green-tailed towhees, but we’ve been keeping eyes and ears open just in case one of those lovely sparrows — some say the loveliest — should happen to “overshoot” on its way to the breeding grounds.

As yesterday’s entry here pointed out, the generic affinities of the species were matter for discussion and debate for a long time. Beyond that question, though, there was another, more material: For twenty years after the species’ first description, we just didn’t know exactly what a green-tailed towhee was.

The species was first published by Audubon, as the green-tailed sparrow, in the last volume of the Ornithological Biography. Audubon never saw the bird himself, and never painted it; he bases his description of this “true Fringilla” instead on what seem to be two separate letters from John K. Townsend, who shot a “new and singularly marked Sparrow” on July 12, 1834. Townsend informed Audubon that

the specimen is, however, unfortunately young, and the plumage is not fully developed. I feel in great hopes of finding the adult….

In what appears to have been a subsequent letter, Townsend is forced to report that

In this I was, however, disappointed: I never saw it afterwards.

In fact, it was not until September 1842 that the towhee seems to have been encountered again — encountered, but not recognized. Somewhere in the Rockies, “about half way between New Mexico and the Colorado of the west,” William Gambel collected a single male of a bird that he named Fringilla Blandingiana, in honor of the discoverer of the turtle. Gambel was almost certainly aware of Audubon’s publication of the green-tailed towhee, but his bird, unlike Audubon’s, was an adult, and neither Gambel nor his colleagues at the Philadelphia Academy put the two together.

Six years later, in 1848, Baron de Lafresnaye received an adult bird in a shipment of Mexican and South American specimens sent by a M. Salé to his mother. Obviously unaware of Gambel’s description, and apparently likewise failing to compare it to Audubon’s, Lafresnaye described this “touit à coiffe rousse” as a new species, Pipilo rufo-pileus — thus assigning the species for the first time to the genus Pipilo.

It did not help that the original Townsend/Audubon specimen had somehow slipped into obscurity. John Cassin in 1855 asserted expressis verbis that there had never been such a skin — in spite of Townsend’s clear claim to have taken the specimen.

It would take a few years to figure it all out, but clarity shone forth with the publication in 1859 of the ornithological volume of the Pacific railroad surveys. While Spencer Baird was still using the name blandingiana in 1852, seven years later he, with Cassin and George Lawrence, was able to determine that blandingiana and rufopileus were mere synonyms of the Audubonian chlorurus.

And they were able to do so because the Townsend specimen had turned up — in Baird’s own cabinet, whence it passed into the collections of the Smithsonian as number 1896. Comparison of that skin with a slightly older male specimen and a series of adults led them to conclude that the Townsend skin

is unmistakeably the Pipilo here described, and settles the question in favor of the priority of the name chlorurus.

The odd outlier aside (Ridgway cites blandingiana as late as 1868), that has been the bird’s specific epithet ever since. And if anyone doubts that it should be so, Townsend’s bird from July 1834 still lies peaceful on its back in Washington.