Well, it wasn’t meant to be a quiz photograph, but this bird in Berlin‘s Tiergarten last week was just a little bit too fast for me.

What is it, and how do you know? 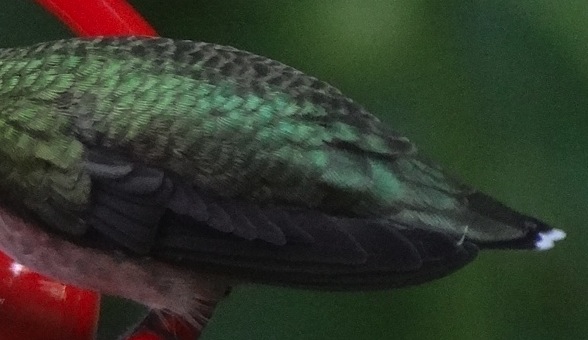 Every single thing I know about hummingbird identification — and a measurable share of what I know about hummingbirds, period — I owe to Steve Howell’s photographic guide. A feeder, a scope or pair of binoculars, and that book open on the table in front of you for a couple of hours, and suddenly things once inscrutable begin to make sense. Frustration cedes to challenge and, yes, even to fun. 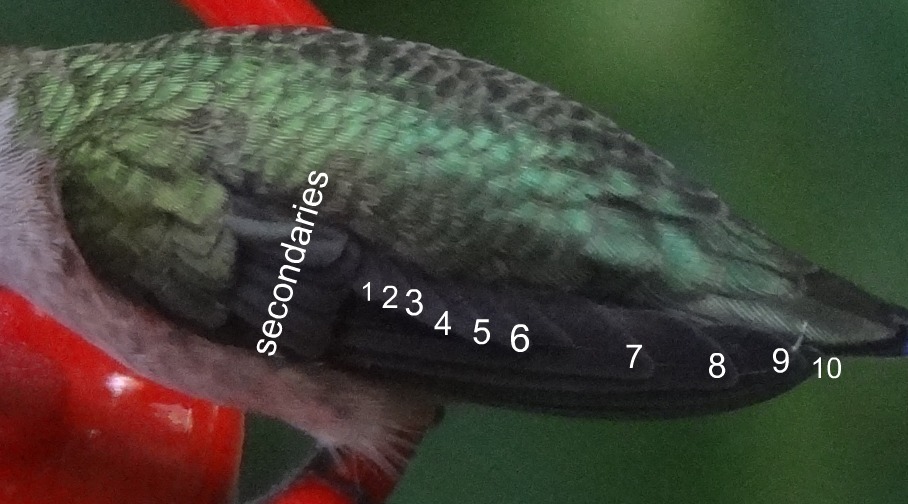 Click on the photo to see the entire wing.

One of the neatest tricks in the book is the identification of birds in the genus Archilochus using the relative widths of the primaries. On most hummingbirds, the primaries are of more or less even breadth (except, obviously, where the outermost is modified to produce sound, as in Selasphorus). In Archilochus, though, the outer four — numbered by convention 10 through 7 — are significantly and visibly wider than the inner six (6 through 1), as even my smudgy photo of a ruby-throated hummingbird reveals. In the field or at the feeder, the result is a row of “mini-feathers” along the top of the folded primaries, ending at the square secondary panel.

I remember it this way: the name “Archilochus” starts off slow and easy, ar-KIL, and then rushes to its end, ukus, just as the primaries begin nice and broad before suddenly, hastily shrinking. (Well, it works for me!)

As to distinguishing between the two species of Archilochus, I’ll admit that I don’t always find it as easy as other people apparently do. Me, I see plenty of female-plumaged individuals whose outermost primary (10) strikes my eye as neither especially broad and blobby-tipped (as in the black-chinned) nor particularly narrow and sharp-ended (as in the ruby-throated). To be honest and lazy, I don’t worry about it that much this time of year in my New Jersey backyard. 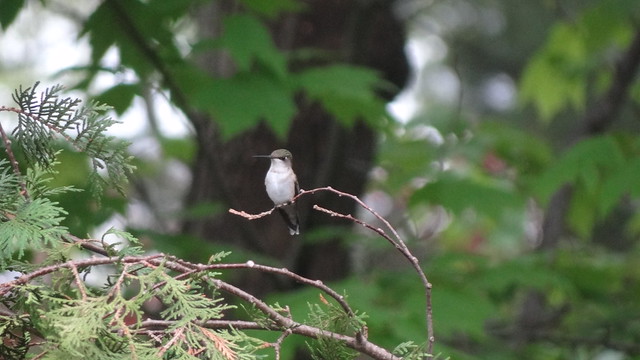 Interestingly, the distinctive wing structure of the ruby-throated was discovered very early on in the history of trochidology. Where Catesby writes only that the wing of the ruby-throated is “of a singular Shape, not unlike the Blade of a Turkish Cymiter,” Buffon was able to tell us in his memorable way that

the shape of their wings is quite notable…. The outermost four or five feathers are very long, the next much less so, and those nearest the body are exceedingly short, all of which, combined with the fact that the large outer primaries are recurved, makes the spread wings look like a stretched bow; the body of the little bird is in the center like the arrow.

Subsequent writers seemed to ignore what the great Frenchman had found “assez remarquable.” Audebert and Vieillot, and later on Lesson, ignore this feature. MacGillivray’s dissections say nothing of it. Bourcier and Mulsant, naming the black-chinned hummingbird in 1846, offer no detail beyond calling the bird’s wing “falciform.” And Reichenbach, when he created the oddly named genus eight years later, provided no diagnosis at all.

To my knowledge, memory of the unique wing structure of Archilochus was not revived in writing until 1874, when one of the authors of the History –whether it was Baird or Brewer or Ridgway — wrote that the

inner six primaries [are] abruptly and considerably smaller than the outer four,

a comment illustrated with a sketch by the youngest author.

Daniel Giraud Elliot, in his Classification and Synopsis five years later, provided an even better drawing — though this text leaves the primary widths unmentioned. The same sketch appeared in the second and subsequent editions of Coues’s Key, with the explanation that the

For the rest of the nineteenth century and into the early twentieth, this character would be stressed again and again as diagnostic for Archilochus, finding its clearest statement in Ridgway:

This was not, however, one of the in-hand characters that passed from the museum into the field in the 1920s and 1930s. No doubt deemed too fine, too subtle, and just too downright small for the optics of the day, the wing structures of hummingbirds went unmentioned in the popular guides — and I have the impression, too, from some quick sniffing around in the more technical manuals, that primary shapes were gradually neglected even there.

One of the great projects of the past 30 years — starting with “the new approach” and continuing with such fine books as Howell’s photograph guide — has been to return to the drawers and the handbooks in search of neglected, forgotten, and misunderstood information that we can use in the field. The wing shape of Archilochus hummingbirds is just one of the best-known examples — why not go out and come up with more? 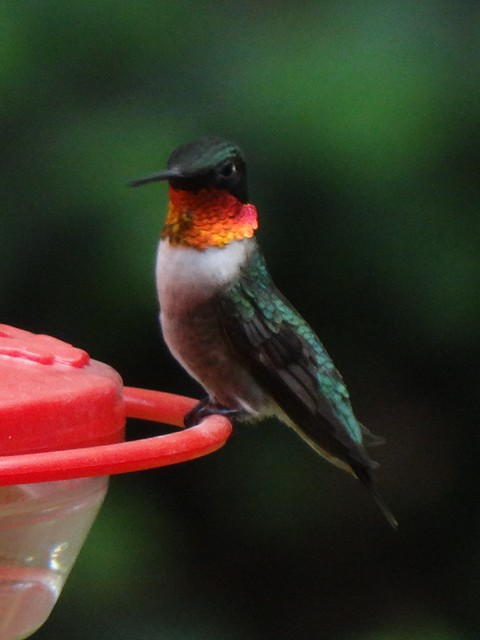 Nearly everyone got this quiz right, though to my surprise almost no one used the right words in talking about the inner primaries, which more than one respondent called “secondaries.”

A few respondents went on to identify the bird to species — and a majority decided (incorrectly) that this was a black-chinned. I repeat: Not as easy as often claimed!

Some of us were talking about hummingbird wing structures the other day — which may be why some of us don’t get invited to many cocktail parties.

In any event, take a look at this. What genus does this bird belong to? 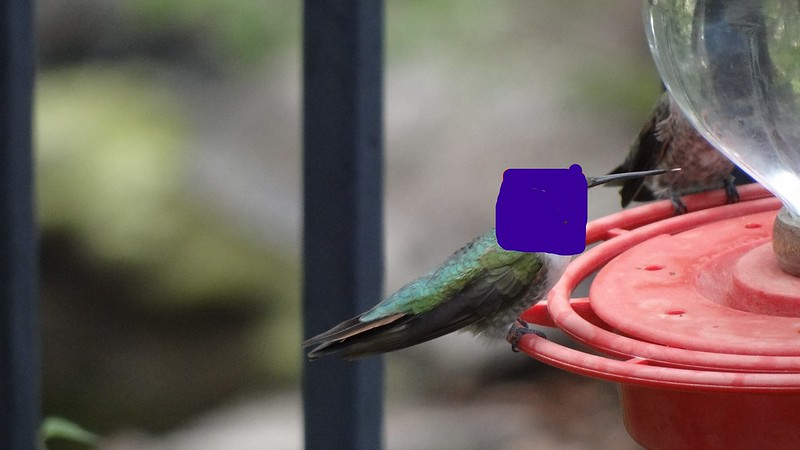 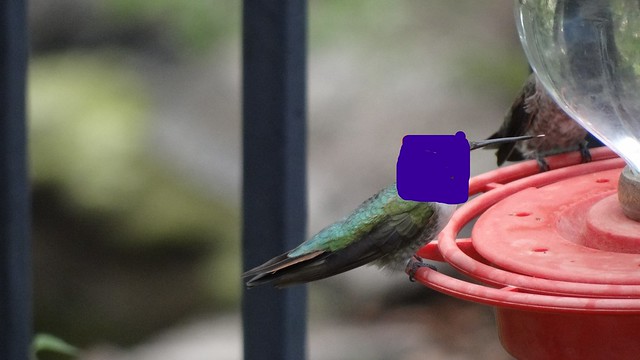