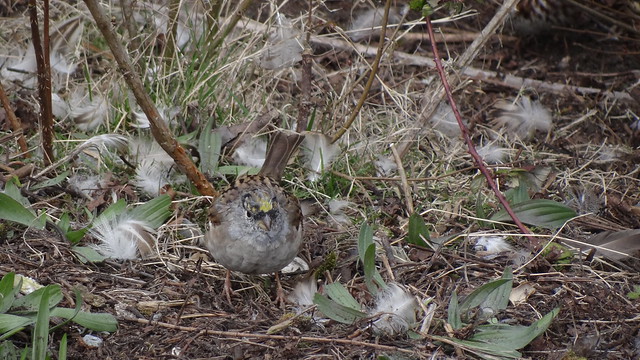 What a blast! I picked Soheil up at his lodgings in Richmond a bit after 7:00 this morning, taking the time to enjoy northwestern crows on the way down; I’d expected rain, but there was just the barest hint of a sprinkle on my early morning drive, and though the chill never lifted, all day long we stayed dry — and even saw some sunshine by the time we enjoyed an early supper this evening under the watchful eyes of Ladner’s bald eagles.

I’d heard that white-winged crossbills were to be found in Steveston, so we zipped down there to start our morning’s birding. We stepped out of the car to the songs of Puget Sound white-crowned sparrows (yea) and Eurasian collared-doves (less yea), but after a few minutes of hearing and seeing nothing loxiac, walked the few feet down to the river. Glaucous-winged and mew gulls loafed on logs in the water, while several bald eagles kept the ducks busy; one of the eagles missed all the fun, assigned instead to incubating or brooding the contents of one of the huge riverside nests. A big, big-nosed pinniped moving through the water was probably a California sea lion. 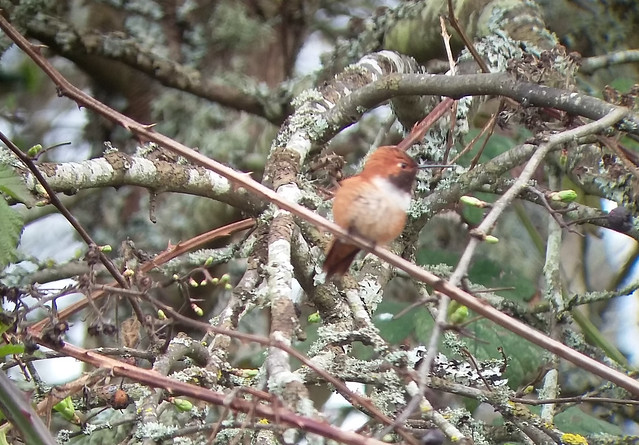 The lawn of the condo complex behind us was hopping, too. A suet feeder proved irresistible to a couple of pairs of bushtits, and the first of the day’s half dozen rufous hummingbirds was here, too — all but one of them were males, a couple of them in vigorous “shuttling” display. 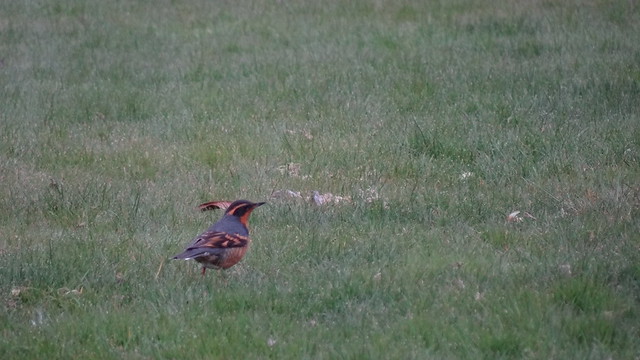 The manicured bluegrass itself provided the feeding ground for a fine varied thrush, which eventually gave up being admired and flew up into the bare tree above our heads, where he sang several times that eeriest of Pacific northwest bird songs.

The sparrow flock was shyer, but we had great looks at Lincoln, song, sooty fox, golden-crowned, and Puget Sound white-crowned sparrows, all popping out onto the grass to feed for a moment or two before taking refuge again in the hedge.

Wonderful to be back in a place where golden-crowned is the most abundant passerellid, the song sparrows are red, and the fox sparrows are plain-headed. 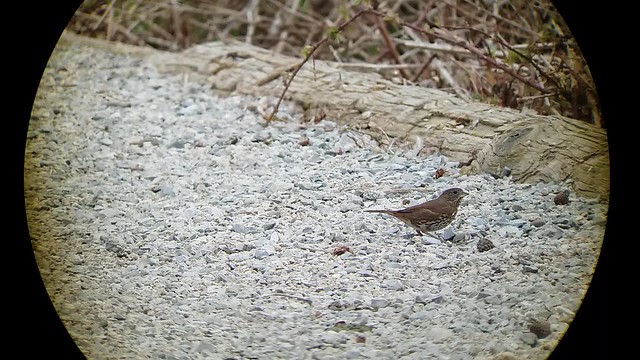 The biggest surprise was a flock of 34 swans that flew overhead, not trumpeting but whistling as they passed. I was too startled to make entirely certain that all of the birds were tundra swans or if perhaps there were just a few vocal birds of that species joining up with the much more expected trumpeters; tundras are rarish birds here, and we were lucky to be in the right place at the right time. We would not see any trumpeter swans until the last stop of our day, when we found sixty or seventy loafing off Westham Island.

I could have spent the rest of the week there, and we will certainly drop back by at some point to have another listen for the crossbills, but there are even birdier, even more scenic sites around Vancouver than condominium parking lots. 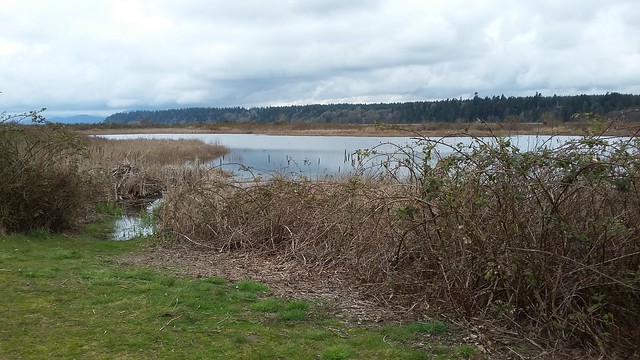 With an eye on the tide tables, we dashed north to Iona, where spotted towhees, another rufous hummingbird, and a few hundred noisy snow geese greeted us. The ponds were full of water and full of ducks: pinwheeling northern shovelers, elegant northern pintail and ring-necked ducks, and busily feeding lesser scaup by the hundreds.

Sparrows of what were now the expected species fed on the roads, and flyovers included my first violet-green swallows of the year and a surprise western meadowlark.

If the meadowlark was a surprise, the American minks were a shock. 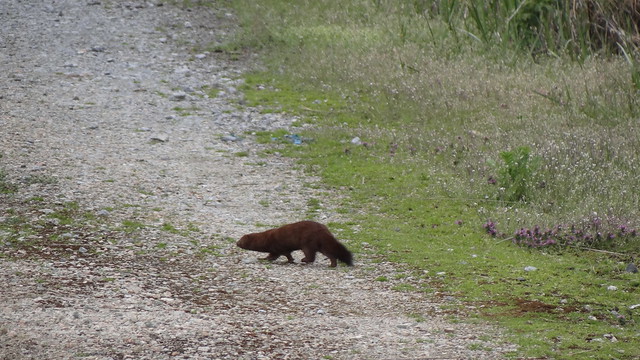 Soheil saw the first one while I was busy with song sparrows; a few minutes later we saw it or another, and a few minutes later three more or less together on the path. As we watched, one of them dropped into the water and re-emerged with a dead, probably long-dead, duck, holding it tight in its teeth as it dragged it backwards across the trail, only to lose its prize when an adult bald eagle dropped out of nowhere to steal the corpse and send the mink, lucky not to have been the eagle’s second course, scampering into the next pond.

We walked out and around the “outer” pond, where marsh wrens and red-winged blackbirds were busy staking out their territories and a nice flock of tree and violet-green swallows skimmed and drank in front of us. 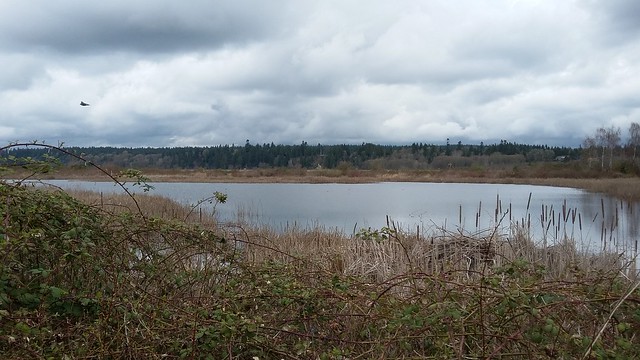 We’d planned to head out the jetty, too, but the rapidly ebbing tide and the cold breeze off the Salish Sea convinced us that there probably weren’t many birds out there anyway. So how about Reifel? 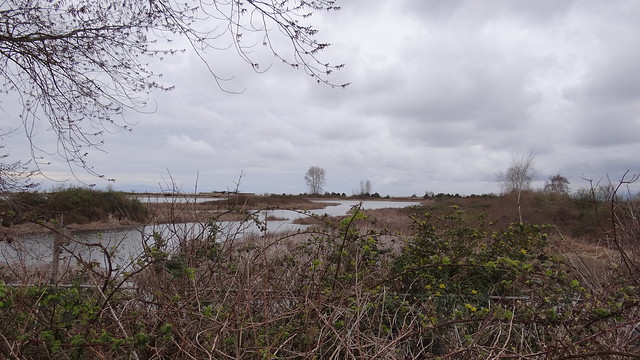 The place was insane, as always, with the pushy half-tame mallards joined by ducks of several other species, sparrows, and blackbirds in the rush for birdseed. 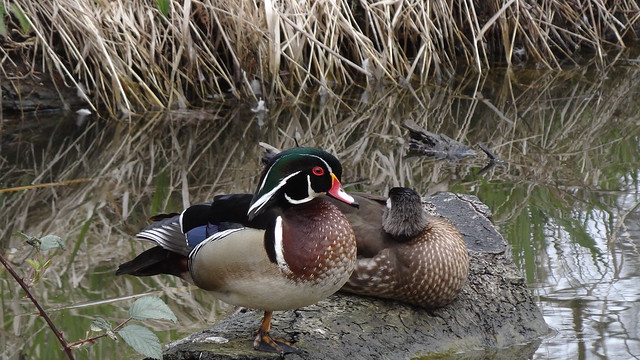 We braved our way through the madding crowd, pausing to admire a rare black-crowned night-heron at its sullen roost, and headed out to the foreshore. Another flock of snow geese did its best to deafen us, watched closely by as many as fifty-five bald eagles perched out on the tidal flat.

The real show at Reifel this afternoon, though, was the northern harriers. We’d seen scattered birds all day here and there, but as afternoon ceded to early evening, the big cattail marshes gave up their store of long-winged hawks; eventually we were watching at least five, including two beautiful silver males. It made us wonder how many owls were waiting on the ground out there for the sun to set.

We wouldn’t find out: Reifel has an early curfew, and I was cold and hungry. We stopped in Ladner for supper, fish and chips while we watched eagles fly up and down the water out our window. In the sunshine. Tomorrow is going to be a great day!