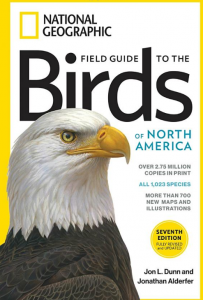 Yes, the seventh. Nearly half the US population is younger than this canonical guide, which first appeared to great and justified acclaim in 1983. Thanks to conscientious updating by one of the finest birders in the world, each succeeding edition has been even better than the one before, with revised texts, repainted figures, and almost always a number of entirely new species accounts and illustrations.

This seventh edition carries on that estimable tradition of constant improvement, treating more than 1000 species from North America north of Mexico. Several accidentals previously relegated to the back of the book have been moved into the main text, and a brief appendix lists additional species from Greenland and Bermuda, preserving Nat Geo’s claim to be the most complete field guide ever produced to the birds of our region. Hawaii’s small but highly distinctive land bird fauna is not included.

Such comprehensiveness comes inevitably at the cost of portability, and the new edition, coming in at nearly 600 glossy pages, may prove uncomfortable for beginners hoping to pocket it in the field. Brick-like as it is, though, Nat Geo is still lighter than the big Sibley guide, and hardly heavier than the smaller regional Sibley volumes. At the same time, the illustrations here average almost twenty percent larger than those in any version of Sibley.

The illustrations remain one of the minor weaknesses of this guide. Many of the thousands of individual figures–Killian Mullarney’s and Jonathan Alderfer’s shorebirds, John Schmitt’s swallows, Thomas R. Schultz’s meadowlarks, and others–truly are among the best ever painted for a field guide, while others nearly approach the other end of the spectrum (everyone has her own anti-favorites here, but surely the sage thrashers and the vesper sparrow are high, or low, on most lists). it is not the variations in quality, however, that jar, but the discrepancy in styles: with almost two dozen artists responsible for the paintings in this edition, it can be a jolt to turn the page, or even to glance from one bird on the plate to another. Peter Burke’s highly (and attractively) stylized Basileuterus warblers, for example, contrast unpleasantly with Schultz’s more conventionally realistic palm warblers. Happily, ever more stylistic consistency has been imposed with each succeeding edition of Nat Geo, but there is still some distance to go before we can leaf through the guide without the occasional visual hiccough bringing us up short.

The new edition includes 330 entirely new figures, and several others, such as the common scoter, have been subtly touched up to correct or emphasize a useful field character. The ground-doves, for instance, are significantly improved, with informative insets showing the diagnostic pattern of the wing coverts; the flying individuals are now seen from below, a much more revealing view. The older images of hummingbird wing and tail structures have been replaced with new and clearer drawings. The white-breasted nuthatches are all new; they are perhaps less decorative than their predecessors in other editions, but this is now the best treatment of what are probably the three distinct species in the complex. Not all of the new plates are quite as successful. The Aztec thrushes are oddly stretched and starling-like, and the adult female is missing her tail and much of her foot. The new magnolia warblers, blurry in my review copy, do not seem to be painted to exactly the same scale as the other figures on the plate.

The layout of the text and illustrations is familiar and user-friendly, with plates facing the text and maps. As in the sixth edition, the plates are heavily annotated with descriptions of field marks and behavioral characters, a helpful feature shared with the Sibley volumes and, of course, the trend-setting European guide published in this country by Princeton University Press. The facing-page texts offer further identification strategies, voice descriptions, and a statement of range and abundance; in the case of rarities and vagrants, the distribution summaries can be remarkably thorough and precise. The font for these section appears to be very subtly different from that used in the immediately preceding edition, and all the text is dark and eminently legible. Paul Lehman’s maps are, as expected, accurate, precise, and up to date. Many have been redrawn for this edition; that showing the seasonal movements of the Hawaiian petrel is surely among the most remarkable in any field guide.

One of the great strengths of this guide from its very first publication has been its emphasis on geographic variation. Field-identifiable subspecies and subspecies groups are clearly labeled and treated in often impressive detail; of special interest to listers, predictions are offered about taxonomic “lumps” and “splits” to come (some of which have in fact been carried through since the manuscript was completed). In addition to plumage characters, Dunn and Alderfer conscientiously point out the vocal differences among populations, reminding birders to listen critically not just to red crossbills but to warbling vireos, evening grosbeaks, and blue-gray gnatcatchers across their ranges.

To their great credit, the authors of this guide have always aligned its taxonomy as closely as possible with the official checklist of the American Ornithologists’ Union, now the American Ornithological Society. The new edition adheres to the nomenclature set forth in the 2016 Supplement to that list, which instituted several quite significant changes, particularly to the sequence of orders and families: the pigeons and hummingbirds moved far forward in the list, the pelicans and herons towards the center, the hawks and owls to adjacent positions. There will inevitably be weeping and gnashing of teeth, but as Dunn and Alderfer correctly point out, updating the sequence in the field guide offers readers a more accurate insight into the relationships and evolutionary histories of the birds we watch; it also honors the historical link between birding and scientific ornithology.

Learning a new sequence–in effect, learning to find the bird in the book without wasting time thumbing through the index–is not all that difficult, and it keeps the mind limber and alert to unsuspected differences and similarities. It has long been my suspicion that just where a bird is in the field guide has an immediate effect on the species’ identifiability: birders of my generation are still more likely to mix up warblers and vireos than are those who came of birding age after the families were split up in the books, and I’m sure that generations to come, used to the wide separation between the hawks and the falcons, will look back with puzzled amusement on the still commonplace misidentification of sharp-shinned hawks as merlins.

It is a sign of how rapidly ornithological taxonomy is changing (and, one assumes, progressing) that the classification and sequence used in this brand-new edition are already out of date. The New World sparrows here still share a family with the Old World buntings, and the yellow-breasted chat and western spindalis occupy the positions they held before the AOS published its 2017 supplement in July. That same supplement altered the position of several passerine families, leaving the wrentit, the bulbuls, the whydahs, the wood-warblers, the spindalides, the yellow-breasted chat, the icterids, and the true tanagers out of taxonomic place in the field guide. Obviously, the authors were aware that such changes might be on the way as they completed their manuscript, and they are at pains to inform the reader of such anticipated innovations as the “lump” of the Iceland gulls and the “split” of the Cassia crossbill.

Nat Geo is as much intended for beginning birders as for the more experienced, and the concise introduction serves as a quick primer to birding and bird identification. Some of the terminology strikes me as old-fashioned: the unnecessary spelling “juvenal” is still used for the plumage worn by juvenile birds, and the markings on the lower portions of the bird’s “face” are still styled the “moustachial,” “submoustachial,” and “malar” stripes rather than the more straightforward and more readily memorable “whisker,” “jaw stripe,” and “lateral throat stripe.” Ages and plumages are designated using the life-year system, though in at least one case–the rock sandpiper–a plumage is referred to as “basic,” a borrowing from the now more familiar modified Humphrey-Parks nomenclature that is not defined or explained anywhere in the book.

Like every one before it, the seventh edition of Nat Geo is a handsome and sturdy book. Thumb tabs mark the larger families to help readers orient themselves in the book block. There are extremely few typographical errors, though it is unfortunate that three of them occur on the very first page of the text; the only misspelling I have encountered in the scientific names is “sinesciurus” instead of the correct original spelling “sinesciuris” for the Cassia crossbill. The prose of the species accounts and in the introduction is almost always clear and accurate; it is not true, though, that the third word in the scientific name of a subspecies is called a “trinomial.”

In their introduction, Dunn and Alderfer urge us, in italics, to remember that the most important thing is to “look at the actual bird” and to save reading the bird book for later. That’s good advice. But this latest edition of an eminent classic is so good that soon enough it won’t be read at all: it will be quoted, referred to, even recited by birders, young and old, who have committed its wisdom to heart and put its information to use every day in the field.