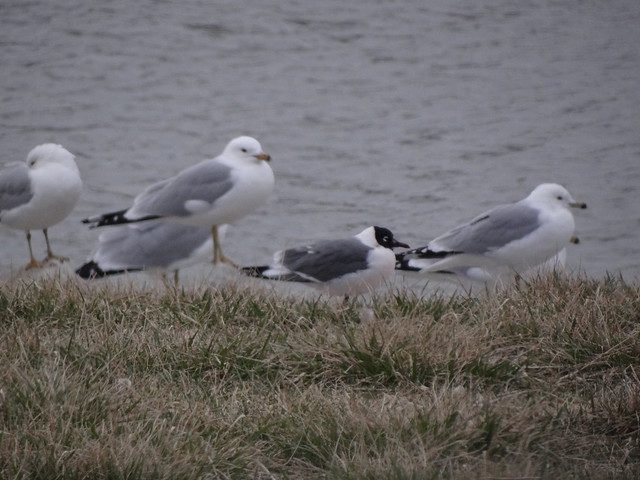 We’re off to a fine start on this 2017 Victor Emanuel tour to Nebraska, with an afternoon of good birding and great company behind us.

The pretty little Franklin gull in the photo was a good find. The big flocks won’t be appearing for another three weeks or so, and I’d suspect that this bird was one of those that for whatever reason linger all season far north of the usual South American wintering grounds.

Lake Manawa produced a smattering of waterfowl, including half a dozen hooded mergansers and a nice gang of 35 or so canvasback among the couple of hundred lesser scaup. That we weren’t the only ones watching ducks this afternoon was made clear by the roost flight of bald eagles: at least 30 came out of the trees around the lake to seek safer perches on the Nebraska side of the river.

This tour is often very nice for mammals, and I hope we didn’t use up all our luck today. We started off with excellent looks at a black-morph eastern fox squirrel, one of the handsomest of the squirrels. Then at Lake Manawa we were serenaded in the late afternoon by a pack of coyotes, beautiful noise that never fails to send a shiver up the spine.

If there was a disappointment today, and I don’t think there really was, it was the woodcock show. The first started to buzz at 6:40 pm, but we had only fleeting views of three birds flying in early to display, and not a single good look at any of the birds up in the sky. It was getting chilly and the wind came up, so we kicked it in half an hour later. We’ll try again at the end of the tour — tomorrow it’s west to look for cranes, gray ones and white ones and maybe, fingers fervently crossed, one with a black and white neck….