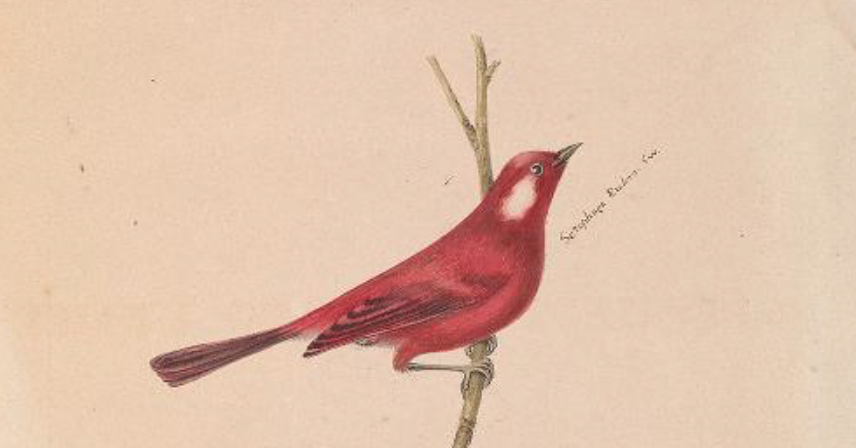 I don’t care that it looks like the cloud of suspicion hanging over that Arizona red warbler is about to break out into a downpour of doubt. I’m still enormously jealous; whether it turns out that the tropical beauty flew from southern Mexico or it crossed the border in the backseat of an Altima, I will forever regret not having seen that flash of red in the ponderosa pines of Rose Canyon.

If the bird is eventually adjudged a plausibly “natural” vagrant, it will represent the first generally accepted record of the species north of Mexico — a very carefully qualified formulation that reminds us that the red warbler had a firm place on official lists of the birds of the United States for nearly sixty years before it was definitively removed in 1910.

Like so many Mexican birds, the red warbler was introduced to western science by the William Bullocks, father and son, as part of their London exhibitions of zoological and anthropological curiosities. Wildly successful for a while, the show eventually, inevitably, lost its appeal, and Bullock, Sr., sold the collection in a famous series of auctions.

Before the birds went on the block, however, he made at least some of the specimens available to William Swainson, who formally described and named the new ones in the Philosophical Magazine for 1827. Swainson gave Setophaga rubra a clear and straightforward diagnosis: the new Mexican warbler, collected in Michoacán, was “entirely red,” its “ear feathers of a silky whiteness.” No mistaking this for any other bird.

That original description was translated into German in the Isis, and Swainson himself repeated it in his 1838 Animals in Menageries, this time based on a specimen in his own collection from Toluca.

A colored plate of the bird, based on an uncharacteristically clunky painting by Jean-Gabriel Prêtre, was published in 1836, accompanying Frédéric de Lafresnaye’s description of what he thought was a new species, the vermilion warbler, brought back from Xalapa by “Mme Salé” (presumably Cathérine Caillard Sallé, mother of the natural historian Auguste Sallé).  Charles Bonaparte corrected Lafresnaye’s error a year later, pointing out that the Xalapa bird was in fact identical to Swainson’s — but committing a lapse of his own in including Guatemala in the species’ range.

And it wasn’t over yet. More than a decade after William Swainson brought the red warbler to the notice of the scientific world, the New York collector Jacob P. Giraud received a shipment of bird skins from Texas, fully sixteen of which represented what Giraud thought were new species. Among them were a striking little creature that Giraud named the white-cheeked titmouse, Parus leucotis. The accompanying plate (at the top of this blog ‘post’) was by A. Halsey, an illustrator far less famous than the engraver, Nathaniel Currier.

The mistaken identity was quickly rectified. A few scant months after Giraud’s publication, George Clinton Leib noted, clearly and convincingly, that he had determined

Parus leucotis of Giraud to be identical with the Setophaga rubra of Swainson,

an observation affirmed “without doubt” by Philip Lutley Sclater a dozen years later.

The truly spectacular aspect of Giraud’s specimen, though, was not the bird’s identity but its origin. Giraud did not secure his type himself, but is quite clear that he acquired it from someone else, most likely his usual New York dealer, John Graham Bell, who was also the collector’s taxidermist of choice.

Giraud took Bell at his word as to the provenance of the Texas shipment, thus inspiring a poorly documented but nevertheless obviously vehement argument about those sixteen “new species” that would go on for a full forty years after Giraud’s death in July 1870.

Spencer Fullerton Baird, the most influential American natural historian of his day, listed the Texas red warbler specimens — Baird, too, owned one, also purchased from Bell — without comment in the list of United States birds he published in 1852. Just six years later, though, Baird bethought himself:

The propriety of introducing this species into the fauna of the United States is questionable. No specimens have as yet been found even as far north as northern Tamaulipas, in Mexico. As one of the birds described in Mr. Giraud’s work, however, it is entitled to a notice.

Baird made it clear just how much “notice” he thought it deserved by changing the locality of the skin in his own possession, USNM no. 561, from Texas to “Northern Mexico,” which he further altered in 1865 to “northeastern Mexico.” The Smithsonian now lists the location where the bird was collected simply as “unknown.”

Others had greater confidence in Bell and Giraud’s assignment of the red warbler to Texas. John Cassin in Philadelphia regretted that “no one of the several American naturalists who have visited Texas” since 1841 had seen the bird, but had no doubt that the Giraud specimen had come from there. Robert Ridgway, Baird’s protégé and eventual successor in the Smithsonian’s bird room, listed the species without comment in his 1881 Nomenclature, though six years later, in the Manual, he queried its assignment to southern Texas. In 1882, Elliott Coues denied the species a place in the main body of his Check List, but in the introduction expressed his belief that it had “doubtless” occurred north of the Rio Grande and could be expected to do so again — a notably more positive assessment than he had given the Giraud record in 1878.

Perhaps the most remarkable document to have come down to us in the matter is a paper published in the Ornithologist and Oologist for 1885 by Wells Cooke, in which Cooke argues vigorously for Giraud’s bona fides.

Considerable doubt has been expressed by ornithologists … but the recent great extension of our knowledge of the avifauna of the Southwestern United States is tending to inspire confidence in Giraud’s record.

Of the sixteen novelties Giraud described in 1841, Cooke reports that nine had meanwhile been encountered again in the United States, some of them turning out to be virtually common. Cooke finds the strongest support for Giraud’s credibility in a horned lark specimen acquired from Bell with the others; that bird, he says,

Mr. Henshaw has at last determined … is a tenable variety found only in Texas. Here we have a very strong argument in favor of Giraud’s good faith.

If he had still been walking this earth, Giraud would have been grateful. He himself “stoutly maintained to the day of his death that they [the specimens he had from Bell, including the red warbler] were taken from Texas.”

The moment of truth came with the publication of the American Ornithologists’ Union’s Check-List in 1886. This first edition comprised not only the species list but also the AOU’s Code of Nomenclature, a long and legalistic summary of the principles governing the naming of birds in that pre-ICZN day. Appropriately, most of those principles are very general in their formulation, taking in as many cases with as much flexibility as possible. It is jarring, then, to come across this decree, directed with painful specificity to a small set of records published by one man 45 years before:

That Giraud’s at present unconfirmed species of Texan birds be included in the List on Giraud’s authority.

This, of course, included the red warbler, assigned AOU number 691 and its habitat given as Mexico and Texas. The committee responsible for the second edition of the Check-list, published in 1895, expressly reasserted the appropriateness of including Giraud’s Texas species, and our warbler is right there in the same place it had occupied a decade earlier.

By 1908, however, as the AOU was preparing to issue the Check-list in a third edition, minds had been changed. In that year’s Supplement, the committee announced unequivocally and with a pair of gratuitous quotation marks that no. 691, the red warbler, was

to be expunged from the List, as based exclusively upon Giraud’s unconfirmed “Texas” records.

When the 1910 Check-list appeared, the introduction’s list of “the principal changes in the production of the new edition” was headed by “the elimination of all species included in former editions exclusively on the authority of Giraud as found in ‘Texas’.”

The AOU’s striking of the red warbler was greeted with general relief. Writing two years after the publication of the third edition of the Check-list, John Kern Strecker noted with snide satisfaction the discrediting of “Giraud’s ‘Texas’ species which should have long ago been excluded from the A.O.U. Check-list,” among them the red warbler. More recent works on the birds of Texas are unanimous in rejecting the species as a genuine member of the state’s wild avifauna: Oberholser calls its occurrence north of the Rio Grande “exceedingly questionable,” and neither edition of the T.O.S. Handbook so much as mentions the bird.

The red warbler is gone, off the table, vanished from Texas birding. But the indisputed occurrence — whatever its circumstances — of the bird in Arizona last week reminds us that it once loomed more prominent on the horizon of American ornithology’s expectations. Who knows? It might someday again.

When hurricanes sweep up the coast,

Leveling all before them,

They often leave in their wake sea-birds,

Now and then someone

Picks up a stranger.

Sooner or later it reaches

A museum and is 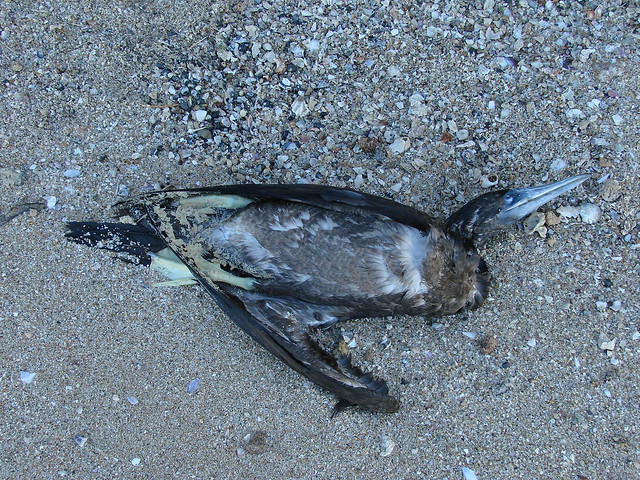