Auguste Ménégaux, who died on this date 78 years ago, was in Le Havre when war broke out in 1914.

A magnificent collection of living hummingbirds from South America, in very good health, arrived at the very moment that war was declared. The poor birds were neglected, and they all died on board the boat before reaching Paris, to the great dismay of their owner and collectors.

The business suffered setbacks in London, too, where

many collectors have been able to sell or trade their objects only at very low prices.

And who knows, Ménégaux asks ominously, what may have happened to the trade in live birds and specimens in Wallonia and Belgian Luxembourg.

We tend to think of the end of consumptive natural history hobbies as the result of a new ethic, the cultural abandonment of practices finally recognized as barbarous. But in fact there were other causes, not the least of them the First World War and the attendant breakdown of the international networks of collectors. 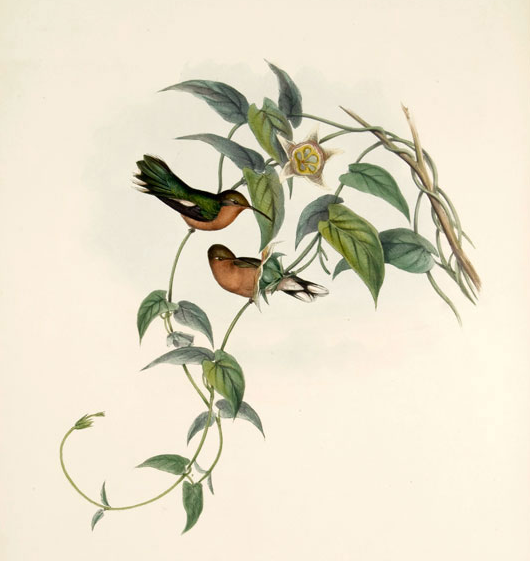 Another sneaky bird, this one a hummingbird, named Trochilus fallax almost 175 years ago. It’s often easy to figure out what the original describer had in mind in styling a bird “deceitful,” but not this time.

When Bourcier and Mulsant named this species in 1843, they were entirely forthright about their lack of confidence in its truthfulness, calling it “deceiver” in both French and scientifickish. But they didn’t tell us why.

What’s mysterious to me seems to have been perfectly straightforward to the namers’ colleagues and contemporaries. When it came time to dismantle the venerable catch-all genus Trochilus, the inventors of new generic names simply came up with what were essentially synonyms to fallax. Charles Bonaparte called it Doleromyia in 1854, “deceptive fly-bird,” and Cabanis created a diminutive Dolerisca, the “little trickster.” 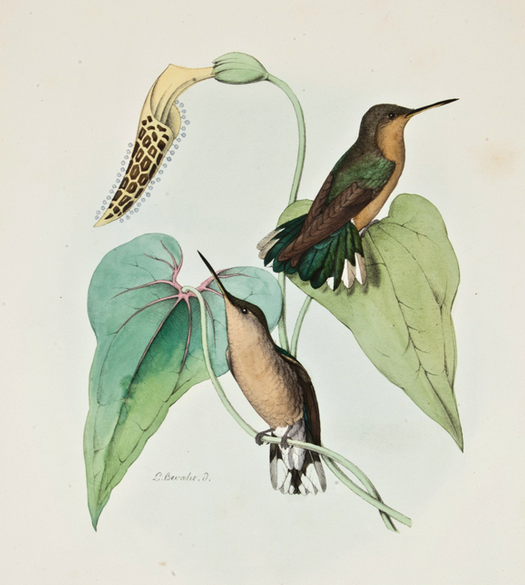 When Mulsant published the Histoire naturelle des oiseaux-mouches starting in 1874, he took over Bonaparte’s genus name, correcting the spelling to Doleromya, and fancying up the vernacular name to “doleromye trompeuse.”

And still not saying why.

The museum in Caen holds the type specimen on which Bourcier based his Trochilus fallax. The specimen is quite well preserved and very carefully prepared…. Externally, this pretty little bird far more closely resembles a Leucippus than any other bird, but the evenly curved bill is very different. The general colors, and in particular the distribution of white spots on the tail, actually recall a miniature Campylopterus saberwing. It is likely for these reasons that Bourcier assigned the species the name fallax.

So there we have it. Or maybe not.

Eudes-Deslongchamps’s mention of Leucippus points in another direction. That name — which happens to designate the genus to which our bird, the buffy hummingbird, is currently assigned — most likely commemorates the Pisan prince Leucippus, who disguised himself as a girl to get closer to his beloved Daphne (it didn’t work out well for either of them, as you may recall).

The bird name was coined in 1849 by Charles Bonaparte, who obviously forgot he’d done so when he devised Doleomyia five years later. Bonaparte doesn’t happen to mention what he intended by adopting the name from classical mythology, but as usual, James Jobling makes a very good suggestion:

both sexes of the buffy hummingbird share the same plumage.

The deceit, then, would consist in each sex “hiding” in the plumage of the other.

I have no doubt that Jobling is right, and that that is exactly what Bonaparte had in mind. The only problem is –and it’s Bonaparte’s problem, no one else’s — that Bourcier and Mulsant weren’t thinking anything of the kind. Their 1843 description makes reference to only one individual, and an unsexed individual at that, so they could hardly have thought themselves tricked by the lack of sexual dimorphism.

Moreover, three decades on, in the Histoire naturelle, Mulsant has no difficulty tallying the characters that distinguish the age and sex classes of this species. But he notes that fallax

shows some similarity to the species of the subgenus Threnetes in certain respects and in other respects approaches various members of the genus Leucolia.

This is not unlike Eudes-Deslongchamps’s observation seven years later — but invoking affinities to a different group of similar species.

I’m stumped. As I go through the sources and ponder, though, I begin to wonder: maybe what is “fallax” about fallax is the name itself, a jocular deception perpetrated on the future by two Frenchmen 175 years ago. 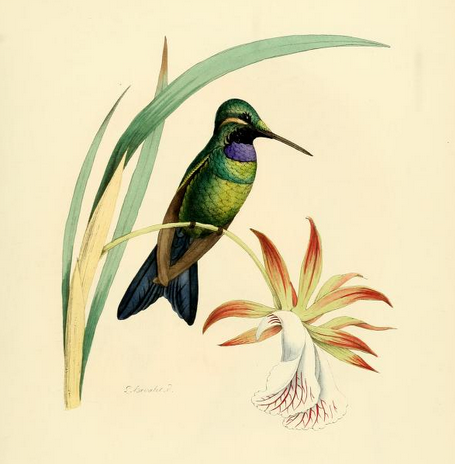 The copy of Mulsant and Verreaux’s Histoire naturelle des oiseaux-mouches on line at the wonderful Biodiversity Heritage Library has a particularly distinguished provenance. Now in the collections of the Smithsonian Libraries, the paper cover of the first livraison of the first volume bears a neat inscription:

To Dr. Sclater, with respectful homage from E. Mulsant.

Can’t get much better than that.

At the conclusion of his research trip to England, Mulsant returned to France

regretting that I had not succeeded in meeting Mr. Sclater in person, as he was then presiding over a meeting of natural historians in Ireland.

Unfortunate as the timing was, Sclater was just about the only British trochidologist Mulsant had not got to know. His guide through the London collections was none other than Adolphe Boucard. An ailing John Gould showed him not only his skins but the drawings in progress for the supplement to his Monograph. Osbert Salvin, on finding himself obliged to leave town for a week, gave Mulsant free access to his private collection. George Loddiges, of course, had died some time earlier, but his sons were eager to let him visit the family collections, which had not yet been moved to Tring.

So here’s a challenge: I assume that Mulsant will have sent copies of the book, or at least that first fascicle, to every one of these kind benefactors.

Can you help me track them down? 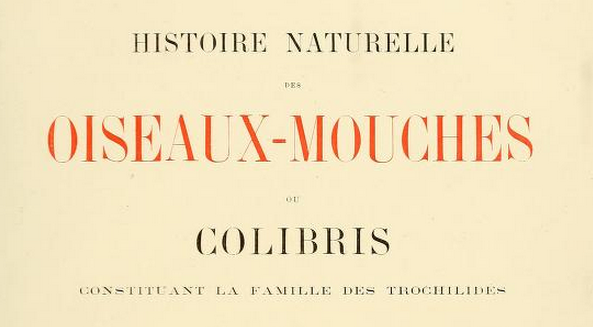 There is a vast, entirely unmanageable literature by and about ornithologists in the First World War. Even that heap of letters and books and articles and memoirs, though, cannot possibly make mention of all the millions who died while the larks trilled above the trenches and nightingales chanted from forests stripped bare.

Instead, we’re left to remember only the famous, among them Wyndham Knatchbull-Hugessen, killed in action at the age of 29, early in the course of the British offensive at Neuve-Chapelle.

Knatchbull-Hugessen had rejoined the Grenadier Guards on returning from a collecting trip to the Neotropics, part of his work with Charles Chubb on what was to have been a monumental, 16-volume survey of the birds of South America.

The first volume appeared in 1912, but on Knatchbull-Hugessen’s death three years later,

so little text had … been completed, and the work as projected was so extensive and costly, that nothing could be done in the way of completing even a second volume….

As often happens, however, the preparation of the text and the painting of the illustrations had proceeded at different rates. The artist, Henrik Grönvold, had made somewhat better progress, and in 1915, the publishers determined that the finished images should be issued even in the absence of the intended text. H. Kirke Swann provided brief descriptions for each of the 38 plates, which included ratites, tinamous, cracids, and a selection of water birds and waders.

Those plates would not be the only ornithological monument to Knatchbull-Hugessen. In 1916, Chubb proposed a new genus name for the spot-throated hummingbird, Brabournea. The name — later shown to be invalid — honored his late co-author, Knatchbull-Hugessen, the baron of Brabourne, killed in France a hundred years ago today. 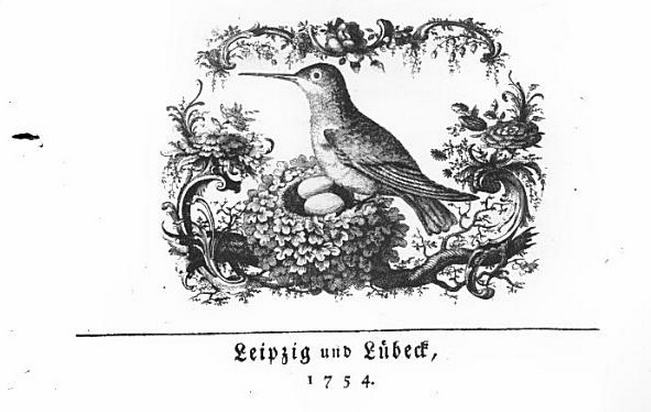 In 1754, the Lübeck merchant P.H. Tesdorpf published his poem “An Attempt at Describing the Most Beautiful and Nearly the Smallest of All Birds, Which Is Known as the Colibrit.” The poem is everything its title promises, but Tesdorpf’s annotations offer the occasional bit of comic relief.

Take this footnote, for example, provided as explication of the strophe in which the poet describes the hummingbird’s valiant defense of its nest:

Should anyone find objectionable the comparison between the bird’s bill [Schnabel] and a fork [Gabel], I would counter by observing that when the birds mean to strike or stab in anger, they often open the bill, thus doubling its capacity to puncture, and consequently transform it into what is essentially a fork. Not to mention the difficult of finding a rhyme for the unavoidable word “Schnabel.”