The most notoriously colorful of English names assigned the common kestrel of the Old World is first attested at the very end of the sixteenth century in Thomas Nashe’s Lenten Stuff, a satirical panegyric on the fish served during Lent. “Filling themselves with wind [to] fly against the wind evermore,” Nashe’s hovering kestrels play the role of flag-bearers in the military campaign to restore a herring to his throne.

The offending name may have been current at the time for the real living bird, too, but it seems to have been used mostly as a crude insult, as when George Chapman sniffed at a certain “envious” such who, like a fluttering bird, could do no more than seek to impregnate the wind.

As far as I know, everyone has assumed—as I long did—that the notion of the hovering kestrel copulating with the breeze was an entirely English conceit. But I no longer believe that. Unless I’ve been misled by wild surmise, the same image was already afloat in Italy in the early sixteenth century.

In his Emblem 83, Andrea Alciato rebukes indolent poseurs—the ignavi—with the story of Asterias, a slothful slave who was transformed into an “ardeola stellaris,” presumably a bittern. Ancient poets, Alciato goes on, used the name ardelio for such a degenerate, “who moves his haunches lewdly in the air like the falcon.”

Leaving aside the catachresis, it is obvious that Alciato is describing the kestrel’s hovering exactly as Nashe and Chapman did. The Latin verb he uses, ceveo, has no meaning other than the prurient one, a counterpart to the better-known criso (from which ornithology has the terms “crissum” and “crissal“). Thus, kestrels appear to have exhibited the same aerial proclivities in Italy as in England—or rather, the Italians and the English seem to have humorously interpreted their motions in the same way.

It is important to note that just as Alciato uses the image of the hovering kestrel disparagingly, all of the English-language citations in the OED are taken from contexts ranging from the satirical to the insulting: none, in other words, applies the offensive label to a real bird. In addition to the quotations offered by the OED, it is also found in Pepys and in Jonson, but there too only as a term of opprobrium for a human, not as a genuine bird name.

Is it possible that the English moniker was in fact never used to straightforwardly denote the bird we know as Falco tinnunculus, and that behind it lurks a jocular, perhaps learned, simile like Alciato’s to the effect that the lazy poseur cevet in the wind like a kestrel? At the moment, at least, that is my suspicion.

“He was the first to depict birds in conjunction with environmentally relevant plants.”

For all his great attainments, Mark Catesby was not really the first in everything, as his fans (among whom I count myself) would sometimes have it.

It is true that Catesby—always in the first instance a botanist—paid particular attention to the relations between the plants and the animals that depended on them, particularly the birds, as “having oftenest relation to the Plants on which they feed and frequent.” In composing his plates, he tells us, he made an explicit principle of “adapt[ing] the Birds to those Plants on which they feed, or have any Relation to.”

But Catesby, working in the first decades of the eighteenth century, was by no means the first to have struck upon such an idea.

More than a century before Catesby set out for Virginia and points south, the Bolognese polymath Ulisse Aldrovandi published an Ornithology in three volumes, the first in what would become one of the most massive natural histories ever, illustrated throughout with carefully prepared—and thoughtfully composed—woodcuts.

Like Catesby 125 years later, Aldrovandi set many of the birds in his illustrations in a botanical environment (and like Catesby, he forwent such backgrounds in the case of most water birds and birds of prey). Aldrovandi’s snowfinch, for example, is shown taking seeds from a millet stalk, identified as such in the caption of the illustration.

This is neither accidental nor merely decorative. In listing everything he has done for his reader, Aldrovandi conspicuously points out that

“I have furthermore included on the plates figures, drawn from life, of many plants and animals which these birds eat or otherwise profit from, or which help them preserve their health or recover from illness,” a neat summary of what Catesby would later call “relations.”

I know of no reason to suggest that Aldrovandi’s proto-ecological approach directly inspired Catesby’s. Instead, the two seem to have come up with the idea independently. But which of them carried it through better?

It’s an invidious question. Consider, though, the two authors’ treatments of the northern cardinal.

Aldrovandi’s bird perches on the branch of a chokecherry. Catesby’s emerges from a cluster of hickory leaves.

Flat and weird as Catesby’s engraving is, there is still a certain elegance to it, while the woodcut from Aldrovandi is so stiff as to almost belie the text’s claim that it was made after a living bird captive in Pisa.

All the same, though, Aldrovandi’s cardinal engages with the plant as a food source; it is as if the bird had looked up from feeding on the cherries and now waits for the observer to turn away. The bird in Catesby is grotesquely dwarfed by the surrounding leaves and hickory nuts, where it appears to have landed entirely by chance: there is no “relation” to be seen here.

It’s quite possible that others before Aldrovandi commissioned pictures intentionally illustrating the connection between birds and their botanical surroundings. What is certain, though, is that the tradition did not begin with the great Mark Catesby. 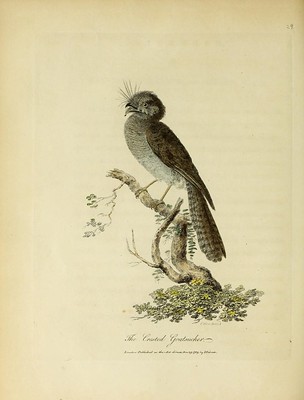 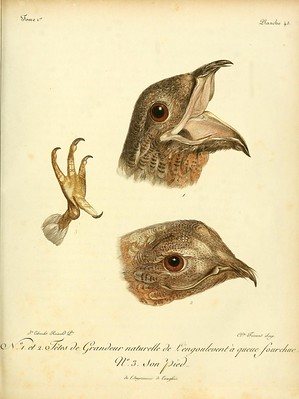 “It’s the most invidious time of the year….”

For all its horrors, 2020 did see the appearance of lots of eagerly awaited bird books. I haven’t read them all–it’s just not possible any more, given the pace of publication nowadays–but here are some favorites among those I have got around to so far. (The cover images are linked to the catalogue pages at Buteo Books.)