It’s here, it’s here, the newest Supplement to the AOU Check-list. No great earth-shattering surprises this time, but a few changes of note to us amateurs. 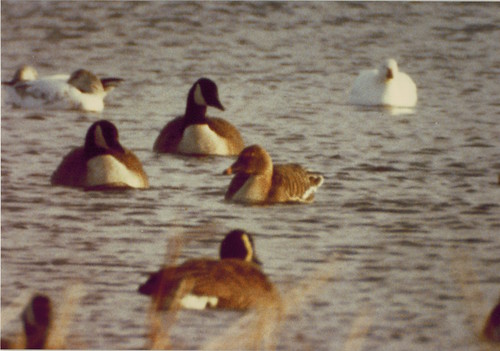 First, the Bean Geese have been split; the species that has occurred in the 48 contiguous US states is Anser fabalis, the Taiga Bean-Goose (hyphen copyright 2007, AOU Committee on Classification and Nomenclature). I was fortunate enough to be half of the CBC team that discovered Nebraska’s first occurrence of this species in 1984, and was proud (I hope not prideful) to see that exciting record cited in the Supplement.

Yellow-legged Gull Larus michahellis has been split from Larus cachinnans, Caspian Gull; the only records for Yellow-legged Gull sensu novo accepted in the Supplement are from Quebec, Newfoundland, Maryland, and DC.

I was startled to read that Sacred Ibis “seems to be on the way to establishment” in Florida after individuals escaped from zoos after Hurricane Andrew. If poor Florida continues on this path, it will be more like escaping into a zoo.

The really big news, though, for those of us who like to collect odd facts for those cocktail parties I seem never to get invited to (wonder why) is the repositioning of the New World vultures. Remember how much fun it was to point out to new birders that “vultures are really storks”? Well, it turns out that vultures are really vultures, and the family Cathartidae has been returned to the order Falconiformes, though with one of those ominous asterisks indicating “uncertainty as to exact placement.” February 22: It started to rain as we returned to Chimino for our lunch, but we were too full of the morning’s excitement to care. Fortunately, the weather cleared just as we were loading our things onto the boat for the return trip to Sayaxche, where our van once again awaited us, and the ride back on the Pasin was as birdful as the ride out had been.

Birding time knows only its own clocks, of course, and so darkness fell well before we were in Tikal that evening. But night time in the tropics has its own allures, and at one point two great saucers of yellow light flashed across the road in front of the van. A bird! We screeched to a stop and looked out the windows to find a Northern Potoo perched on a stump just feet away from our vehicle. Our security escort, a few car lengths behind us, had obviously not seen the bird, and a second later they were pulled up beside us, frantically asking what was wrong, what had happened, what we were doing. Beside us, that is to say, blocking the bird. Our answers were even more frantic, and when we were finally able to make them understand what we were seeing, they generously offered to put a light on the potoo for us.

Regrettably, the only illumination they found to cast on the scene was the blue-and-reds on the roof of their SUV, so for precious seconds we saw the bird in the strobe flashes of police lights. At least the siren didn’t come on, though if it had, at least I wouldn’t have been able to hear someone, unnamed, humming an ABBA tune from the back seat. Feathered rats, RoPi-dopes, pigs in space: How we birders love to hate ’em! Even those of us who confess to a grudging admiration for such aliens as European Starlings and House Sparrows have nothing but scorn for the Rock Pigeon, a filthy beast that, in its nearly worldwide introduced range, has never made the break with its utter dependence on man and his habitats.

But even the most cursory look reveals that like all creatures, Rock Pigeons have a fascinating natural history, as Cornell’s Project PigeonWatch continues to remind us. And the very commensalism that makes so many of us look down on the lowly pigeon means that the species has long enjoyed a special and privileged place inÂ cultural history, too.

Alessandro Croseri’sÂ moving Flight is aÂ brief video homage to one aspect of that cultural history, the role that Rock Pigeons have played in war. Combining historic stills with beautiful images of pigeons flying free overÂ New York City, TheÂ Flight reminds us thatÂ homing pigeons, by carrying messages and evenÂ taking photographs with cameras strappedÂ to their iridescent-feathered necks, saved lives and won battles in theÂ First and Second World Wars. The film does without narration, relying on a somber but appealing sound track and the juxtaposition of images to carry its message. Particularly memorable is the morphing of pigeon wingbeats into artillery fire, and the visual fade of a flock of birds into a squadron of bombers.

Such images might suggest that Rock Pigeons in combat were nothing more than another weapon. But Croseri includes other, equally remarkable images showing the birds and their relationship to their human handlers. Pigeons are cradled and caressed before being sent “into harm’s way,” and their sacrifices are commemorated both photographically and taxidermically. In one of the film’s more bizarre shots, captured ‘enemy’ pigeons are paraded through town in cages, simultaneously spoils of war and prisoners.

Al Croseri is to be congratulated on an effective and moving piece of film-making, and anyone interested in birds and their place in human history is encouraged to watch this film. It will change the way you think about pigeons.

It’s a great idea, the “illustrated checklist,” and as Princeton University Press keeps turning them out, I’m beginning to wonder whether Ber van Perlo may soon become the only illustrator in history to have painted every bird in the world.

Unlike a full-scale (and full-weight) field guide, the Princeton Illustrated Checklists offer only densely packed color plates, with terse facing-page descriptions of field marks, habitat, voice, and distribution. The seven Myiopagis and Elaenia flycatchers in this volume, for example, are dispatched in eight images and 21 lines of tiny type–and share their plate with no fewer than ten other tyrant flycatcher species. A few openings feature as many as 20 species; in the case of the swallows, for example, or the northern warblers, several plumages and attitudes are presented for each species, making the plates so ludicrously crowded as to be essentially useless.

This, of course, is the price to be paid for the PICs’ great advantage, their portability. The standard guides to Mexico, Costa Rica, Belize, and Panama combined would add nearly 10 pounds to the thorough birder’s backpack. The present volume, covering all of the bird species in the AOU area south of the United States, comes in at just over a pound, or about one third the dry weight of Howell and Webb; this truly is a pocket book, easy to carry and quick to consult in the field.

Many birders over the years have devised their own approach to the weight problem: they have their heavy field guides disbound and the plates assembled into a new, slimmer volume for carrying. But the PIC has several advantages over even this Solomonic solution. First, the facing-page captions in the PIC contain voice and habitat information generally found only in the texts of the larger guides. Furthermore, the PIC includes range maps for each of the species covered, a feature absent from the plates of any of the national guides. Complete indices give English, Spanish, and scientific names for each species. And, perhaps most importantly, the PIC illustrates every one of those species, including, critically, a large number of North American breeders for which the standard field guides, in an attempt to save space and weight, provide only a reference to a North American guide.

The paintings, several thousand of them, are the most important component of the PIC. Plumage patterns appear to be depicted accurately, and the level of detail is often surprisingly fine on images so small. Unfortunately, van Perlo has a noticeable tendency to give his birds oddly “friendly” expressions, making even such lean, mean, bug-eating machines as Northern Mockingbirds look downright cuddly. His large parrots grin disarmingly where they should leer threateningly, and I’d hardly think twice at meeting this book’s Great Black-backed Gull in a dark alley. This is unlikely to bother the birder using the volume as a memory jogger, but anyone attempting to learn the birds from this book is likely to be led astray.

The inclusion of voice descriptions is a nice touch here, but the terminology used is not intuitive to a native speaker of English, and the definitions provided in the introductory matter are not carried through in the text. The trumpet of Whooping Crane, for example, is described as “high/very high,” terms defined earlier as corresponding to “the average pitch of a woman’s voice (e.g., oystercatcher).” I know very few women whose voice, absent the judicious application of helium gas, is nearly as high as the squealing of an oystercatcher, and the call of the crane is very much lower. Should this book be re-issued, these voice descriptions will require thorough revision.

The English and scientific names used in the book rely largely on the AOU Check-List, though with a number of unexpected deviations. Of course, the latest revisions (Tringa, the terns) are not included here–or in any other standard field guide for the American continents. Blue Grosbeak is still given its own monotypic genus Guiraca (merged into Passerina a Supplement or two ago), and its English name here is simply “Grosbeak.” The Spanish names are said to reflect Mexican and Costa Rican usage, though numerous local variants are included in the index.

For many birders accustomed to carrying a guide in the field, the PIC will prove a useful and handy aide-mémoire. But it really can be no more than that, and any birder tempted to rely on this as her or his primary guide to the region’s incredibly rich avifauna should resist, and immediately seek immersion in Howell and Webb or in Ridgely’s Panama.