Tucson is full of bearded birder Ricks, and one of them (he is fond of calling himself “the right Rick, not Rick Wright”) found a Laughing Gull at Willcox the other day. Alison and I ran over there this afternoon to see it: a fine bird, if a little ratty, and a new one for my Arizona list.

The English and scientific names of certain gulls make up a strange matrix of equivalences and contradictions. Our Willcox vagrant belongs to a species Linnaeus named atricilla, “black-tailed,” obviously relying on a non-adult specimen of the bird Catesby had already called Laughing Gull. Sixty years later, Vieillot described the Black-tailed Gull, Larus crassirostris (“thick-billed”). Eight years after describing the Laughing Gull, Linnaeus published his description of the abundant European species we know in English as Black-headed Gull; he gave it the epithet ridibundus, “laughing,” a translation of the bird’s common name in a number of other languages. And in 1820, Temminck named the Mediterranean Gull melanocephalus,”black-headed.” To top it all off, Pallas named the bird we know as Yellow-legged Gull cachinnans, another word for–get this–“laughing.”

Got all that? As if gulls weren’t hard enough already….

Sorting gulls this morning at Carter Lake, Iowa, we were startled by the sudden appearance of an adult Peregrine Falcon, which flashed past us to land on a hapless Killdeer. It took off with its squirming prey, only to find itself beset by a brash immature Herring Gull, which chased it acrobatically until it dropped the Killdeer, which flew a short distance and dived into the water, only to be plucked from the surface by a 3rd-year Bald Eagle! The eagle landed in the shallows and plucked and consumed the plover. What a way to go!

Nearly a year ago, I spent a pleasant hour cobbling together an owl box out of scrap lumber and salvaged nails, then another, less pleasant hour trying to fasten the thing into our mesquite tree. This spring, Gila woodpeckers and Gambel quail showed an interest (those quail will nest anywhere, it seems), but the box was empty until today, when I looked up at it–less hope than habit after all these months–to find a tiny gray face staring back at me! 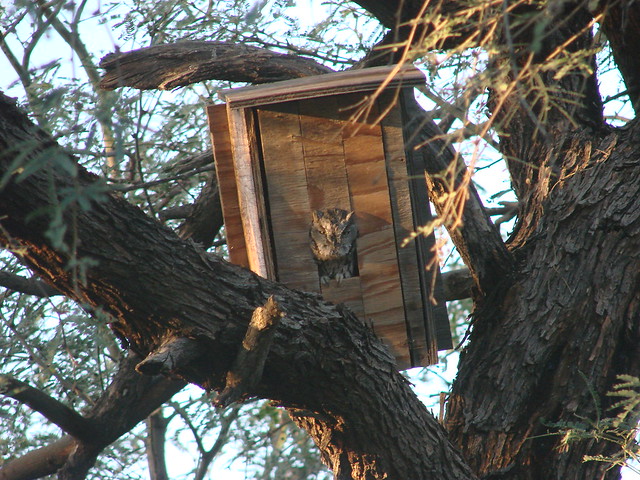 We have a western screech-owl, finally, the first owl ever to occupy any of the clumsily constructed boxes I’ve put up over the years. But now how to keep him in there? I spread some extra seed on the ground under the tree, hoping that perhaps it will draw kangaroo-mice or some other suitably tasty morsel for his dining pleasure.