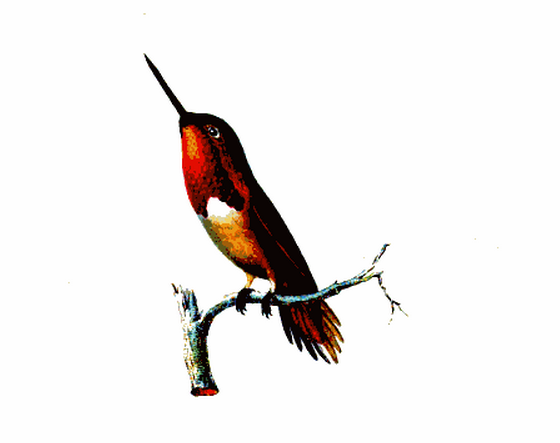 We asked the other day what the quickest set of connections was between the Allen’s hummingbird and the imperial court of Napoleon’s France. Twitter and Facebook produced a few plausible responses, but nothing can match Shannon’s response in the comments on this b-log:

I’m guessing one of the degrees is Napoleon’s ornithologist nephew, Charles Bonaparte (son of Napoleon’s brother Lucien), who lived in Bordentown, New Jersey in the 1820s at his father-in-law’s (Napoleon’s brother Joseph’s) estate called Point Breeze. As Allen’s hummingbird is a west coast bird, and Charles never ventured that far west, the second degree is probably Adolphe Mailliard, son of Joseph Bonaparte’s long-time secretary Louis Mailliard. Adolphe moved to California and died there in 1890. He (or his descendants) perhaps knew Allen?

Yep, that’s exactly the chain I had in mind.

Adolphe Mailliard‘s sons, John and Joseph, both born in Bordentown, met Charles A. Allen in California in 1874; in the early 1880s, the Mailliards gave Allen a house on their Rancho San Geronimo, where he was still living as late as 1927. Robert T. Orr’s obituary of John Mailliard credits the collector and taxidermist with having in large part inspired the brothers’ natural historical interests.

In 1877, Henry Henshaw named what he thought was a new hummingbird for Allen,

but for whose efforts in obtaining the specimens necessary for comparison, and careful field-notes, the species might have remained for a long time still unrecognized.

So there it is: the hummingbird – Allen – the Mailliard brothers – their father and grandfather – Joseph Bonaparte – and the First Empire.

“What he t h o u g h t was a new hummingbird”? For a quick entrée into the muddle that is the history of the Allen’s hummingbird, have a look here.

Well done, Sue! Drop me a note and we’ll work out getting you your prize.

This stunningly beautiful black-crowned night-heron was hunting one of the ponds in Tucson’s Reid Park last week. It was peacefully minding its own piscivorous business until a young human couple approached.

The night-herons here are used to disturbance, and this one stood his stolid ground even as the young park-goers came closer and closer. Finally they were within touching distance, and the man of the couple couldn’t resist showing off to his girlfriend with a series of mock charges at the bird, which simply looked up before turning its gaze back to the possibility of prey.

As I walked past, the couple were still just a foot away from the bird. Just a little bit peeved that they had seen fit to harass the creature (not that it cared at all), I couldn’t resist:

“They’re really tame, aren’t they? But be careful — that bill can go right through your shin.”

The young woman blanched and tugged at her boyfriend’s arm. Last I saw, they were slowly, slowly backing away from the pond and the terrifying heron.

Why not a little quiz? The first correct response in the comments below will win its author a modest prize.

Identify the bird in this photograph: 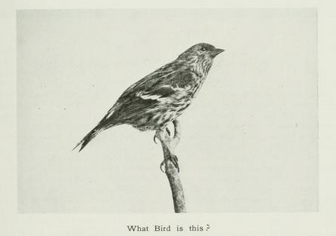 As predicted, this Pine Siskin didn’t pose too many problems for most of us, and the responses tallied pretty much all of the classic “field marks,” including the pointed bill, the small head, the fine black streaking, and the wing markings.

The major “confusion species” for this bird, especially since the 1940s, is the House Finch, females and juvenile males of which are also brown and streaked and fond of bird feeders. There are differences, of course, most of them covered by the respondents to the quiz — the most important, though, unmentioned.

A House Finch, bits of which are visible in the photo above, is a long-tailed, short-winged bird, with the primaries protruding just a short distance beyond the tertials and the wing tip often barely seeming to extend down the tail at all.

Contrast that with the very different rear end of a Pine Siskin:

The long, long primaries of this bird create a noticeably attenuated wing tip extending far beyond the tertials, and that sharp little tail seems barely an afterthought. This is the structural difference that strikes me every time, from any distance, before I can gauge the head size or the bill shape or the wing pattern or the width of the shaft streaks on the underparts.

Over most of the continent, it hasn’t been much of a finch winter. But maybe next year will find more of them at our feeders — and maybe the reminder to start at the rear will make them easier to identify.

Another seasonally appropriate choice from the pages of Bird-Lore.

I don’t think this one will prove much of a problem, but I’m interested to learn just how you identify this species, familiar and abundant over much of North America at the right season in some years.

Answers in the comments, please.