It’s commencement day in Princeton, and one of the questions on everyone’s mind this morning is who the recipients of honorary degrees will be. In 1825, one of them was none other than Charles Lucian Bonaparte, illegitimate nephew of the former emperor.

I don’t know whether the degree was awarded for his ornithological publications or his political engagement, but it was certainly not for his theory on the production of vocal sound by Common Nighthawks:

Sometimes when flying [they] utter a noise, probably produced by air rushing into their open mouth, and circulating in the body.

That speculation was still three years in the future when the Prince of Musignano was granted his A.M. honoris causa. Plus, it’s not true.

As the brother of three immensely talented and enormously capable (and all very different, thankfully) siblings, I know what it’s like to be in the shadows sometimes. Between them, there’s nothing my brother and my two sisters can’t help us out with — generously enough, not one of them has ever come back to me with the request for one of my skills. I’m sure I’ve got some, somewhere.

It must have been even tougher for John Ridgway, the younger brother of one of North America’s most famous and most productive ornithologists. An accomplished taxidermist and illustrator, John Ridgway worked at  the National Museum and for the USGS; he is best known today, if at all, for the series of cards he painted for Singer Sewing Machines. The short obituary that appeared in the Auk — more than six years after Ridgway’s death in 1947 — provides a list of some of the ornithological works that he illustrated. The color plates in Turner’s 1886 Alaska seem to have been a cooperative effort, signed by both John and Robert Ridgway: 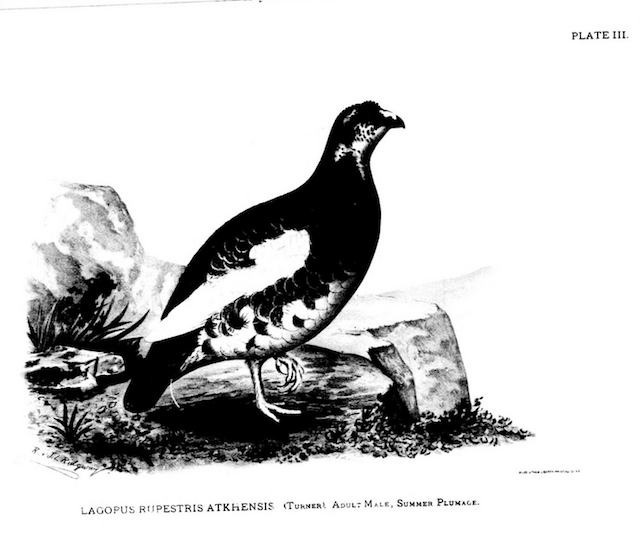 The younger Ridgway alone was responsible for the paintings — old-fashioned but often dramatic — in Fisher’s Hawks and Owls of 1893: 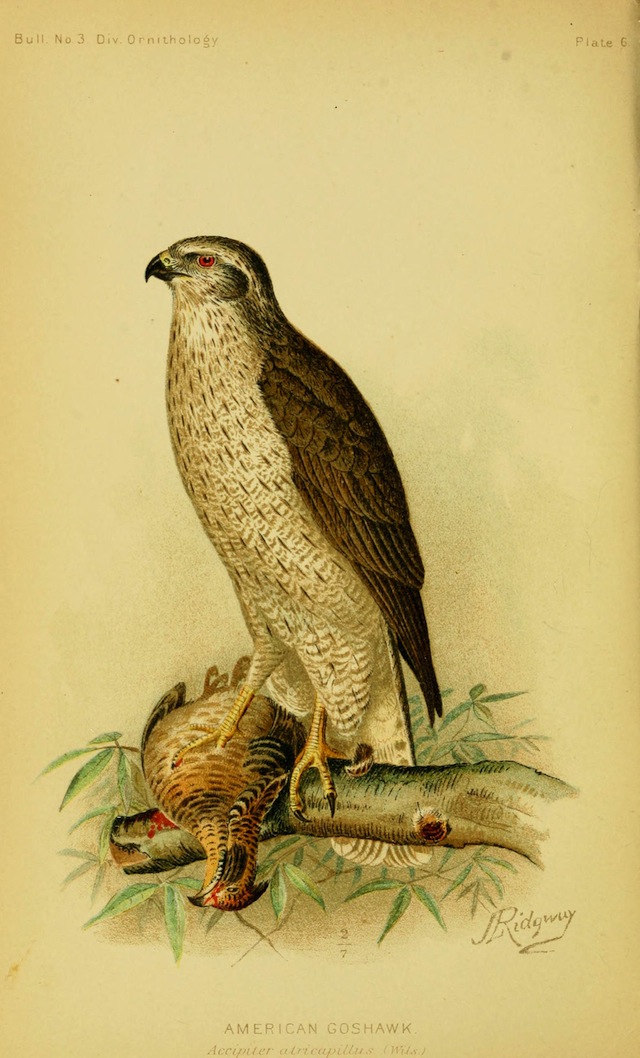 Oddly enough, Palmer’s obituary leaves unmentioned the one great work for which serious birders still remember Ridgway. Charles Bendire‘s Life Histories began to appear in 1892; the two volumes that were completed and published remained the authoritative work of their kind until Bent (and then, of course, BNA).

The paintings were produced by Ridgway, whom Bendire praises for his “skill and painstaking care.”  Joel A. Allen wrote that the plates were “[un]equalled in artistic effect or in faithfulness of execution,” while J.C. Merrill said simply “no superior work has ever been done.” Those encomia and others were cited by Harry Harris in 1927, in his account of an interview with Ridgway, who was then at the Los Angeles County Museum.

Harris adds his own assessment of the egg plates, “the outstanding and pre-eminent achievement in the entire field of oological illustration.” He may well be right, as a look at Ridgway’s paintings of the eggs (numbers 1-6) of the Common Nighthawk shows. 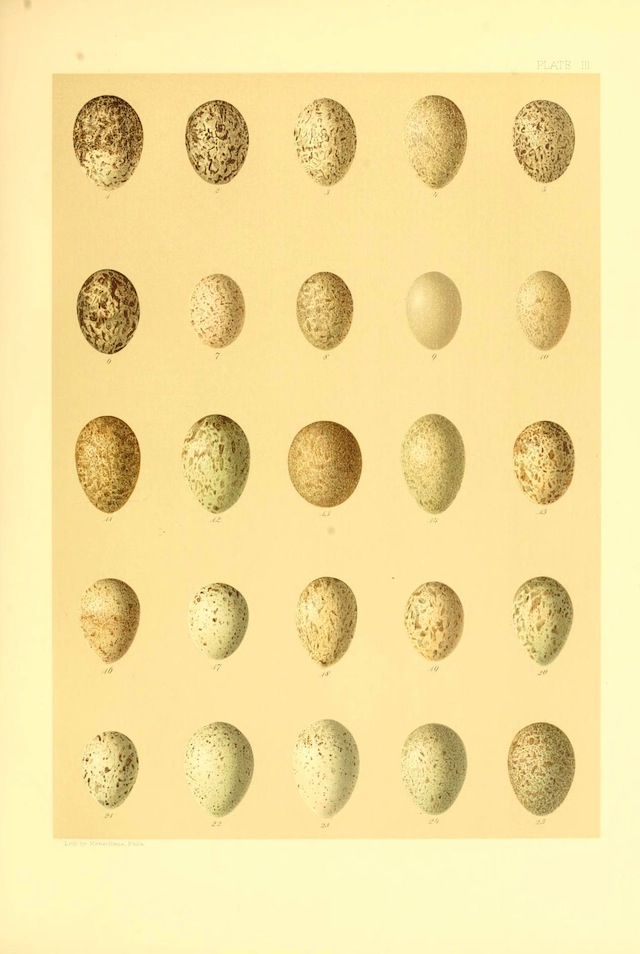 Bendire calls “the egg of the Nighthawk one of the most difficult ones known to [him] to describe satisfactorily.” The eggs differ “endlessly” in shape, ground color, and markings, a range of variation Ridgway’s painting captures very well indeed — and probably better than his more famous brother could have done.