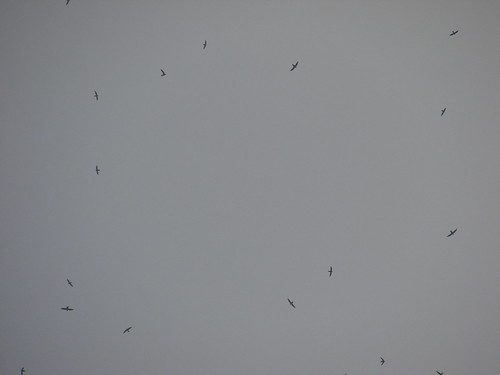 The common swifts are screaming all around as I look forward to meeting the group for this year’s Tuscany tour. Objectively, I suppose, it’s not a pleasant sound, like the screech of a thousand tiny tires on pavement, but it calls to mind so many wonderful spring and summer days from the past that I smile every time I hear it.

Their black plumage, otherworldly keening, and intimidatingly powerful flight aroused dire suspicions in our ancestors, who gave the birds such names as “skeer devil,” “jack squealer,” and “devil screw.” The species was known for its fearsome vengefulness:

A farmer, the owner of seventeen cows, is said to have shot seventeen Swifts in one day, and to have had every one of his cows die within seven weeks.

More sophisticated exegetes, however, found in the swift a range of moral exempla, positive and negative.

With their tiny feet, swifts are limited to either flying or perching, with no capacity for walking or hopping in between. Thus they can be understood to represent

anyone who spurns holy moderation and prefers instead to do either everything or nothing, and so is always running to one extreme or the other.

Such people are wont to rush to the goods of the world and the flesh, but to lie languid when it is time to praise God.

Another behavior of swifts leads us in a different direction, though.

Swifts nest in jagged crevices among rocks…. In the same way, too, as Jerome tells us, the Virgin Mary delivered her child in a cave in the rocks. And so also the soul given over to divine contemplation builds its own nest in caves in the rock and in chinks in the wall — that is to say, in the sacred wounds of Christ as he hung on the cross.

It’s rarely simple when we think about birds.