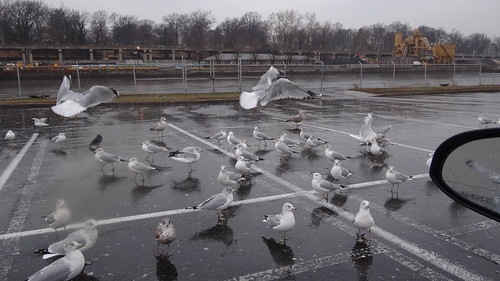 Normal people, on pulling into a rainy New Jersey parking lot, may remark on the abundance of seagulls lurking in hopes of a french fry. But birders maneuver their Subarudes and Prii into the middle of the flock and right away start identifying, aging and sexing the birds they would never, ever, not ever call “seagulls.”

Giving the birds their official labels, applying the official names to the things in front of us, is quite simply what birding is in post-Griscom American culture. Indeed, our stubborn insistence on the link between objects and their names has completely elided the difference between the word and the thing it is meant to denote, such that using the wrong name for a bird has become tantamount to misidentifying the bird — two mistakes that to my mind should be considered as belonging to entirely different classes of error.

An illustration: You may know those two small black and white grebes backwards and forwards, but I defy you to always, without fail, pin each of the names auritus/nigricollis/Slavonian/horned/eared/black-necked to the right bird. It is too easy in the heat of the seawatching moment, especially if you happen to be watching a different sea from the one you’re used to, to blurt out the wrong name even when you have correctly recognized the bird. Only a naive kind of linguistic realism could account that a “misidentification,” but that is precisely the conclusion most birders would come to.

American ornithology has always been more sensible — in principle, at least — in its approach to the function and value of names. The latest, 1998 edition of the AOU (now AOS) Check-list retains the traditional salutary reminder on its title page,

asserted in 1886 as literally the organization’s First Principle in matters nomenclatural. In that same year and in that same document, the AOU (one’s fingers always yearn to type “the fledgling AOU,” don’t they?) affirmed that “zoological nomenclature is the scientific language of systematic zoology, and vernacular names are not properly within its scope,” a principle adhered to in practice by Check-list committees (and their Check-lists) for the next sixty years.

Things appear to have changed in the 1940s (a fascinating story in itself), and by 1957, when the fifth edition of the Check-list finally appeared, the AOU had made its claim to be the authoritative issuer of English names. There was an attempt in the late 1970s by the American Birding Association to reassign that responsibility (remember the “Northern Junco”? The “Thin-billed Murre”?), but    in spite of its adoption in the “new” Peterson of 1980, that alternative list of vernacular names never caught on. 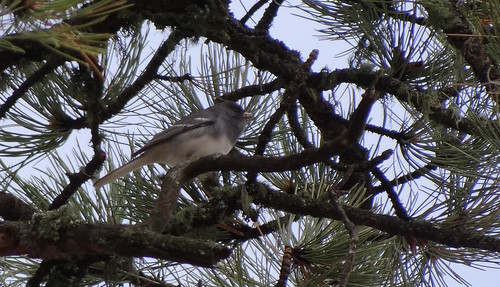 Now, the AOU/AOS committee may be ruing the long-ago day that Eugene Eisenmann and colleagues sat down to produce that first list of “official” English names. The past several years have seen more and more formal proposals submitted to the committee urging the alteration of English names for one reason or another, proposals supported with arguments ranging from the more or less cogent to the downright silly. A few have been ratified by the committee, most rejected — but all take time and attention away from the real work of the committee, the assessment of evolutionary relationships and the alignment of scientific nomenclature to reflect those relationships.

Already this fall two proposals have been published to change English names. One, to rename the Saltmarsh Sparrow as the “Peterson Sparrow,” is entirely gratuitous and will, I trust, be dismissed out of hand by the committee. The other may turn out to be more difficult. 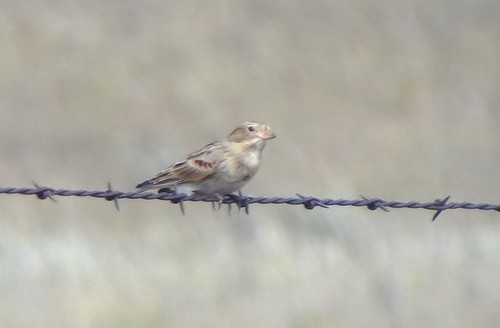 The stunning and little-known McCown Longspur is named for the man who first collected it, in 1851. Ten years later, John P. McCown would join the ranks of traitors who took up arms against their country in defense of slavery.

My first reaction matches that of the proposal’s authors: McCown’s is not a name we should commemorate, especially given that –incredibly, shockingly — there are those who still openly celebrate his role in a treasonous uprising to keep a people enslaved. Elliott Coues, who served on the right side of the Civil War, ultimately called the bird the Black-breasted or (far better) the Bay-winged Longspur, and I now plan to follow his lead in the field.

But it is hard to guess whether the AOS committee will make the same change — not because I suspect the committee of anything like ill will or a lack of understanding, but because the committee is constitutionally (and in most cases properly) so faithful to the ideal of stability in naming. While change has only justified revulsion on its side, there are several plausible arguments in favor of the status quo (slippery slope arguments aren’t convincing):

Lawrence did not claim to be “honoring” McCown when he named the bird; McCown’s subsequent biography is entirely unknown to virtually all those who use the English name; bird names do not positively celebrate their sources as statues and other memorials do.

And then there’s the big one.

A name, the committee pronounced 132 years ago,

is only a name, having no meaning until invested with one by being used as the handle of a fact; and the meaning of a name so used, in zoological nomenclature, does not depend on its signification in any other connection.

Even if saying it didn’t make it so, that statement should be philosophically incontrovertible to all but the most benighted linguistic realists.

And yet: while all can agree that there is nothing essentially McCownian about the longspur, labeling it officially with that name inevitably calls to mind the man and his crimes, even for us good nominalists out there.

Whatever the committee’s decision, this proposal may finally be what breaks the  seventy-year hold of the AOS on the English names of North American birds, freeing field guide authors, birders, even normal seagull watchers to make wise and informed decisions about what they want to call their birds.