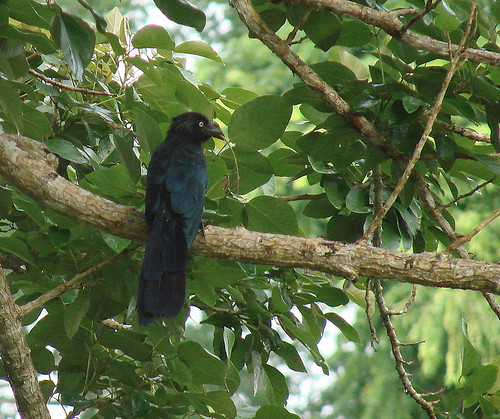 Those weird black cuckoos of the American tropics have been known as “anis” since pre-Columbian times, and the Native name was adopted immediately and authoritatively by the earliest European scientists.

French-speaking colonists, though, came up with another label for the bird.

Piso and Marcgrave had been satisfied to merely describe the ani’s vocalizations:

It calls with a loud voice a single syllable, yiiiiy, rising in the middle.

But the creoles of at least one island colony heard something else.

There are also many small black birds in Guadeloupe, quite similar to European blackbirds, which the inhabitants call “bout de petun,” rolled tobacco, since they believe — just as fools hear bells speak and discover in the shapes of clouds anything they please — that this bird’s song says, “un petit bout de petun,” a little roll of tobacco.

They also called these somber-plumed birds “devils,” inevitably enough, but it was the odd name “bout de petun” that caught the attention of scholars in metropolitan France.

Buffon rejected the earlier explanation of the name as a fanciful transcription of the ani’s song; instead, he argued that this “ridiculous name” could have been inspired only by the bird’s plumage,

brownish black, the color of a plug of tobacco…. The creoles of Cayenne have given this bird a name more suitable to its usual song, calling it the “bouilleur de canari,” referring to the sound made by water boiling in a cooking pot, quite different … from the verbalization “bout de petun.”

Etienne Lefebvre-Deshayes, one of the most distinguished natural historians of the Caribbean, confirmed Buffon’s suspicion.

We wouldn’t say that the bird has a song at all, rather a quite simple whistle or peeping, though there are occasions when it is more varied, but always harsh and unpleasant,

hardly, it seems, the sort of vocalization to be rendered by the bubbling consonants of “petit bout de petun.” 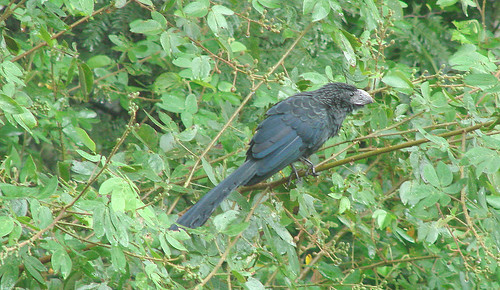 Different ears have different hears, of course. Where Buffon thought it beneath serious consideration that “petit bout de petun” could resemble the ani’s song, Charles Nodier, a polymath genius and authority on (of all things) onomatopoeia, found confirmation for the name’s echoic origin in Buffon’s own words.

Readers familiar with the mechanics of pronunciation will agree that, contrary [to Buffon’s conclusion], there cannot possibly be a better and more natural representation of the sound of bubbling and boiling than the onomatopoetic “petit bout de petun,” which seems to have been formed expressly to echo the sound of bubbling…. the meaning [of those words] is entirely fortuitous and insignificant here,

the most forthright dismissal possible of the older author’s speculation about the tobacco-colored plumage of the ani.

Good to have that settled. Or not.

In his history of Guadeloupe, Jules Ballet turned a powerful hose on the stables by asserting that

the ani and the bout de petun are two quite different birds. The former, which is quite rare in Guadeloupe, has one character [namely, the bill shape] that prevents any confusion…. The bout de petun … is a grackle,

Maybe. Truth is, I can’t hear “bout de petun” in the songs of any of the anis or of the grackle. Deep down, I think the name is probably the product of folk etymology. With no way to prove it, though, I’ll have to let all those dead Frenchmen figure it out among themselves. 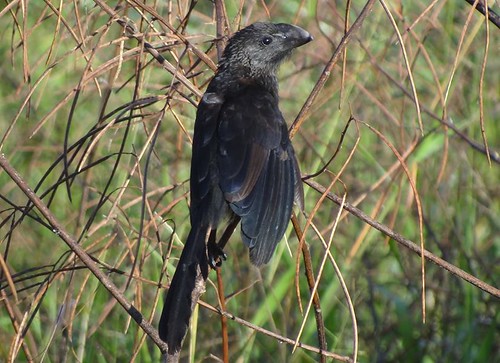