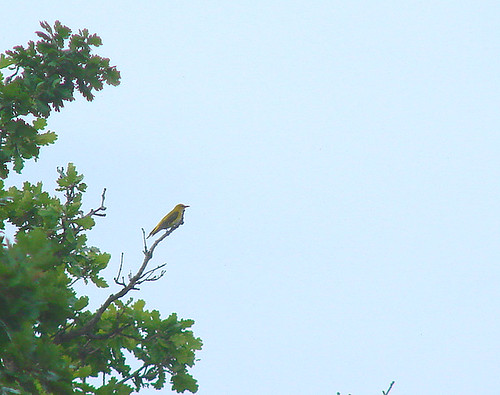 Wow. Yes, this seems to be the best photograph I have of a golden oriole, taken a few years ago in the days leading up to our Birds and Art tour of Burgundy.

But what I’m concerned about this morning is not my photographic aptitude but one of the odder names assigned this lovely bird, the German “Weihrauch.”

“Weihrauch,” literally “holy smoke,” just means “incense.” It’s not impossible that oriolids are fragrant in the hand — plenty of other birds are, from auklets to shrikes. In this case, though, that theory would throw us off the scent, so to speak; instead, “Weihrauch” is the product of that familiar linguistic process called folk etymology. 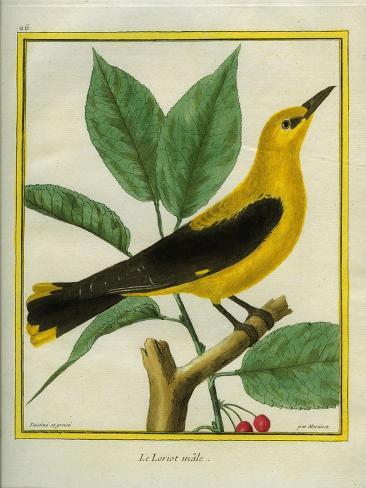 Folk etymology is not the same as fake etymology, the pseudo-scholarly fabrication of connections between words that are in fact not historically related. Want to see some fakes? Just spend a little time on the internet, or even, if you can bear it, talking to people.

Fake etymology is a process of explanation. Folk etymology is a process of creation, in which an unfamiliar word or form is altered to resemble a familiar one. One of my favorite examples: the name “tiger meat” for the spicy midwestern bar food arose, I suspect, from “beef tartare,” when the incomprehensible “tartare” was humorously transformed into an animal name. Good ol’ google turns up plenty of other specimens. 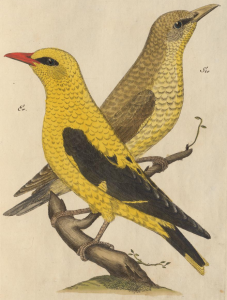 It turns out that among the many, many echoic names given the bird with the golden voice is the German “wîrôk.” (I don’t hear it, myself, but Suolahti tells us so.) Johann Leonhard Frisch fills in the rest of the story:

The two final notes of the bird’s song sound like “i” and “o,” and so “i” and “o” occur in all of its names…. Some have assumed that the name Wyrock, with the long “i” and “o,” must be Low German, and so mispronounce it “Weihrauch,”

self-consciously and hypercorrectly running the name through a High German diphthongization to make it more comfortingly familiar, if semantically a bit bizarre.

Folk etymology becomes especially interesting when its products inspire sometimes fantastic “back stories” to explain them. I haven’t run across any narratives contrived to explain “Weihrauch” (not yet, at least), but the ecclesiastical association may be behind another folk name for the species listed by Naumann — “Bruder Wyrauch,” “Brother Incense.” I plan to use that one from now on myself.