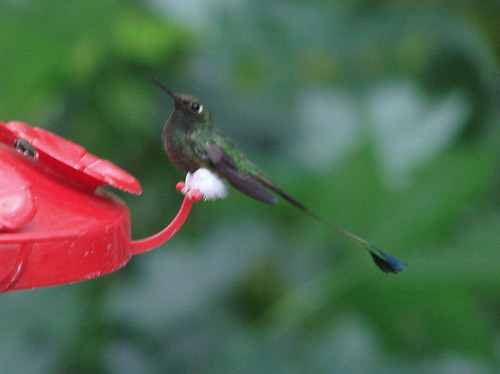 They’re truly implausible little creatures, hummingbirds so tiny as to hardly be there, their feet tucked in to great puffy boots and bizarre spoons trailing behind them.

There used to be (“be”!) just one species, but now — once again — two or three are recognized, differing in the color of their footwear and in vocalizations and other behaviors.

The first description of any taxon of racket-tail was published in 1832 by Lesson, under the scientific name Ornismya underwoodi and the slightly tortured vernacular label “la raquette empennée.” “Ornismya,” which the French trochilidist had coined a few years earlier, is simply the rendering into Greek of the usual “oiseau-mouche,” while the species epithet honors the Englishman who had supplied Lesson with a drawing of the bird, probably the painter Thomas Underwood. 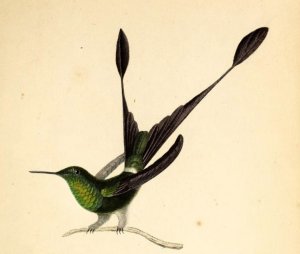 Lesson did not know the bird “en nature,” that is to say, as a skin or mount, but he was assured that there were several specimens in the hands of London collectors of the day.

Indeed, collectors and natural historians had known the bird for some time when Lesson finally got around to naming it. William Bullock had exhibited at least one male in London in the 1820s.

But what neither Bullock nor, apparently, even Lesson knew, and slightly later on neither Jardine nor Gould, was that the “racketed hummingbird” had in fact been described — but not, sadly, properly named — a full fifty-five years before Lesson introduced it as new.

In June 1777, the Paris Journal de physique published a characteristically miscellaneous article describing a beetle, a “water scorpion,” and a hummingbird from South America. The hummingbird was represented by two specimens, one said to be from Guyana — yet another illustration of the danger of confusing collection localities with postmarks.

There can be no doubt about the identity of the hummingbird, which “differs from all other members of the family in the shape of the two long feathers of the tail… Among the birds we know, only this one has the two tail feather widening at the end as is shown in the figure.” Oddly, neither the text nor what I can see of the figure on line offers any information at all about the strikingly puffed feet, which must have been damaged beyond recognition when the birds were collected or prepared.

The article in the Journal de physique gave the new hummingbird no name at all, scientific of vernacular. Very shortly after its publication, though, Buffon and his collaborators provided an account of “this still little known and apparently very rare” species in the Histoire naturelle, naming it the “oiseau-mouche à raquettes,” which means exactly what one might think it means.

Much of their description duplicates the earlier report, and as there, no mention is made of the bird’s remarkable bootlets. Buffon says that he examined a specimen in the famous cabinet of Mauduyt de la Varenne, but it remains unclear whether that was a third individual or one of the two described earlier in the year.

The usual French failure, or rather refusal, to assign a new bird a Linnaean name has kept these earliest accounts of the racket-tail out of the ornithological synonymies. Just as significantly, the failure by Buffon et al. to mention the hummingbird’s distinctively plumed feet allowed the ornithologists of the next generations to “discover” and name it themselves, without recognizing, or at least without acknowledging, the earlier descriptions.

Lesson gives no sign of having even read the 1777 accounts, and John Gould did not think of the “oiseau-mouche à raquettes” when he described his new Trochilus caligatus (“booted”) in 1848; neither did he cite them in the greatest of all nineteenth-century hummingbird books, the Monograph of the Trochilidae.

Obviously, there is no requirement, there is no obligation, for subsequent authors to adduce every single thing ever written about a species. Never has been. But the story of those first booted racket-tails is an important reminder that sometimes the human history of a bird goes back farther — in this case, nearly half a century farther — than the strictly “scientific” record shows.