Thanks to the skill and industry of the members of the NACC, the July 2019 Supplement to the venerable and authoritative Check-list of North American Birds is out now. Much is new, much is new again, and everything is food for good thought.

Most important of all may be the implicit guidance the Committee provides writers and editors struggling with the recent merger of the former American Ornithologists’ Union and the former Cooper Ornithological Society as the American Ornithological Society. It’s a great thing not to have to worry any longer about the wanderings of that blasted apostrophe, but it can apparently be challenging to find the correct and consistent way to identify the work and the works of the three organizations. The NACC here draws us a bright editorial line: The authors and publishers are still to be identified under the corporate names in effect at the time of publication, even as authority and “ownership” have been passed down to the new joint organization. Thus, the author and publisher of the 1998 Check-list and its predecessors is and ever shall be the American Ornithologists’ Union, but the responsibility for that book now belongs to the AOS. Perhaps now we will see less anachronism when the organizations are named in print. 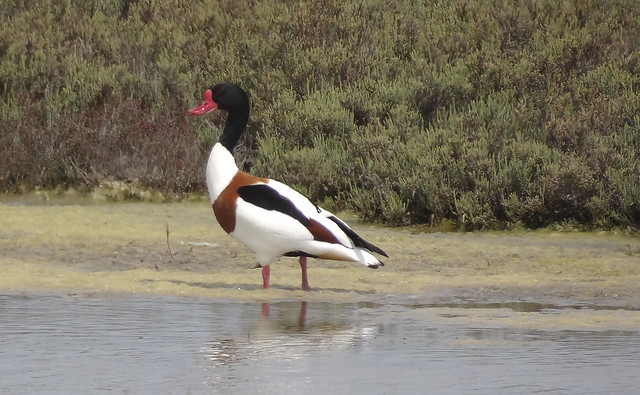 Those of us destined, alas, to spend most of our time birding north of Mexico will find this year’s Supplement adding four species to the list of birds found in the ABA Area. The common shelduck moves to the main list on strength of two Newfoundland records; the Committee notes with apparent (and appropriate) approval Ned Brinkley’s suggestion that many other records from the east coast of North America may also pertain to wild birds, but suggests (again, appropriately) that shelducks found on the Pacific Coast are “more problematical.”

The Cuban vireo, amythest-throated hummingbird, and pine flycatcher also make the list. The vireo and the flycatcher were long-awaited species, each of them discovered exactly where one might expect: two separate Cuban vireos in two successive Aprils at two southern Florida localities, and the pine flycatcher in early summer 2016 in Arizona’s Santa Rita Mountains. Calling these records “long-awaited” and “expected” should not let us forget that birders’ detection, identification, and documentation of these subtle species was a significant achievement.

The amythest-throated hummingbird’s second occurrence north of the Mexican border could be described in much the same terms: a male photographed in the Davis Mountains of Texas in October 2016. But little could have been less expected than the first, a male discovered in Quebec a few months earlier.

Changes to English names are always of particular interest to us birders. The red-breasted blackbird, familiar to travelers to the American tropics, is now known as the red-breasted meadowlark, an eminently sensible revival of a name more clearly reflecting the bird’s appearance and evolutionary affinities.

The replacement of the name “gray jay” by “Canada jay” probably represents the only act of the NACC ever to have penetrated into the semi-popular consciousness, thanks to efforts over the past couple of years to have the species declared the national bird of Canada. The Supplement lays out the arguments in favor of this nomenclatural innovation, unfortunately leading off with the misapprehension that the new name “was used for P[erisoreus] canadensis in the first and second editions of the Check-list” and concluding with the one truly cogent observation that the use of “Canada” for this bird “is symmetrical with the geographical names of the other jays in this genus.” I have (and can have) no objections to the Committee’s conclusion, but it is poor strategy to argue from the sloppy typography of others. 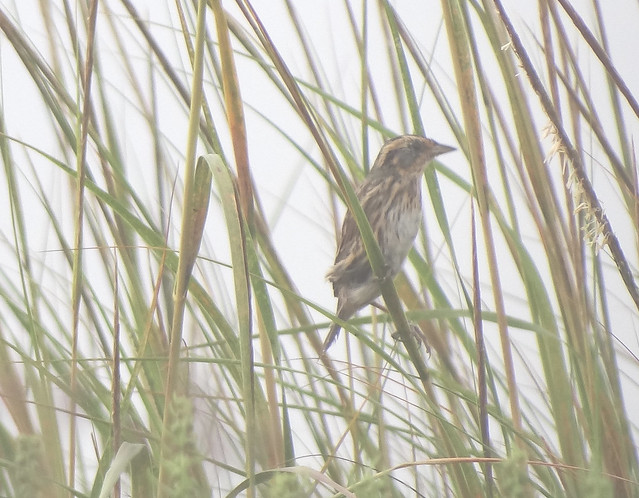 Taking the view from taxonomic eternity (which is, what, about eighteen months?), alterations to official vernacular names are trivial to the point of irrelevance, and I am mildly surprised that the Committee still spends its time on such matters.

Of far greater significance are the Committee’s determinations of phylogenetic relationships, relationships that are expressed in formal scientific nomenclature. This Supplement offers two big changes of interest to birders in the US and Canada, one in the passerellid sparrows, the other in the woodpeckers.

In keeping with the latest genetic work, the Committee (re-)splits the old catch-all genus Ammodramus, leaving under that name only the grasshopper sparrow and its two South American relatives. 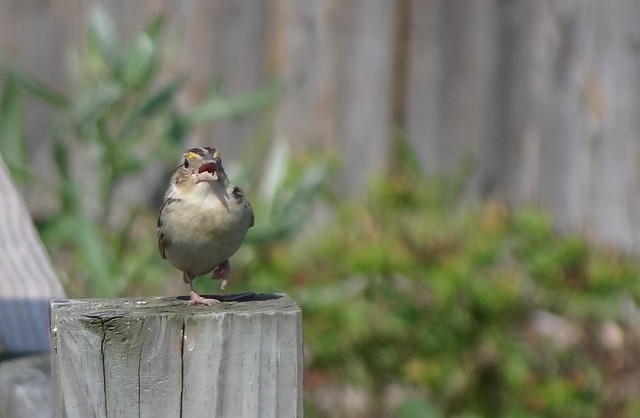 The Baird and Henslow sparrows are returned to the genus Centronyx (“spurred nail”), a fitting restoration given that the genus name was coined by none other than Spencer Baird, eponym of the ochre-faced sparrow of the northwestern Great Plains.

The LeConte, Nelson, seaside, and saltmarsh sparrows return to Ammospiza (“sand sparrow”). I can imagine that the various Seaside sparrows are destined to find themselves re-split at the generic level someday, too, in which case Oberholser’s Thryospiza would apply to them.

Even in making these splits, the Committee kept the Ammodramus, Centronyx, and Ammospiza sparrows together in the Check-list‘s linear sequence. This is not in accord with recent studies finding that Ammodramus (in its new, strict sense) diverged from the others very early on; I expect that the position of this genus will shift in another Supplement one of these years. 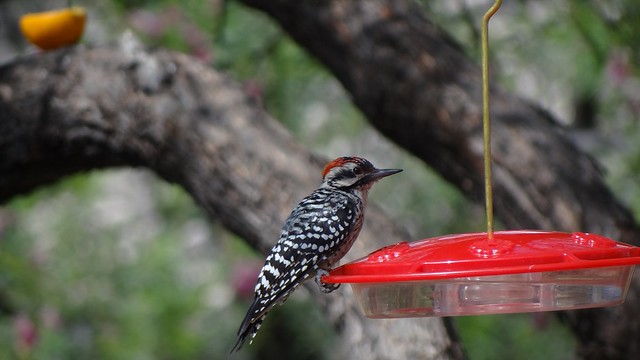 The large woodpecker genus Picoides has also been split, retaining (in North America) only the six-toed black-backed and American three-toed woodpeckers. All of our other “pied woodpeckers,” including the downy, hairy, Nuttall, ladder-backed, red-cockaded, white-headed, and Arizona woodpeckers are placed in Dryobates (“tree runner”), a genus name replaced long ago, in the Twenty-second Supplement, by Dryocopus.

Changes in family assignment are even less frequent than those in genera. The storm petrel family Hydrobatidae is now split in two, the new family of Southern Storm Petrels going under the name Oceanitidae and including the Wilson, white-faced, and black-bellied storm petrels and their congeners. 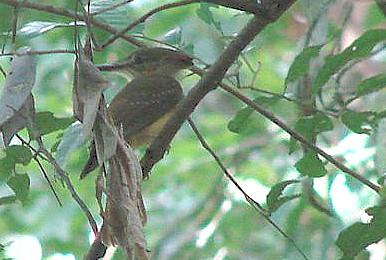 Another new family includes several “flycatchers” known (so far!) only from south of the southern US border. The family Onychorhynchidae now includes the ruddy-tailed flycatcher, the flycatchers of the genus Myiobius, and the royal flycatcher(s). That (or those) last species are officially burdened with a hyphen (“royal-flycatcher”), and I imagine that the others will be, too, at some point.

The species-level splits here will be of interest to birders lucky enough to travel in the southern portions of our hemisphere. Among them is the division of the red-eyed vireo into “our” familiar northern species and the resident Chivi vireo of South America. 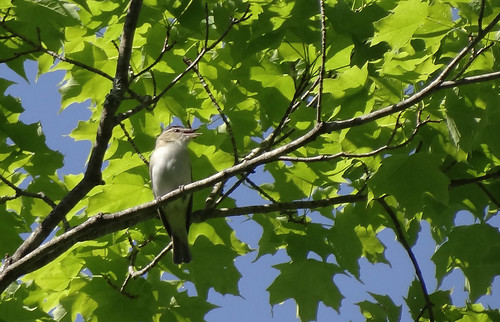 The tufted flycatcher, suddenly familiar to many birders thanks to its continued (and probably increasing) presence in southeast Arizona, has also been split; the southern bird is now known as the olive or olive tufted flycatcher. 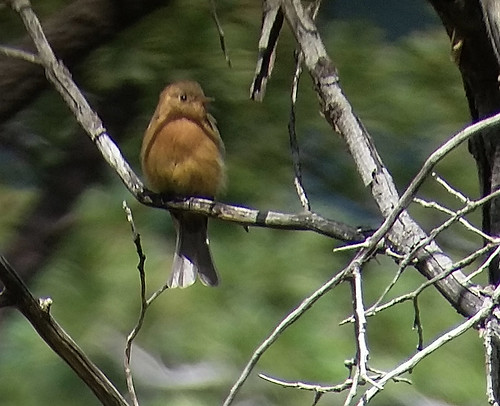 This is far from the only change in our understanding of the tyrant flycatchers. The entire family has been reorganized to reflect a new scheme of subfamily allocations, and the linear sequence of species has been altered as well.

The same fate has befallen the family Accipitridae. Most striking here is the fact that the kites, once thought of as somehow belonging together (and so depicted in most field guides), are spread over three subfamilies: Elaninae for the pearl and white-tailed kites, Gypaetinae for the hook-billed, gray-headed, and swallow-tailed kites; and Acciptrinae for the Mississippi and plumbeous kites, which fall in the new linear sequence between the Steller sea eagle and the black-collared hawk. 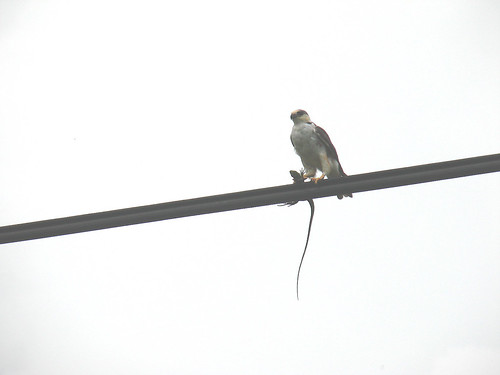 As always, there is a great deal more to read and to ponder in this Supplement, and as always, some of the most interesting actions are those the Committee declined to take. Thus, for example, we still have two species of bean geese, but only one Cory shearwater and Mallard and barn owl and Audubon shearwater and LeConte thrasher and white-eared ground sparrow. 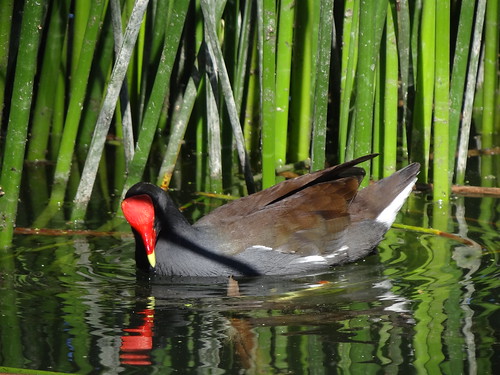 Given the Committee’s activism in the case of the gray jay, I am surprised to find that they declined to change the eminently confusing and uninformative English name of the common gallinule — but grateful that they left the official vernacular name of Columba livia alone.

What will next year bring? Your guess is as good as mine, and probably better, but it won’t be long before the first proposals for the 2019 Supplement appear. Stay tuned.