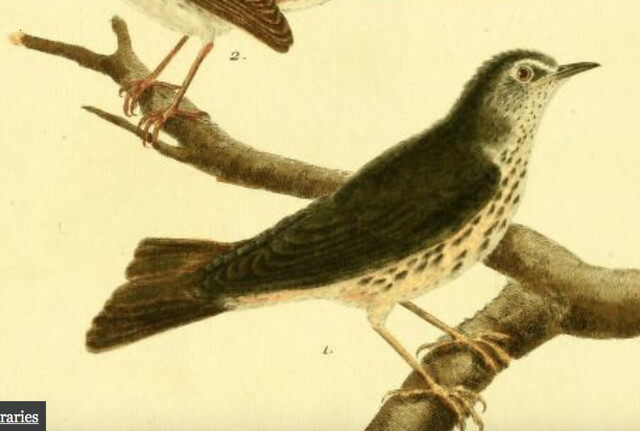 Yesterday I set out, naively, to write the history of waterthrush identification in a paragraph or two. The matter turns out to be even more complicated than one would expect for a pair of little brown birds whose type specimens are not preserved and whose nomenclatural past is a snarled steaming mess.

Sometimes giving up is indeed the better part of valor. But I did learn a few things along the way — among them, just how hard it was to even figure out how many waterthrushes there are.

I’d assumed that European science knew only one before 1807, when Vieillot formally described the Louisiana waterthrush (from specimens taken in Kentucky!). In fact, though, it is evident that even those natural historians who recognized only one waterthrush species actually had access to specimens of both.

Consider this account of the northern waterthrush from the Histoire naturelle of the count de Buffon and his collaborators, which concludes with the description of

another warbler, also sent to us from Louisiana, whose plumage is a cleaner gray and shows only sparse streaking; the underparts are whitish, with a hint of buff on the flanks ….

This can only be the bird we know today as the Louisiana waterthrush — except for Buffon’s puzzling assertion that this second bird’s bill is smaller than that of the northern. I suspect that this is a slip of the pen, and that “le premier” should actually read here “le second” and vice versa.

In any event, John Latham and Thomas Pennant both followed the Frenchman’s lead in recognizing two species of waterthrush. Latham called the second the “umbrose warbler,” Pennant — even less felicitously — the “dusky warbler.”

It took the genius and industry of Louis Pierre Vieillot to straighten things out, aligning plumage and bill size in the way we do today. Unfortunately, and incomprehensibly, his description of the bird now known as the Louisiana waterthrush was unknown to Wilson, to Nuttall, and to Audubon.

Audubon would go so far as to declare himself the discoverer of the Louisiana waterthrush, describing it as a new species (and, naturally, “extremely delicate eating”) in 1841, only to explicitly recant eight years later:

although I was for many years convinced that two distinct species have been confounded under the name of Water Thrush, yet a more strict examination of individuals of these supposed species has induced me to … consider [them] as belonging to one and the same species.

Not until 1858 was the Louisiana waterthrush authoritatively resurrected, and even then it would be some decades before the birds and their scientific names were correctly matched up — but that’s another fragment of the story.