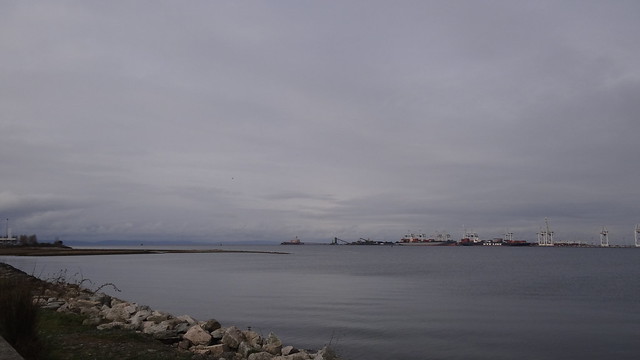 Another great day, though the weather was less welcoming than yesterday’s. When I set out to pick Soheil up about 7:15, the clouds were high and thin, but we birded the Tsawassen jetty in occasional sprinkles and mist, Maplewood Flats in light rain, and Port Roberts — on the other side of the international boundary — in steady rain. But who cares? Lots of birds!

We timed it to arrive at Tsawassen with a good hour and a half of rising tide, hoping that the water would push some shorebirds into sight on the rocks. It’s worked before, but not this morning: the flock of half a thousand dunlin and a hundred or more black-bellied plover stayed out of sight most of the time, visible only when it was startled into flight by some activity at the ferry terminal. 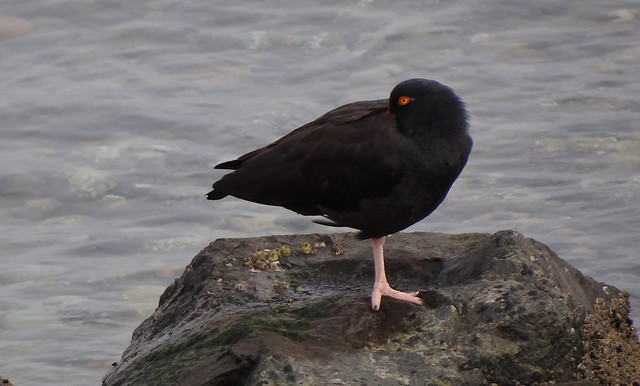 Black oystercatchers, happily, were more obliging. A pair was roosting on a gravel bar in the little mitigation marsh, and at one point a mad chase took place over our heads, with two trios flying low overhead with shallow, stylized wingbeats and incessant piping calls, bills pointed downward. The loafing pair wasn’t much interested in joining in, but instead flew over to the jetty beneath us, tucking their bills in disdain for their fellows who hadn’t got down to the serious business of napping as quickly as they did.

Lots of pelagic cormorants, common goldeneye, and horned grebes shared the waters with white-winged scoters, greater scaup, and a few common loons. The great spectacle, as usual at the site, was the black brant flock, hundreds of birds on the water, in the air, and on the gravel bars. 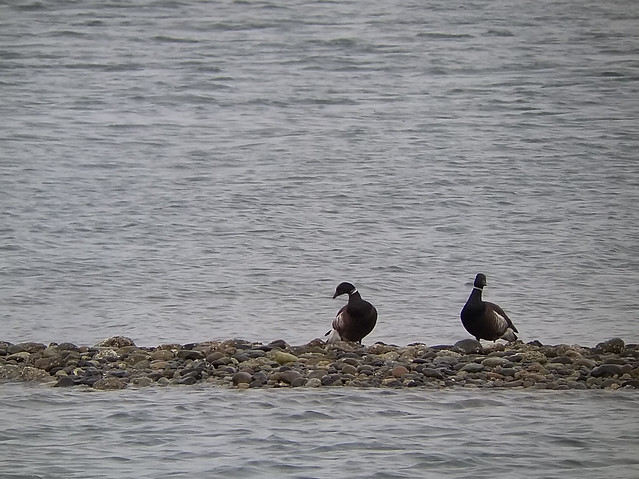 Other waterfowl may be more colorful, but few are as elegantly attired as these somber beauties.

The weather seemed to be getting no worse, so we decided to make hay while the … well, that isn’t really suitable for Vancouver; in any event, we drove north to Maplewood Flats, hoping for a pleasant walk and some birding. We had both, though the rain was noticeably heavier by the time we’d walked as far as the little salt marsh. 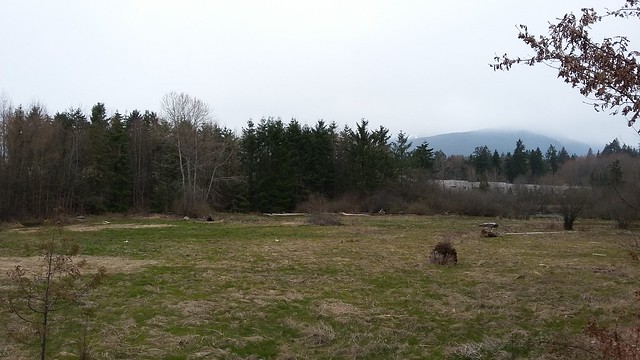 Shorebirds were disappointing here, too (read: absent), but there was a good selection of ducks on the water, including both common and Barrow’s goldeneye and at least one dapper male Eurasian wigeon.

The feeders were busy with dozens of Oregon juncos and American goldfinches; a fine male rufous hummingbird fed from the flowers, and the couple of pine siskins we found were our first for the trip, as was a ruby-crowned kinglet high in the cottonwood twigs. A very pleasant surprise was two male mountain bluebirds in the marsh, hunting the spartina as if it were buffalo grass.

This was only the second time I’d seen that species in Vancouver, after an early morning encounter on Jericho Beach when we lived in Kitsilano.

Fish and chips called, and we watched the rain settle in for real as we ate. The postprandial stroll we’d planned lost its allure with each raindrop; we decided instead to drive down to Point Roberts, that little disjunct dab of Washington State. I’d been there before only to mail packages, and was excited to get to bird this famous spot in spite of the drizzle. 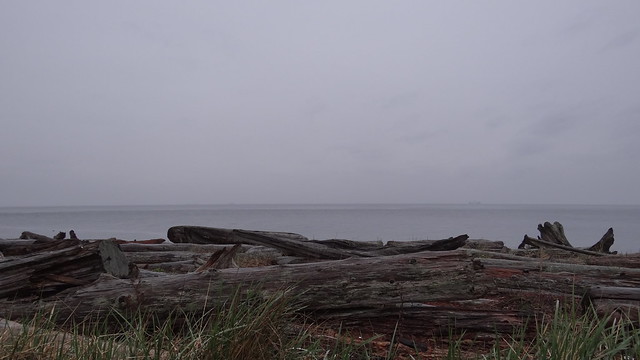 It was wet enough by the time we arrived at Lighthouse Park in the late afternoon that we simply sat in the car and watched the birds go by. And the mammals, too: we had at least five California sea lions, that many of more harbor seals, and a good dozen or more harbor (apparently) porpoises. Long-tailed ducks and surf scoters flew by continually, as did plenty of pelagic cormorants and black brant. I’m eager to go back sometime when it’s a little warmer and a little dryer — it would pay off well, I think.

Tomorrow morning, with more rain in the forecast, we’re going to start by taking the ferry to Victoria and back, then see if we can find something indoor to do. My vote: the anthropology museum at UBC, where we’re certain to see birds, too.