One hundred seventy-five years ago today, John James Audubon boarded a train in New York City and began an eight-month journey that would take him up the Missouri River as far as what is now the Montana state line. The party also included the painter Isaac Sprague, the taxidermist John G. Bell, and Audubon’s friend and frequent funder Edward Harris — each of whom lent his name to one of the bird species discovered (or, in Harris’s case, rediscovered) in the course of the trip. 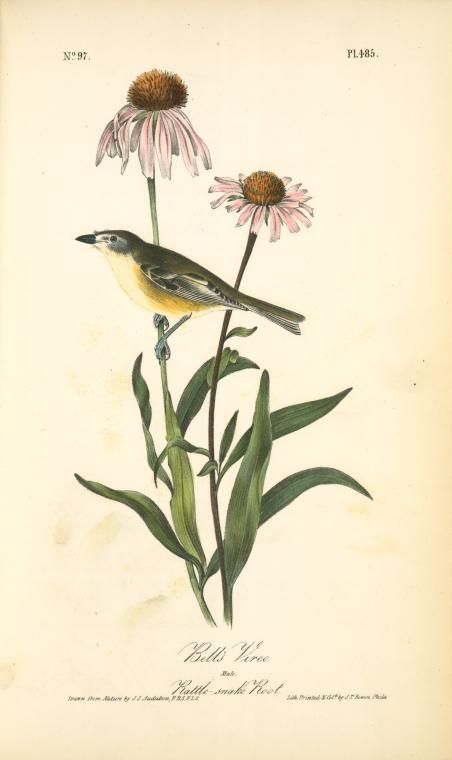 Bell would return to New York after the journey, where he would operate the city’s most successful taxidermy shop and go down in history a second time as mentor to a young naturalist named Theodore Roosevelt. 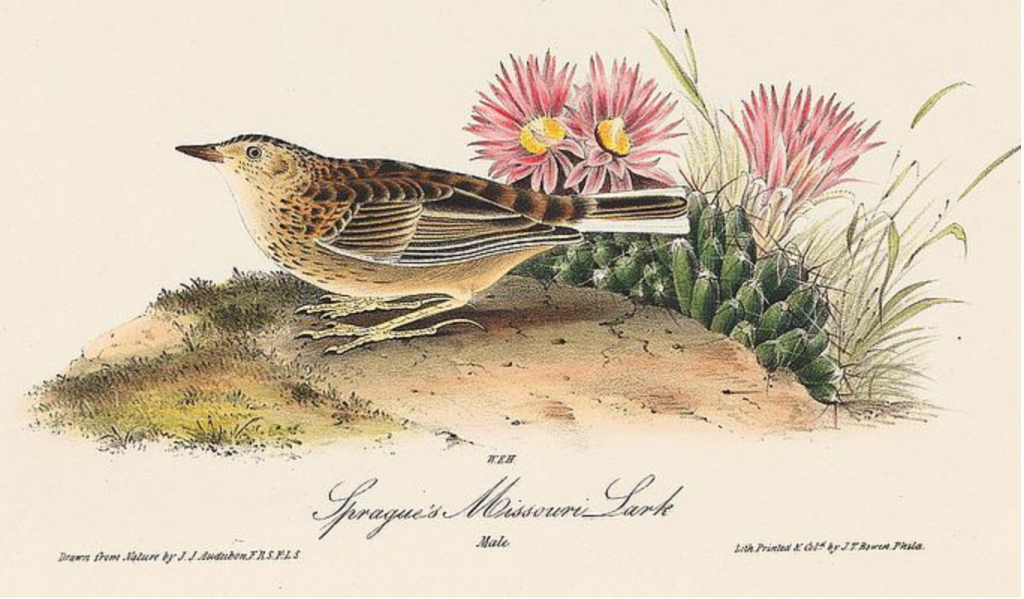 After his return to Massachusetts, Sprague became one of the nineteenth century’s best and best-known botanical illustrators. 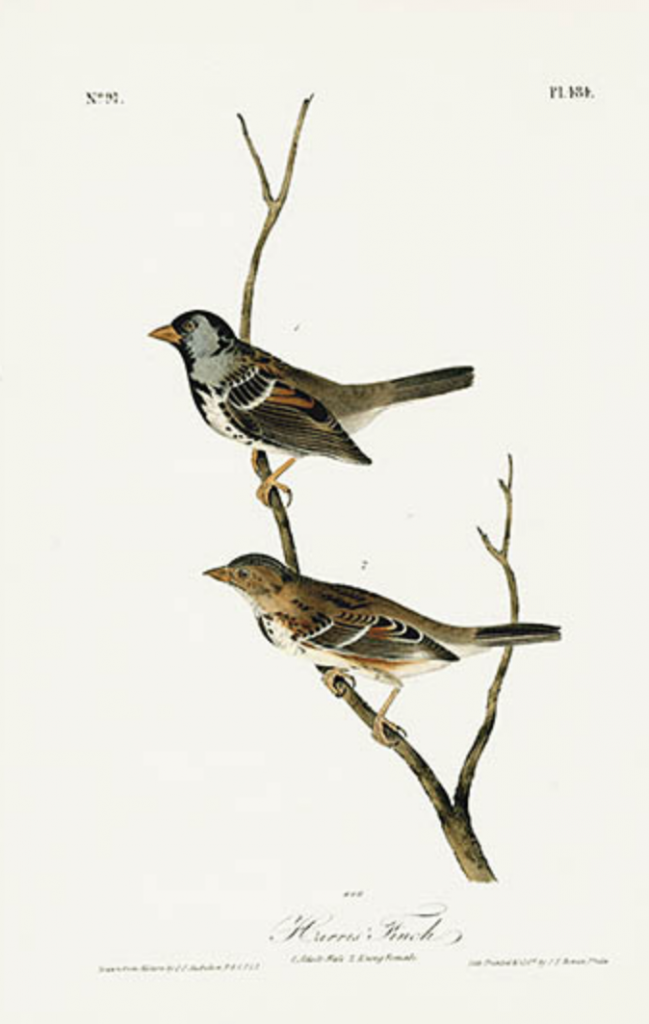 Harris, most famous as the great American champion of the Percheron, went back to his New Jersey farm. The only member of the expedition to keep up contact with the Audubons, Harris would no doubt have been of lasting help to the widowed Lucy, as he had long been to her husband, had he not died himself at the early age of sixty-three.

Early on, Audubon also invited his young protégé Spencer Baird to take part in the journey. Baird, who turned twenty in the winter of 1843, eventually declined, but Audubon remembered his young friend in naming another new sparrow, collected that summer in the grasslands around Fort Union. this would be the last new species Audubon would discover — though, of course, it was Harris and Bell who actually found and shot the first specimens. 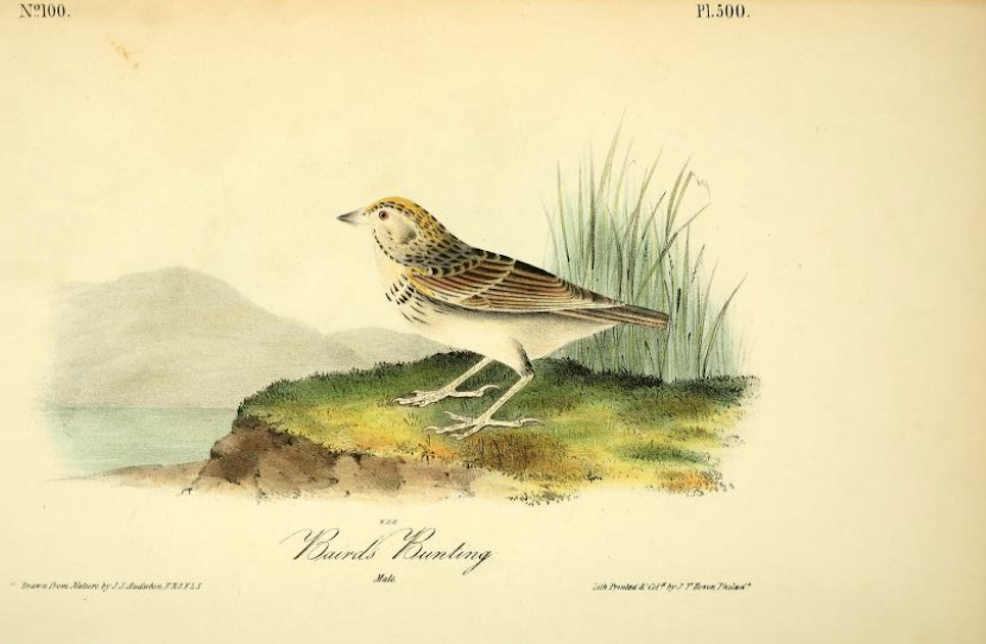 William O. Ayres was another of Audubon’s young friends; like Baird, he would make significant contributions to American ichthyology. Six years older than Baird, Ayres was employed as a teacher in 1843; a dozen years later, he took his medical degree at Yale, and later served as curator of ichthyology at the California Academy of Sciences. It hardly matters that “his” woodpecker turned out to be a hybrid or backcross of the kind so abundant on the Great Plains. 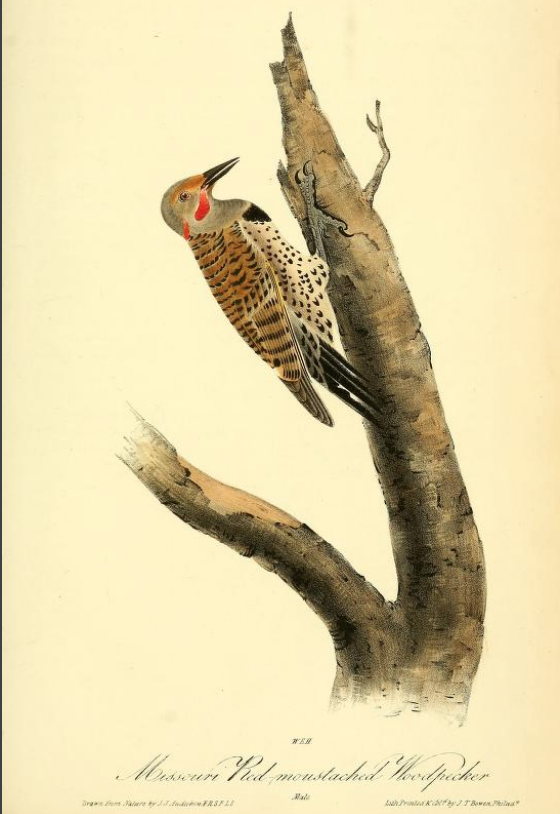 The Harris sparrow, which Audubon’s party collected again and again as they moved up the eastern edge of Nebraska in May, had actually been named and described three years earlier, by Audubon’s colleague and correspondent Thomas Nuttall. There is an especially good story behind this mix-up, but this was not the only time that Audubon mistook a bird he found on the Missouri for new. 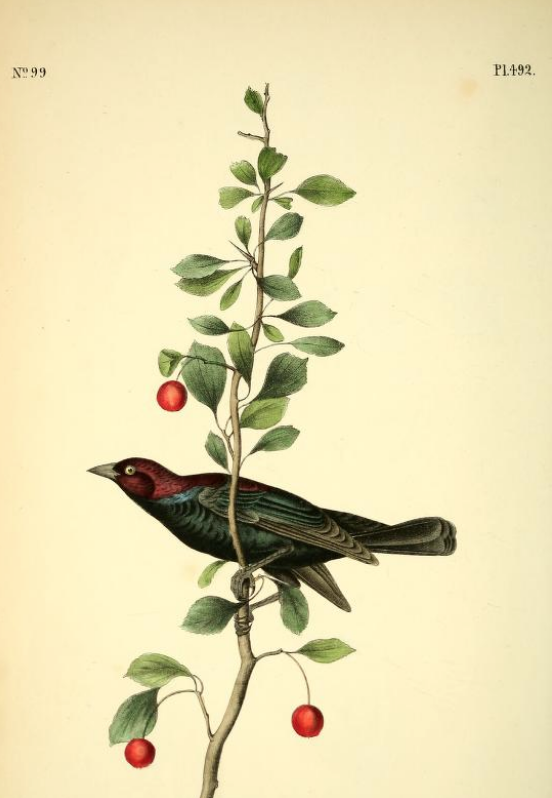 Looking back, it is not much of a surprise that Audubon should have been unaware that the blackbird he would name for Thomas Mayo Brewer was already known to science: the formal description had appeared in the Isis for 1829, and the more readily accessible reprint was still almost fifty years in the future. It would be even less reasonable to expect him to have recognized his “new” icterid in Fernandez’s cacalotototl. 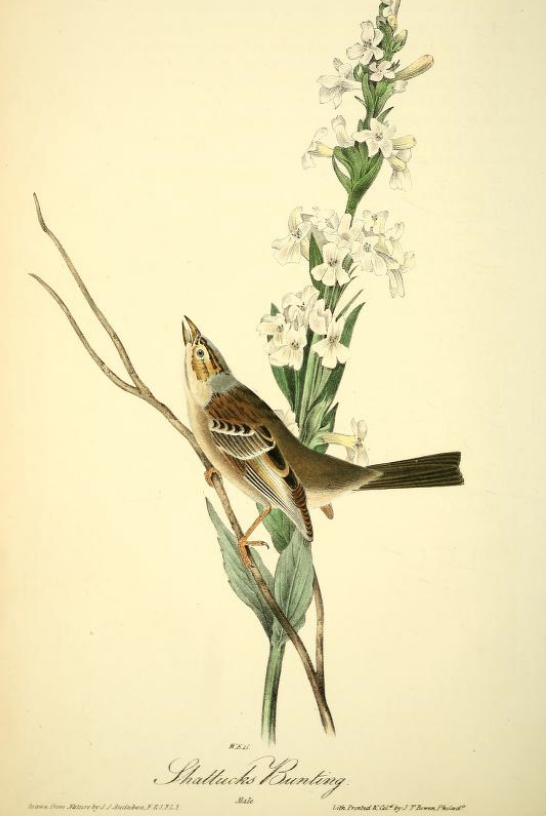 Audubon’s failure to recognize the clay-colored sparrow, abundant all the way up the river that spring and at Fort Union all summer, had more complex reasons. Unaware that the “clay-colored” he had painted almost a decade earlier was in fact a Brewer sparrow, Audubon named what he thought was a new species for George Shattuck, his erstwhile companion on the trip to Labrador a dozen years earlier and subsequently a doctor in Boston. The confusion was cleared up not long thereafter, but the name “Shattuck” could still be encountered for this species into the early twentieth century. 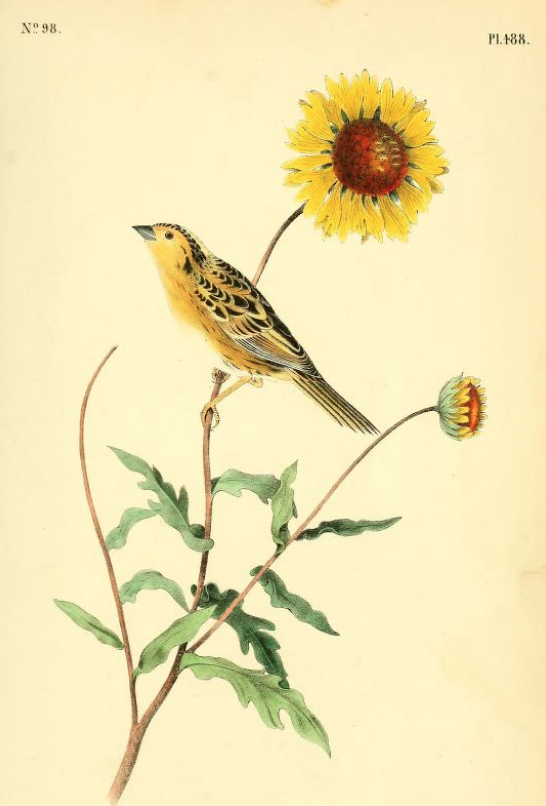 Audubon really does not deserve to be accounted the discoverer of the sweet little LeConte sparrow, but two unfortunate circumstances — the early naming of the saltmarsh sparrow, and the explosion of the steamboat Assiniboine — would mean that neither John Latham (who published the first description in 1790) nor Maximilian zu Wied-Neuwied (who collected the bird in Nebraska in 1833) would have a valid claim to name the bird. Audubon kindly specifies that he has named the bird for the younger LeConte; if rightly I remember, the thrasher was named for his father. 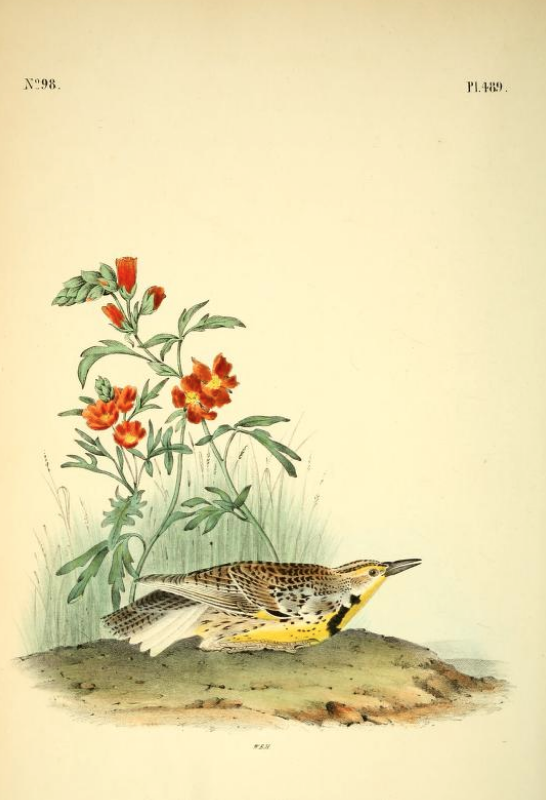 And speaking of unfortunate circumstances.

If most birders know anything about Audubon’s Missouri River expedition, it is the story of the western meadowlark. In its most frequently encountered version, it goes something like this: Audubon was the first to notice that the song of the meadowlarks in the west was different from that of his hometown birds, and he named the new species neglecta to tweak Lewis and Clark for having overlooked it.

That’s how I learned it, but it’s not true. Meriwether Lewis knew full well that the meadowlarks of the Missouri Valley were different, and had he been able to publish his natural historical discoveries before descending into mental illness, Lewis would certainly be the author of the species’ name. What’s more, Audubon knew full well that Lewis had known full well, and even quotes him to that effect. The disapproval he expresses in the tendentious name neglecta is directed not at the Corps of Discovery but at those who had followed Lewis and Clark up the river in the decades since, none of whom, Audubon says, had “taken the least notice of” the bird; it’s no real stretch to read the name as in fact a gentle tribute to Lewis, who had committed suicide in 1809.

There is much more to say about the Missouri River expedition undertaken by Audubon and his friends and companions. I’ll be saying some of it in a series of lectures this jubilee year; but that is no reason that you too can’t rummage around in the documents that survive from those long-ago months on the river. You may well notice something no one else has. 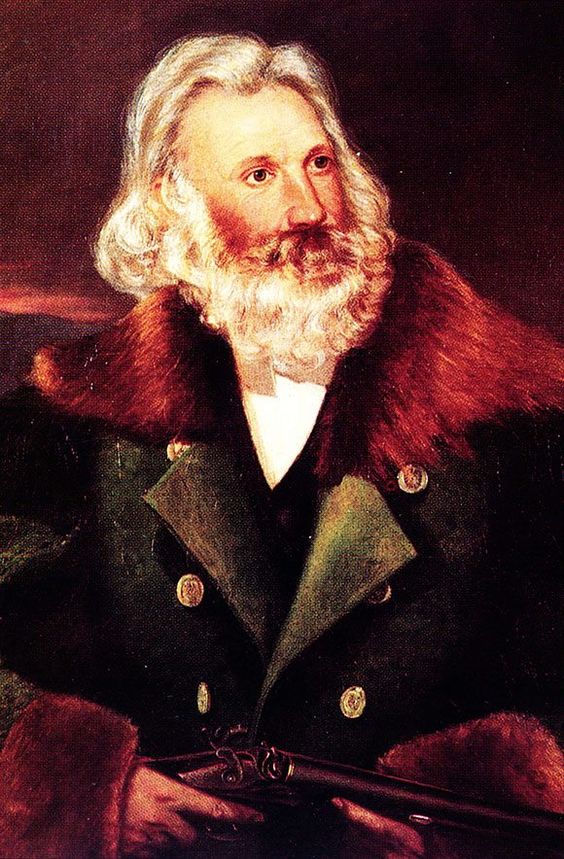