I’ll tell you why not.

Apparently there is a move afoot to recommend that the English name of Perisoreus canadensis be changed from the venerable “Gray Jay” to “Canada Jay.” It doesn’t really matter — names are just names, and English names have no taxonomic force in any event — but if the proposal is to be based on the information published in Ontario Birds a year ago, there are a couple of important corrections to be made before the AOS committee comes to a decision.

The essay in OB, “How the Canada Jay lost its name and why it matters,” is delightful and impressive, including an enormously helpful discussion of the debate leading up to the AOU’s adoption of English species names in the fifth edition of the Check-list. Unfortunately, this same essay begins with an assertion that is simply not true, namely, that “Canada Jay” was “the name [the AOU] had used for Perisoreus canadensis until 1910″ and the species’ “original official English name.”

A look at the pre-1910 editions of the Check-list, the first (1886) and the second (1895), reveals immediately that both used the English name “Canada Jay” to refer only to the nominate subspecies, not to the species as a whole. The typography and numbering in the first and the second editions serve poorly to distinguish species from subspecies, but the convention there in the case of polytypic species is to list the nominate subspecies first, without its redundant third element, and then to list the other subspecies as full trinomials. In no instance is any polytypic species assigned its own English name.

The rather illogical typographic system misled the author of the OB piece to claim, bizarrely, that the Check-list included “no nominate subspecies” of Perisoreus canadensis. In fact, the first entry, headed “Canada Jay,” refers only to the nominate subspecies, as the description of range makes plain: 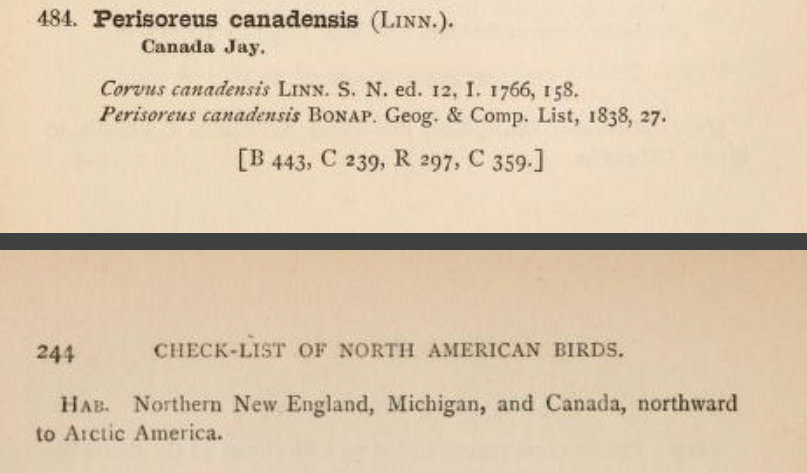 The graphic privilege given the nominate subspecies of polytypic species was, happily, abandoned beginning with the third edition of the Check-list, when all subspecies were assigned letters under a species-level header comprising only the scientific name. As in the previous editions, there are no English species names for polytypic species.

The same system was used for the fourth edition of 1931. Only in 1957 was a Check-list published with English names for species rather than just for subspecies.

None of these circumstances would be especially interesting — but for the fact that the author of the note in OB continually describes “Canada Jay” as “the original official English name” of Perisoreus canadensis “abandoned in 1957” “through error” and deserving of “restoration.” A weak argument to begin with (there is no such thing as lex prioritatis in English names), it falls apart entirely with recognition that the AOU never used “Canada Jay” to refer to anything but a subspecies of Perisoreus canadensis.

To its great credit, the AOU (now AOS) committee has been notably reluctant to change the English names of North American birds; in fact, as many have observed over the years, it is precisely the English names that have remained relatively stable as taxonomic discoveries have forced changes, and sometimes outright replacements, in scientific names.

There is no cogent and positive reason for the AOU to replace “Gray Jay,” the “official” English species name of Perisoreus canadensis. The name is not misleading — it denotes, after all, a jay that is gray — and it threatens confusion with no extralimital species. It avoids the geographic confusion created by so many English bird names. And it has been universally in use for more than sixty years.

All this, of course, is a tempest in a maple-flavored teacup: nothing is going to change. But it raises a very important matter, and in this at least, I agree fully with the author of the OB essay.

Scientific names have a scientific purpose: they are meant to indicate identity and relationship. English names, in contrast, are just for the convenience of those who can’t remember or pronounce such impossibly challenging labels as Junco or Vireo, and there is every reason to simply let them evolve as the community using them does. The notion that, as Dan Strickland writes, “the unelected foreign-dominated body” that is the AOS should direct its efforts to the legislation of English names is risible if you think about it.

So by all means, let’s call it the Canada jay, if that’s what pleases you and your birding friends. But let’s not do it because we believe, falsely, that that’s what the AOU always called it.