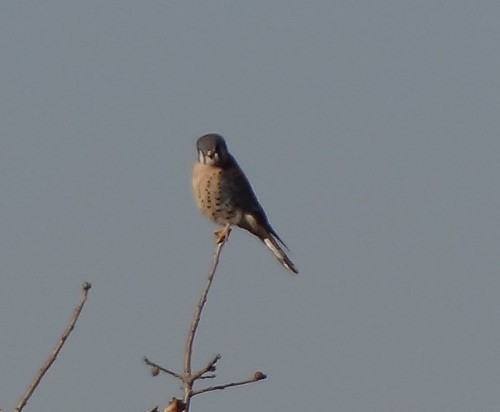 Winter is falcon season here in northern New Jersey, when our resident peregrines are joined by migrants of that same species, merlins, and American kestrels. For the most part, these fierce little bird-eaters manage to stay out of each other’s way. But not always.

Wednesday dawned dim and dull, and that was pretty much how I felt that morning while I sat in the Trader Joe’s parking lot waiting for something to be bought that should have been bought the day before. Things brightened considerably, though, when I saw a merlin powering in from the south; the bird paused briefly, then knocked a small passerine — a house finch or a house sparrow — out of the sky. Suddenly a peregrine appeared, probably a local bird from the Highway 3 bridge. Distracted, the merlin chased the bigger bird, which wheeled to defend itself. Wisely, and uncharacteristically, the merlin opted for the better part of falconid valor and sped off, while the peregrine turned a leisurely victory circle before sailing back towards the east. That little bit of feathered breakfast is probably still lying, uneaten, on the roof of the Ticktock Diner.

This morning’s show, though less dramatic, was far more puzzling. The monk parakeet nest at Mill Creek Marsh had a bird perched atop it when I arrived — not a parrot, though, but a little male American kestrel. As I watched, the kestrel fluttered down twice to briefly perch at what I assume were two separate entrances to the mass of sticks; apparently finding no one at home, or at least no one in reach of those tiny talons, he swooped back to the marsh and started to harry the much bigger female kestrel that may or may not wind up sharing the winter territory with him. When I checked again half an hour later, two parakeets were perched next to the nest — but not on it — and it wasn’t hard to imagine the green birds worrying just a little bit that there might be a feathered fury waiting for them inside.

Was the kestrel really hoping to snag a parakeet? (Hats off to his ambition if so.) Or was he simply exploring, perhaps having caught a mouse-like rustling from inside? Or did the chance of finding some warmth in that bushel of tightly packed twigs and branches exercise another appeal on a chilly fall morning?