“Bobolink” is a fine example of that rare thing in English-language ornithology: a genuine, honest-to-goodness folk name that managed to make its way into the bird books. Along the way, those three syllables have conquered “reed bird,” “rice bird,” “maize thief,” “conquedle,” “whiskodink,” “winterseble,” and who knows how many other alternative names, naive and sentimental, accrued over the centuries.

Surprisingly enough, the earliest written attestation of “bobolink” I’ve encountered is not found in a natural history context at all, but rather in a petulant diary entry composed by John Adams during an early session of the Continental Congress. In October 1774, the future president complained that he found that body’s “consultations very tedious,” and singled out for special criticism one of the South Carolina delegates:

Edward Rutledge, racist, slaveholder, and ditherer in the matter of independence, was no prize. But what did the poor bobolink ever do to be cast into such bad company?

It turns out that early America saw in the bobolink more than just another pretty feathered face. For at least some observers, the bird’s habits and plumages provided an allegory of human life—an allegory most decidedly in malam partem.

Washington Irving preserves the clearest view into this sinister reading of what seems to us a harmless and attractive bird. In Knickerbocker’s History, Irving makes an offhand mention of “the luxurious little bobolink,” a phrase that seems innocuous, even complimentary, until we remember that “luxurious” retained well into the nineteenth century the meaning of “given to self-indulgence.” That is no praise.

And neither is Irving’s description of the bird as a “little feathered voluptuary.” As a boy, Irving writes, he admired and envied the bobolink for its freedom:

No lessons, no tasks, no hateful school; nothing but holiday, frolic, green fields, and fine weather.

But watching the bird over the years, Irving discovered that

he gradually gives up his elegant tastes and habits, doffs his poetical and professional suit of black, assumes a russet or rather dusty garb, and enters into the gross enjoyments of common, vulgar birds. He becomes a bon vivant, a mere gourmand, thinking of nothing but good cheer, and gormandizing on the seeds of the long grasses on which he lately swung…. He grows corpulent with good feeding…. Last stage of his career, we hear of him spitted by dozens, and served up on the table of the gourmand, the most vaunted of southern dainties.

Just in case the message is not clear, Irving lays out a moral, “worthy the attention of all little birds and little boys,”

warning them to keep to those refined and intellectual pursuits, which raised him to so high a pitch of popularity, during the early part of his career; and to eschew all tendency to that gross and dissipated indulgence, which brought this mistaken little bird to an untimely end.

Irving’s nephew Pierre, commenting on his famous uncle’s work, was even more blunt: the bobolink, like the voluptuous scholar, “degenerates into a fat epicure,” and richly deserves his fate when he “is shot for the table.”

William Cullen Bryant’s famous spinking, spanking bobolink takes on a somewhat darker significance if we read that poem against this background. Robert o’Lincoln is a braggart, the very prince of braggarts, who “frolics about” while his pious wife patiently incubates their eggs.

Family life, he fears, “is likely to be/ hard for a gay young fellow like me.” When the “six wide mouths” appear, he grows “sober with work and silent with care.” He sets aside his fine plumage and his taste for “fun and frolic,” transforming into a “humdrum crone” before flying off for the winter.

For Bryant, as for Irving, the bobolink stands for the singer — the poet — who abandons his true calling for something less, something merely worldly, molting out of his wedding-suited bravado into fatal concern with the luxuries of the flesh. “Come back again,” Bryant’s lyrical voice cries, “when you can pipe that merry old strain,” when the bird can set aside once more what Irving called the gross enjoyments of everyday life.

Today, the bobolink no longer carries its burden of moral signification. We read — or we once read, I suppose — Bryant’s poem as merely an imagined conversation with a cute bird in a field. But a century and a half ago, this species meant something to Americans and the literary lights of the day. 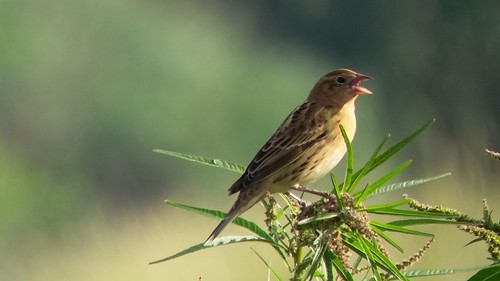