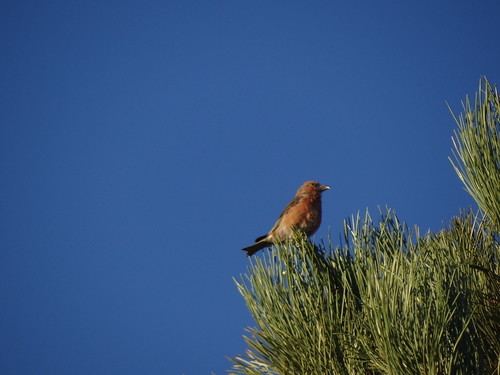 In North America, crossbills are “birder’s birds,” entirely unknown to the unbinoculared among us.

Things are different in the Old World, where over the centuries the birds with the sanguine plumage and twisted beaks have accumulated a heavy burden of legend and lore. Thanks to etiological myth, the crossbill of Europe is still a bird of good luck and good health, owing the bright plumage and bizarre bill shape to its intervention in Christ’s Passion.

Held in captivity, a crossbill was believed to cure disease, avert lightning, and forecast a household’s financial future — superstitions that apparently held on well into the twentieth century in rural regions of the continent.

What I did not know (maybe you did) is that these magical properties once made the crossbill a hot commodity. At the turn of the twentieth century, the Erlangen physician, ornithologist, and Volksforscher Josef Gengler reported having seen “a great number” of these birds “piled up” in the house of a Thuringian birdcatcher, awaiting shipment to dealers in the city.

In 1893, not far from the Silesian city now known as G?ucho?azy, Paul Robert Kollibay discovered that the local weavers supplemented their income with an “extensive” campaign to capture and sell crossbills:

In the middle of the village, in front of every house, a caged decoy called out to the masses of wild crossbills in the nearby forest; limed wands were attached to long poles, and the birds striking them as they flew in were taken effortlessly by the birdcatchers sitting there at their work.

Prominent among the purchasers of these unlucky luck birds were the nursing staff of German hospitals, where the birds were used as therapy for patients with gout and other illnesses. It was very important, though, to select not just any crossbill: those whose upper mandibles cross to the right cure the ills of men, those whose bills cross to the left are more effective for female complaints.

Not sure why, but I just have this feeling that that might not be invariably the case. True or not, though, this and other stories make seeing these nifty little birds even more exciting — think about them when you hear a kip kip from the pines above your head, or maybe the next time your gout starts to act up.