It seems that the Terror has been found in the icy waters off King William Island, and poor John Franklin is in the news yet again.

This time, the discovery coincides with the peak southward movement of one of the birds named for Franklin, the graceful, squeaky-voiced gull still widely known in my youth as the prairie pigeon. 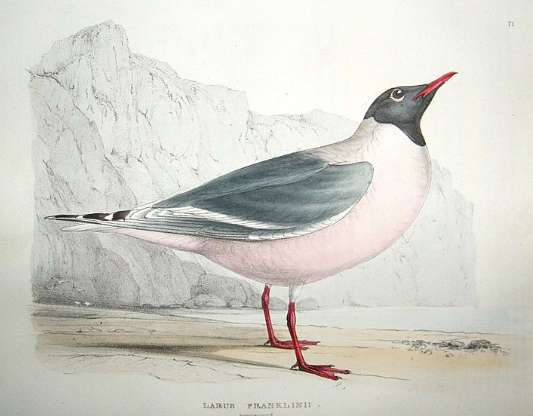 John Richardson named the species for Franklin in February 1832. In his detailed description, he directs the reader to the account of the same bird in Joseph Sabine’s “Zoological Appendix,” published two years earlier, in which Sabine unfortunately treated the bird Franklin had sent home to England as identical to Alexander Wilson’s (and Linnaeus’s) laughing gull — with the notable exception that Wilson’s “figure represents the primaries as entirely black.”

Richardson, of course, was right to distinguish the two, but he was wrong, alas, to believe that he was the first to describe the species as new. Less than a year earlier, in May 1831, Johann Georg Wagler had unpacked a box of specimens sent from Mexico by the Bavarian collector Keerl, and in it recognized a gull first described in the late sixteenth century by Francisco Hernandez de Toledo, who wrote from Mexico that

this bird of the genus of gulls or diving birds is not at all unlike the gray species depicted by a recent author, in both size and color; but it has both crown and bill black, the latter rather curved and reddish at the very tip. The legs are black tending to deep red, the tail gray above, and the outer portions of the wing are in part white and in part black, with small bright white spots at intervals. It dwells around lakes and rivers, and eats small fish and insects. It is not a resident bird here and does not raise its young in Mexican waters. It is edible, but not well suited as food. It is aquatic and noisy, and gnaws on bones and eats whatever it encounters.

Wagler’s unflattering scientific epithet for the bird comes from Hernandez, who recorded that the Aztecs called it “pipixcan,” or “the thieving bird.”

It took close to a hundred years for Wagler’s priority to be recognized by English-speaking ornithology, and by the time pipixcan was officially restored as the gull’s scientific name, the vernacular name commemorating Franklin had been long and firmly established.

For observers lucky enough to be watching the great flocks move south these coming weeks, the name Franklin’s gull is a reminder of an explorer whose final fate is still imperfectly known — but whose spirit floats over every autumn on its way from one hemisphere to the next.