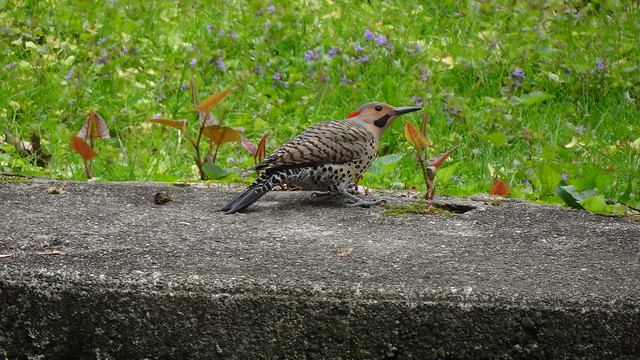 Well, it can’t. It’s a bird. But I’m continually amazed by what the human mind can do with — can do to — the things around us.

It’s been a summer of symbols in the United States, and while the removal of even the most vile of signifiers can’t destroy their signifieds, at least we’ve finally agreed that governments have no business propping up evil by displaying its tokens.

Now comes this, just the latest bit of officially sanctioned racist intimidation to hit the e-waves. 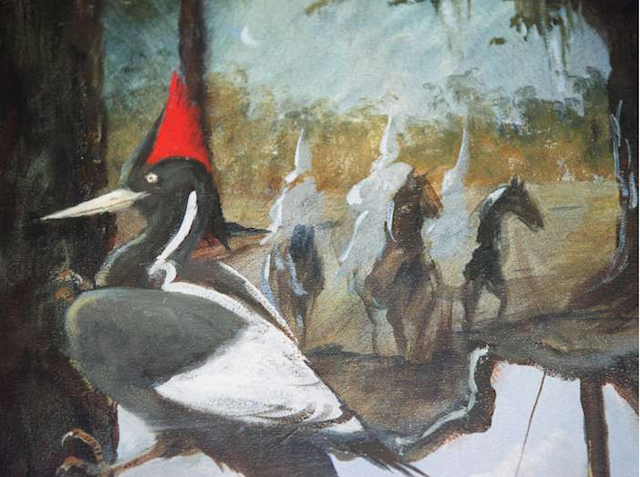 It’s ludicrous that there’s debate at all about the three white-sheeted thugs riding mock-heroic beneath a moonlit sky. Scrape ’em off, paint ’em over.

But what about that other wistful reminder of a golden past, the big black and white bird with the red crest in the foreground? It turns out, google informs us, that woodpeckers lead a sinister symbolic life in the violent underworld of American racism. Dina Temple-Raston’s Death in Texas describes the “body art” of one scion of the local aristocracy:

His arms and back were a solid gallery of tattoos and racist symbols. A menacing version of Woody Woodpecker sported a Klan robe on one arm and a tiny black man dangled from a tree limb on the other.

I advise forgoing an image search.

The internet abounds with explanations of the semiotic link between picids and racist hatred, but no one seems to have noticed the obvious: that it all began with the action of one recalcitrant state legislature.

On September 26, 1927, Bibb Graves, the governor of Alabama and “Exalted Cyclops” of the KKK, signed the law declaring the yellowhammer that state’s official bird. Not, note well, the “flicker,” which was the bird’s AOU name at the time, but the yellowhammer.

Why that species, and why that name?

Most state birds were selected for the beauty of their plumage or the charm of their song; a few owe the distinction to crass economic thinking (Rhode Island! Alaska! South Dakota!!). Only two were chosen on historical grounds: Delaware’s chicken, and Alabama’s big brown woodpecker.

No need for me to craft a tendentious paraphrase. Here’s what the Alabama Department of Archives and History itself has to say about it:

Alabama’s bird is a pretty bird, with a distinctive voice and habits. But all that mattered in its selection was the chance to commemorate the men of that state who fought to destroy the Union and prop up the enslavement of one human by another. It’s no wonder that woodpeckers have become the secret handshake of people who believe, truly believe, that their lives would be better if we could only return to the days when ivory-billed woodpeckers still flashed through the woods of the south.

[RW: I don’t know whether my 3x-great-grandfather met with any Alabamans, but this is what their war did to him, when as a member of Co. F, 17th Iowa Infantry, he

participated in the battles of Pittsburg Landing and Shiloh, and took part in the many engagements which led to the evacuation of Corinth and Iuka. At the camp at Clear Creek our subject was attacked with the intermittent fever. He was removed to St. Louis, Mo., and placed in the Good Samaritan Hospital, remaining there for some time, and was finally honorably discharged on account of physical disability. At the time of his discharge he was so reduced in flesh that he was merely a skeleton, with an epidermis stretched over it. He rejoined his people in Nebraska [after] endur[ing] without a complaint the terrible experiences had on the fields of Shiloh, Pittsburg Landing and Iuka. Returning home he suffered for years, broken in health, but not in courage or spirit.]