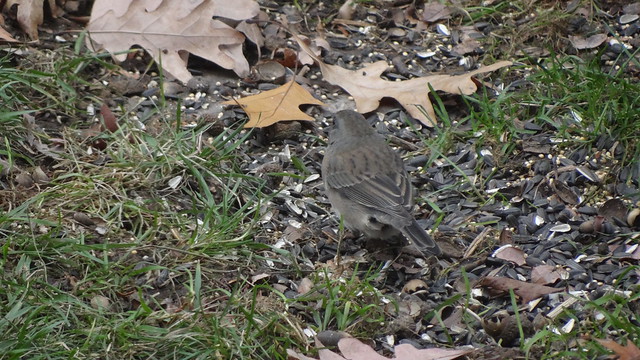 A cool day in late November — especially a cool day in late November with cold and big snows predicted for the next day — is perfect for spending a little time with the backyard sparrows. The roster Tuesday morning was pretty much what was expected in northern New Jersey: lots of slate-colored juncos and white-throated sparrows, with the odd chipping, song, and fox sparrow to liven things up.

One bird, this bird, stood out in the feeder flock. 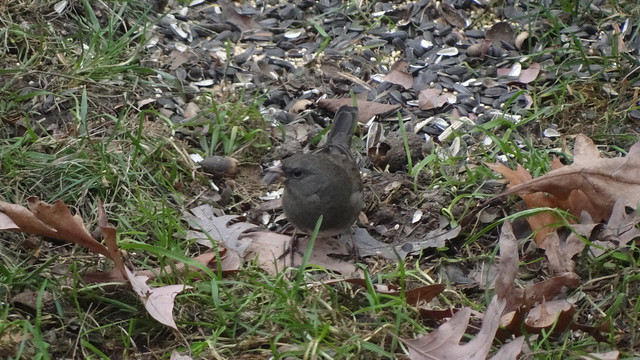 It was more than superficially junco-like, with a dull gray hood, white belly, and pink bill, but the pattern and color of the underparts were off. The dull olive-tan of the breast sides and flanks seemed wrong for not just for a slate-colored but for any junco, and the color reached quite far in towards the vent in a wide band, almost isolating the white undertail coverts. At some angles, the bird seemed to show a “color corner” between the hood and the breast sides, but at others just the usual smudgy blend shown by brown, immature or female, slate-colored juncos. Some of the rear flank feathers seemed to have very fine, just barely visible dark shaft streaks. 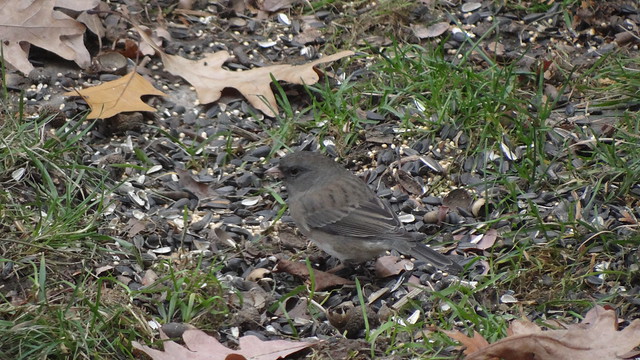 A closer look revealed a couple of other oddities. The ground color of the back seemed unexceptional, but its neat pattern of prominent but fine black streaks was worth a second look. 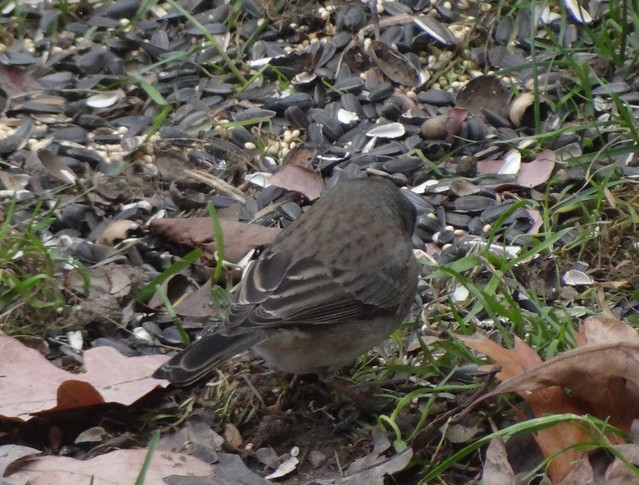 A bit of faint, diffuse streaking isn’t all that unusual in brown juncos this time of year, but these markings — darker in life than in the photos I took through my dirty window — struck me as beyond the pale. 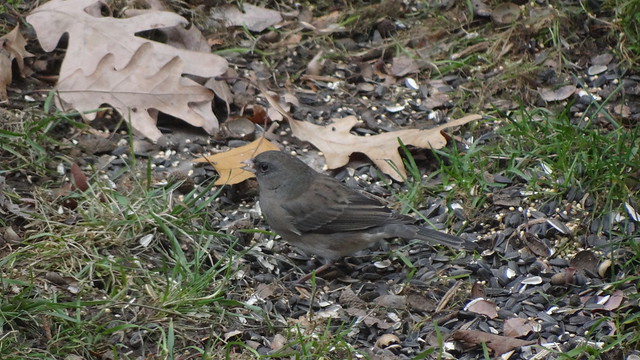 I have no good, tightly-focused images of the wing pattern, but the one above at least gives a hint of the inconspicuous dotted wing bars; the tips of the median coverts weren’t always even this visible, but several of the greaters on each wing showed very small white triangular tips, creating a short, jagged “droplet” wing bar on the gray wing.

The bird’s tertials seemed more or less normal, with the typical broad buffy edgings of brown slate-colored juncos, if perhaps just a little more white towards the tip of the outer web than most.

While the other juncos were setting off their feathered flash bulbs all around the yard, this bird kept its tail resolutely folded. Though I could never contort myself into a position from which I could see the underside of the tail, I eventually had several reasonable if brief looks at the bird in flight, when it showed no white in the outer rectrices. Given my split-second view of the bird as it dashed into the arborvitae, I’d be hard pressed to prove that it actually even had all of its rectrices, but the ones I could see were dark.

With the growing suspicion that this might be a bird of mixed ancestry (put that way, which bird is not?), I worked hard to imagine the shadow of a face or throat pattern. The hood seemed unremarkably gray, with some dull rusty shading and streaking at some angles. There was an occasionally noticeable paler patch on each side of the neck beneath the auriculars, a feature shown by many brown slate-colored juncos.

The strangest thing about the bird’s head plumage was the area around the eye. The lore was decidedly blacker than the rest of the already dark head, no big deal in a slate-colored junco, but that color continued back to surround the eye and to end in an odd broad point behind it.

The bird was minutely larger than some of the other juncos in the flock, but still obviously much smaller than the white-throated sparrows.

If this is not just an even weirder than usual junco, what might it be? There are numerous records and reports of apparent hybrids between slate-colored juncos and white-throated sparrows, among them the winter birds well photographed and well described by Mark Szantyr a few years ago in Connecticut.

Nearly all of the documented individuals assigned to this hybrid combination are obviously, conspicuously intermediate in appearance, combining a white throat and lore with a gray breast and head. Some are more subtly marked, such as the one photographed by Szantyr and almost entirely junco-like but for a single brown, white-tipped greater covert. And surely others, perhaps the majority of them, are even more cryptically clad, indiscernible to humans and maybe even to their flock mates.

If in fact this odd sparrow was a hybrid or introgressant, I’m not sure we can tell with any real certainty which species might be lurking in its family tree. To my eye, the very fine back pattern and incomplete vent strap immediately suggested not a Zonotrichia but rather a Lincoln’s sparrow, but we will probably never know.

We’ll probably never know. But it’s always fun to look close; if it weren’t, we wouldn’t bother looking at all.