The find of the fall — so far — at Cape May has been the continental US’s third whiskered tern, discovered a couple of days ago and still showing nicely, I hear. I’ve got fingers, toes, and eyes crossed that it linger until next Monday, when my group will be there with hopeful bells on.

In all the excitement, there’s inevitably been some shooting from the hip about this bird’s name, Chlidonias hybrida, and we’ve been reminded more than once now over these past days that the species owes that funny epithet to the quaint belief that these birds actually were hybrids.

But that’s not true. Though there are plenty of cases in which “good” species were originally mistaken for the products of miscegenation, this isn’t one of them.

Peter Simon Pallas observed this “extremely rare bird” a few times in the course of his expedition to central and eastern Russia, and almost 40 years later, he gave it its first formal scientific description in the Zoographia Rosso-asiatica. He named it Sterna hybrida, not because he or anyone else had thought it was a hybrid, but because its appearance combined features of the “white” and of the “black” terns.

You might say that it was born of the black and the common tern.

Of course, Pallas was not the first to see this widespread tern. He himself indicates that it had perhaps already been described and depicted — in neither case very well — in Luigi Ferdinando Marsigli’s pre-Linnaean Danubius pannonico-mysicus, where the bird is said to differ from the black tern in its reddish bill and feet.

The account of the plumage here more closely recalls, if anything, a molting black or white-winged tern; indeed, Brisson would later use Marsigli’s description as the basis for his own “patchy tern,” Sterna naevia, which, if memory serves, Bonaparte eventually identified as a black tern.

The sorting out of the marsh terns and their names took some time; as late as Coues’s “Review of the Terns of North America,” there still obtained “a state of great confusion,” and even more than a dozen years later, Taczanowski could mix up the names of the whiskered and the white-winged terns. We were well into the twentieth century before any sort of stability could be declared.

But never did we really believe that any of them were hybrids. 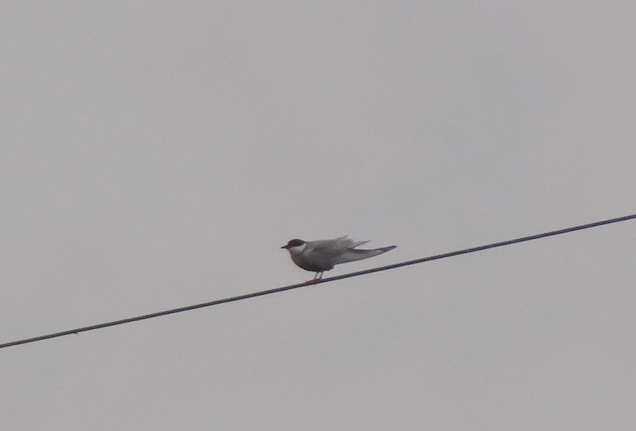 And why is it hybrida? We’re told that this is a noun “in apposition” and not an adjective. Hmph.