With the recent apparent rediscovery in Ontario of the Townsend’s bunting, John James Audubon’s “nonce species” are back in the news. When pressed, most birders can name the bunting, the small-headed flycatcher, and the two warblers; but the fifth –and the most visually appealing — of the Audubonian mysteries for some reason gets no respect. 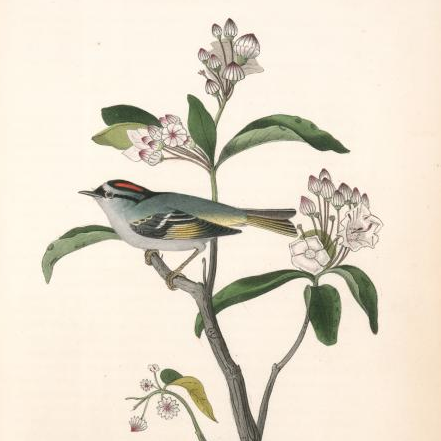 Audubon collected a male of “this pretty and rare species” in Pennsylvania in the early summer of 1812. Nineteen years later, when he published the first volume of the Ornithological Biography, he had never seen another, and was unable

to learn that this species has been observed by any other individual.

In fact, however, Cuvier’s kinglet (named, over Charles Bonaparte’s recommendation, for “one at present unrivalled in the knowledge of general Zoology”) did enjoy — unlike Audubon’s other unica —  a modest afterlife in the nineteenth century.

In both editions of the Manual, for example, Thomas Nuttall proclaimed himself thoroughly convinced of the legitimacy of “this … interesting addition to the North American Fauna,” than which

no species can be better marked or more strikingly distinguished.

Audubon himself seems never to have given up hope. In 1840, he corresponded with Spencer Fullerton Baird about a “singular variety” of the ruby-crowned kinglet the seventeen-year-old Baird had shot that spring:

Have you compared the Regulus with the description of Regulus Cuvieri? Could you not send me your bird to look at?

So far as I know, Baird never replied, but the Nestor of American ornithology was still more or less in the camp of the believers nearly twenty years later (and seven years after Audubon’s death), when he included the Cuvier’s golden crest in his 1858 report on the birds of the railroad surveys:

I have introduced the diagnosis of this species from Audubon for the sake of calling attention to it and of completing the account of the genus.

There was still no second record of the species (or, as the author rather pointedly recalls, “of several other species not found in the United States by any one else” but Audubon), and Baird’s uncertainty would be noticeably greater in the History of 1874:

This species continues to be unknown, except from the description of Mr. Audubon….

Elliott Coues did not even number the species in his 1872 Key, observing in a note only that the bird was “not now known.” The final edition of the Key has nothing to add: R. cuvieri

Not unknown to everyone, though.

Writing the year before publication of Coues’s first Key, the Canadian physician, birder, and all-around kook Alexander Milton Ross offered no indication that the “Cuvier’s golden-crested wren” was in any way remarkable. In Canada, he says,

this wren usually accompanies the two preceeding species [namely, the golden-crowned and ruby-crowned kinglets], in their spring and fall migrations.

Ross’s were the last “sightings” of this distinctive bird, one that the American Ornithologists’ Union has from the very start relegated to the Check-list‘s appendix of “hypothetical” species. Today, Audubon’s mystery kinglet is thought to be most likely “an aberrant plumage” of the golden-crowned kinglet, but who knows? Maybe the lost specimen from Fatland Ford really was something, and the rest of us — pace Alexander Milton Ross — just haven’t been looking hard enough.

Let me know the next time you run into a kinglet with a black forehead. It just might be history in the re-making.