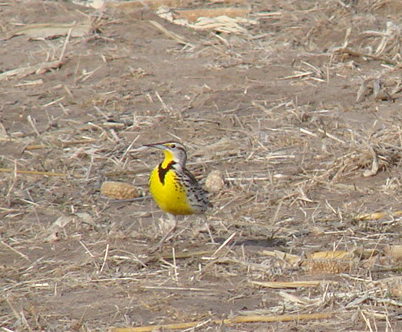 On June 22, 1805, Meriwether Lewis wrote in his journal that

there is a kind of larke here that much resembles the bird called the oldfield lark with a yellow brest and a black spot on the croop.

Lewis and the expedition’s crew knew the eastern meadowlark, “the oldfield lark,” and he observed that these western birds uttered a “note [that] differs considerably” from that familiar bird from back home. But

in size, action, and colours there is no perceptable difference; or at least none that strikes my eye.

And that was that. Lewis and Clark had in fact discovered a new species, the western meadowlark, but apparently thinking it just a variant of the well-known eastern bird, they preserved no specimens and prepared no formal description.

What happened next is well known. In May 1843, John G. Bell, the taxidermist on Audubon’s Missouri River journey, became aware of some

curious notes, without which [the meadowlarks above Fort Croghan, Dakota] in all probability … would have been mistaken for our common species.

On collecting a series of these “quite abundant” birds and comparing them to New York skins of the eastern meadowlark, Audubon — in contrast to Lewis, four decades earlier — determined that

the differences are quite sufficient to warrant me to describe the [western birds] as a new and hitherto undescribed species, 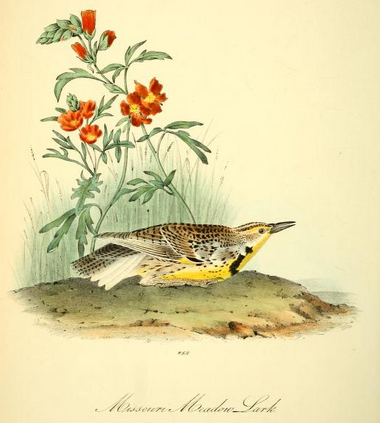 That epithet, neglecta, is sometimes taken as another in Audubon’s collection of snide sideswipes at his colleagues and predecessors, but in this case, it is simply a statement of fact. And Audubon frankly includes himself among those naturalists who had overlooked the difference.

When I first saw them, they were among a number of Yellow-headed Troupials [yellow-headed blackbirds], and their notes so much resembled the cries of these birds, that I took them for the notes of the Troupial, and paid no farther attention to them.

Today is the day to be grateful that he and his colleagues eventually did pay attention.