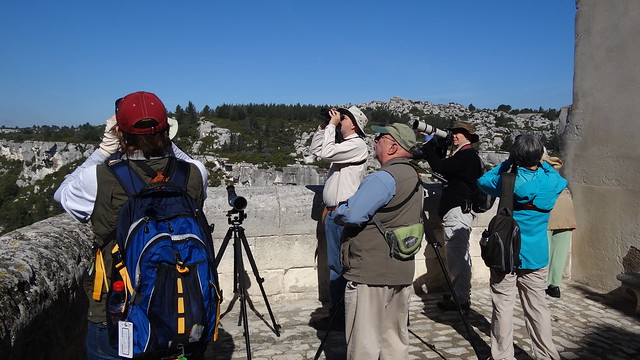 As if there weren’t already reason enough to bird Les Baux, the romantic ruined fortress is one of those magical places where you can get spectacularly close looks at mountain birds without going up into the mountains. On our visit yesterday, we admired Blue Rock Thrushes, Eurasian Crag Martins, and my favorites, the dashing Alpine Swifts skimming through the air just a few feet away from where we stood, breath held.

As it turns out, visiting birders aren’t the only ones to have noticed the speed and strength and skill of this largest of the Old World swifts. Crespon tells us that the “martinet à ventre blanc” (a dull name if ever there was one!) is known locally in Provence as the “grand balustrié.” Azaïs explains in his Dictionnaire des idiomes romans du midi de la France:

One gives this name to the Alpine swift because of the shape of its spread wings, which resemble an archer’s bow.

It’s a lovely metaphor, not least because the swift gets to play two roles simultaneously: it is both the bow drawn back and the arrow released, flying faster than any man-made dart ever could.