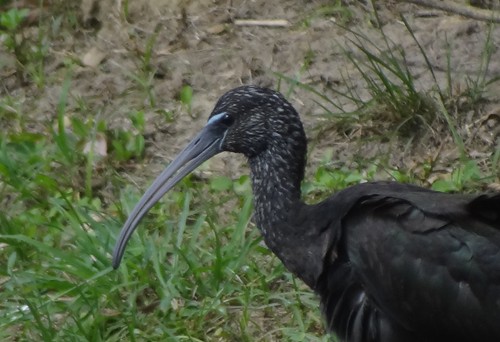 Famously, the Glossy Ibis (here represented by the photo of a bird on Tobago last fall) is spreading like wildfire in Mediterranean France; our counts these past few days have fallen, conservatively, between 60 and 100 each day, a far cry from the times — not that long ago — when a single individual would make the list of an excursion’s “good birds.” By 2012, the breeding population of the Camargue exceeded 350 pairs, and the bird, dramatic and beautiful, no longer strikes anyone as especially noteworthy here in southern Provence.

Though this species was a rarity through much of the twentieth century, Crespon, a hundred seventy-five years ago, knew it as a regular spring migrant in the Camargue:

This charming bird only migrates through those of our marshy landscapes that are closest to the Mediterranean; in the early days of May, it arrives in more or less large flocks.

It’s tempting to think of those nineteenth-century passage birds as would-be pioneers, and equally tempting to find a hint at the reasons for their failure in Crespon’s words:

Their flesh is hard and leathery, and tastes extremely bad; it has an odor of sardines.

Nobody’s eating them today, and these exotic beauties are free now to continue their conquest of the world, one marsh and one rice paddy at a time.