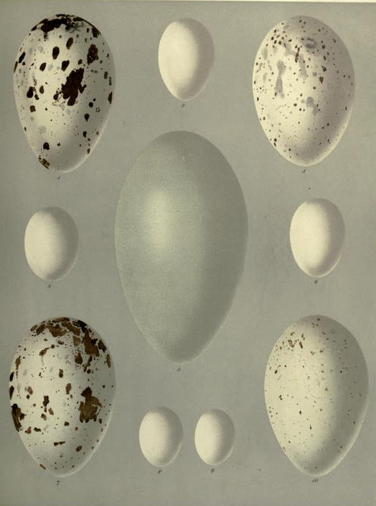 It was one of the polite fictions of the waning days of American oology that specimens were never sold but “exchanged,” traded by collectors who were guided not by anything as crass as prices but rather by “exchange values,” regularly updated in the oological journals and other trade publications.

Thus, for example, in 1914, Charles Reed ranked the eggshells of the Ruddy Duck and those of the White-tipped Dove of equivalent value and desirability, assigning an exchange price of 35 cents to each; one laid by an American Crow or an American Goldfinch was worth a cool nickel, and an even hundred of those common specimens could theoretically be traded for the five-dollar egg of an Olive Warbler or a White-winged Crossbill.

The really extravagant price tags — I mean “exchange values,” of course — dangled from boxes containing the eggs of globally rare or extinct species. The eager collector needed to have a ten-dollar bill in his pocket if he thirsted after the egg of a Snail Kite or a Carolina Parakeet or an Ivory-billed Woodpecker, and only the truly wealthy could afford to add the California Condor to their cabinets at a hundred dollars a pop.

The egg of the Passenger Pigeon, the last female of which died the same year in which Reed published his list, was far more attainable. At two dollars, such an egg wasn’t exactly cheap, but it was no more expensive than those of such common, if inconveniently accessible, species as the Glaucous-winged Gull and Orange-crowned Warbler. A lot of pigeon eggs must have been collected back in the days of their abundance, when, as Schorger reports, a single tree could support up to three hundred nests. 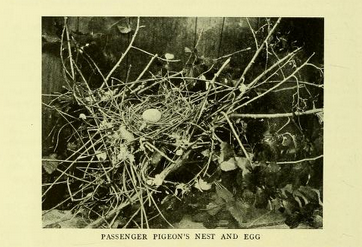 Just a few years later, it was obvious that the pigeons weren’t coming back. The American Oologists’ Exchange Price List of 1922 set the value of a single Passenger Pigeon egg at $100, twice that of the Heath Hen and five times that of the Dusky Seaside Sparrow. Scarcity drives even the most arcane of markets.

I have no doubt that there are still good numbers of pigeon eggs resting on cotton in long-forgotten drawers, and I suspect that the price wouldn’t be that terribly high if you wanted one. Me, though, I’d be content with this as the easiest way to remember that not much more than a century ago, the life force still ran through a bird we’ll never seen again: 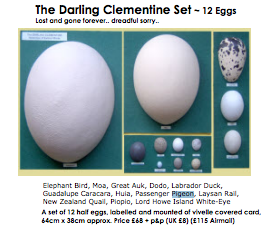