One of the few things I can still enjoy about winter in the snow zone is the chance to spend some time with one of my (fifty or sixty or so) favorite emberizids, the American Tree Sparrow.

There’s a game I like to play when I’m watching this or any other “familiar” bird: How, I ask myself, can this bird be identified without recourse to any of the old Petersonian “field marks”?

After all, once you’ve seen your first hundred or thousand or (probably, though I don’t have an exact count) ten thousand tree sparrows, you don’t really look at the rusty crown or the smudgy breast spot or the swollen, yellow-based mandible.

Those are all “micro” marks, often hard to pick out without the application of glass. And yet we know what we’re looking at even before we’ve switched off the car. So what are we actually seeing — and can we make our impressions explicit, in real live honest-to-goodness words? 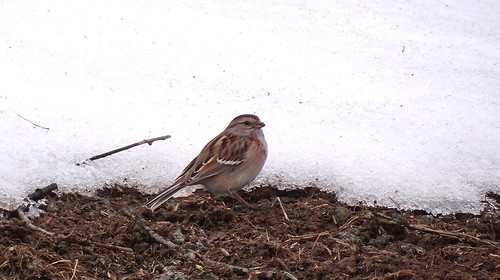 Well, there’s the rather long, black tail with conspicuous white edging, for one thing. There’s the coarse back pattern of rufous and black tracks, so unlike the neater, finer markings of this species’ (current) congeners. And there’s that big reddish secondary panel that contrasts so strikingly with the most beautifully black and white tertials worn by any American sparrow.

But most of the time it’s that single bright white wing bar that catches my eye. And every time it does, I smile. What I learned as a young birder was that

in the words of what still ranks as one of the very best field guides ever.

Indeed, American Tree Sparrows do have very large, very conspicuous white tips to both the greater and the median secondary coverts.

But just because a bird “has” two wing bars doesn’t mean it “has” two wing bars. More often, I think, than most sparrows, birds of this species tend — at least in the winter — to droop their scapulars and fluff their breast feathers, often covering the median coverts, and thus the “upper” wing bar, entirely, creating the effect of a single bold white slash across a rich chestnut field. 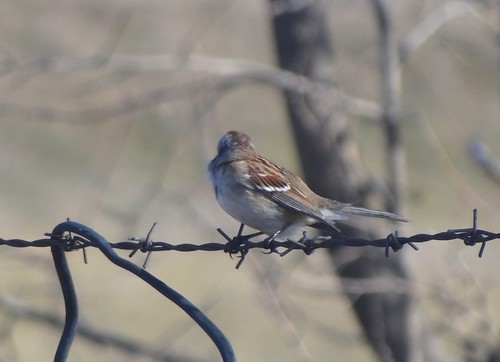 Even when the second, upper wing bar is visible, it tends to appear incomplete; in two hours of sparrowing the other day, I had sustained looks at a bird revealing both wing bars in their full glory exactly once.

None of this is exactly earthshaking, I suppose, and I’ll admit that I still take every opportunity I can to enjoy the classic, oft-repeated identification characters of this charming species. But my birding is invariably enriched when I stop to ask not “What is it?” but rather “How do we know?”

Maybe yours would be, too.