I really shouldn’t have to stand up — again– for the Father of American Ornithology, but Alexander Wilson had the ill grace to die 201 years ago, so somebody’s got to step in and defend his probity from these vicious attacks. 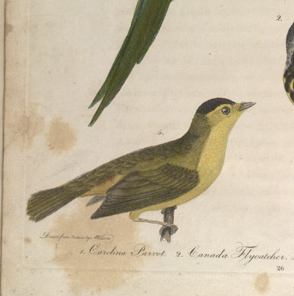 Here is that grossest of calumnies, again, in an otherwise fine book published this past year: the Wilson’s Warbler was, I read,

first collected and named (for himself) by Alexander Wilson.

It is true that Wilson was the discoverer of this warbler, a “neat and active little species … never met with in the works of any European naturalist.” But he did not, not ever, name this or any other bird “for himself.”

Wilson called his bird, deposited in Peale’s Museum under the catalogue number 7785, the “Green Black-capt Flycatcher,” and assigned it the latinizing binomial Muscicapa pusilla, in recognition of its small size.

Muscicapa, of course, was one of the catch-all categories of those days, like Motacilla and Falco. When Charles Bonaparte set out to revise the genera of North America’s birds in 1828 — fifteen years after Wilson had shuffled off his mortal coil — the princely ornithologist reassigned the little “flycatcher” to the warbler genus Sylvia, and changed its species epithet to wilsonii, in honor of his great predecessor.

A decade later, Bonaparte further subdivided the warblers, erecting the new genus Wilsonia and restoring (as was only proper) Wilson’s original species name pusilla to the small black-capped bird.

And so it was Charles Bonaparte who named the warbler for Wilson, first by using the (invalid) epithet wilsonii and then by creating the genus name Wilsonia. In his Ornithological Biography, Audubon was still calling the bird the Green Black-capped Flycatcher in English, but by the time he compiled his own Synopsis in 1839 — a much-needed index to the plates of the Birds of America — he had come ’round to refer to it as Wilson’s Flycatching Warbler, the English name it still bears, with a slight simplification, today. 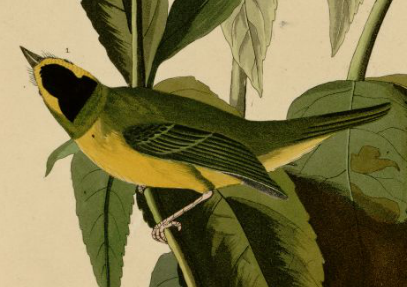 So why, oh why do people otherwise of normal intelligence insist on accusing Wilson of the supremest of ornithological vanities?

It’s because they’ve never learned to read a scientific name.

Until recently, the name of the bird we call in English the Wilson’s Warbler was this:

The name in parentheses is the original author of the scientific name — but those parentheses, crucially, are the conventional indication that the genus name has been changed since the species was first described (and in this case, changed several times).

A sloppy or lazy or ignorant reader of might, just might, sloppily or lazily or ignorantly come to believe that our poor parenthetical friend was responsible for every nomenclatural element there, where in reality only that meek little pusilla remains from Wilson’s original name.

A plea to follow my rant: Next time you decide to repeat a twice-told tale, especially one with a faint whiff of the libelous about it, think. Just think.