Christmas of 1897 found a new and exciting book under many a young birder’s tree. 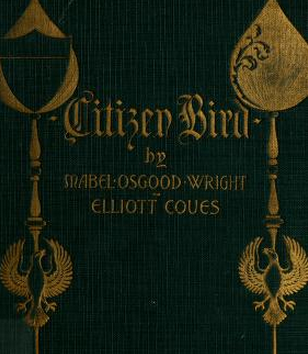 Citizen Bird was the latest offering from Mabel Osgood Wright, one of the turn of that century’s most important authors of bird books for children and novices. Written, as its subtitle promises, “in plain English for beginners,” Citizen Bird was a collaboration between Wright, Elliott Coues, and Louis Agassiz Fuertes — a high-powered team if ever there was one. The book’s conceit is simple and straightforward: the Doctor, obviously Coues’s fictional alter-ego, takes his young daughter and her two cousins, along with the neighbor boy Rap, on a series of pastoral walks and leisurely carriage rides across Orchard Farm, where they encounter the wild birds and fall into conversation with Mammy Bun, a retired nurse, and Olaf, a fisherman.

Poor Rap always plays the bumpkin. One evening, when the party stops to admire a rural sunset,

a large bird that had been sailing about overhead dropped through the air till it was almost over the surrey, then turned suddenly and darted upward again…. “That’s a Nighthawk … he’s looking for small birds to eat,” [said] Rap.

The kindly Doctor corrects him, of course:

“his broad, shallow mouth is only suitable for insect-eating … and the beak is equally small and feeble, not at all like the strong hooked one of a cannibal bird.”

Interestingly, the Doctor characterizes the nighthawk as “belonging to the Ground Gleaners as well as Sky Sweepers.” Fuertes’s dramatic illustration of this “valuable Citizen” shows him engaged in the first activity: 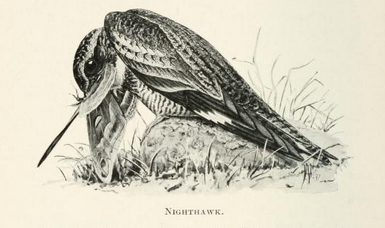 I can’t recall ever having seen a Common Nighthawk tussling with even the largest insect on the ground, but apparently it happens, and not just at Orchard Farm.