It’s almost Thanksgiving, and time once again to trot out the old and long discredited chestnut about Benjamin Franklin and the Wild Turkey. That one’s been debunked enough by now, I think. But what about the other bird in the Franklin story, the one that actually became our national feathered symbol? Franklinian irony aside, the Bald Eagle was a really good choice: big, powerful, “majestic.” And in the eighteenth century, the species was sufficiently widespread and sufficiently abundant that you could often as not just go outside, look up, and be reminded that you were a citizen (well, so long as you were white and male and owned property) of a country that aspired to some of those same slightly dubious qualities.

Admittedly, that name is a little awkward. But as generations of gullible American birders have been told (thanks, National Geographic!),

Hm. Hm hm hm. Shall we try to think this one through?

First, there is no such Old English word as “balde.” Second, the Middle English “balled” means not “white” but “marked with white on the forehead,” an excellent fit for, say the Eurasian Coot, but a bit strange for our eagle. But why are we getting bogged down in philologicalities anyway? I find it very hard to imagine that the seventeenth-century ornithologists and explorers who coined the name “Bald Eagle” — a New World species unknown, of course, during the Old English and Middle English periods — would have sought out an English epithet that was already then obscure, oblique, and obsolete.

What I can or can’t imagine, of course, doesn’t matter nearly so much as what the early natural historians themselves had to say about the name. And not one of them — not one — makes so much as an allusion to any “Old English” word meaning white.

One of the earliest accounts of the birdlife of the English colonies in North America is that in a letter from the Virginia planter John Clayton to the Royal Society, published in 1693 in the Philosophical Transactions. Clayton was first and foremost a botanist, but he devotes nearly ten printed pages to the birds of Virginia, among them

the Bald Eagle … the Body and part of the Neck being of a dark brown, the upper part of the Neck and Head is covered with a white sort of Down, whereby it looks very bald, whence it is so named. 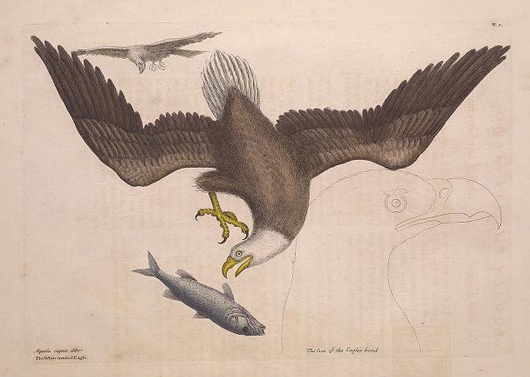 This bird is called the Bald Eagle, both in Virginia and Carolina, tho’ his head is as much feather’d as the other parts of his body.

Alexander Wilson understood the word in exactly the same way:

The epithet “bald,” applied to this species, whose head is thickly covered with feathers, is … improper and absurd … and seems to have been occasioned by the white appearance of the head, when contrasted with the dark color of the rest of the plumage.

Audubon, perhaps mindful of Wilson’s scorn for the name, avoids it entirely in the Ornithological Biography, giving the bird instead the more literal moniker “white-headed” and remarking

that the name by which this bird is universally known in America is that of Bald Eagle, an erroneous denomination, as its head is as densely feathered as that of any other species, although its whiteness may have suggested the idea of its being bare.

We could yield to the temptation of internet abundance and go on piling up examples, but the point is clear by now.

None of the earliest and none of the most important ornithologists in the first two centuries following the English settlement of North America understood “bald” in the eagle’s name to mean anything other than “naked,” “bare,” “hairless.” None so much as hints at a (non-existent) Old English or an (obsolete) Middle English word meaning “white-blazed,” which would be a poor description of the bird’s plumage in any case.

This is another instance of a “solution” being cobbled together well after the fact — to a problem that never existed.

The harder thing to think about is who is responsible for that convoluted and illogical tale and how it became the standard explanation for what is likely, at its root, a gentle joke (you can always tell it’s a joke if Wilson gets exercised about it).

Choate is surely largely to blame for the recent popularity of the story, but alas, he simply reports it as if it were true, without attribution. So here’s the challenge: Find the earliest attestation of the story, and help me trace this bit of inane but influential folklore to its source.