It’s the secret etymological handshake of the North American birding community: Do you know where the Prothonotary Warbler gets its name?

Knowing smiles all around; of course we do! The name alludes to the golden vestments worn by lawyers in the Roman Catholic Church, right? That’s what I’ve heard and read for all my birding life, and even Wikipedia agrees, so it must be true.

In birding as in all else, common knowledge is usually common — but only sometimes knowledge. Often enough, the stories we tell each other are contrived well after the fact, explanations cleverly thunk up to rationalize a set of circumstances we just don’t understand. And precisely that seems to be the case with this warbler story, a neat and often repeated solution to the problem of a name whose real origins we’ll likely never know.

Suspicion rises immediately when we see that even the most authoritative of modern accounts of this name differ significantly. Gotch, as good a first stop as any, tells us that Protonotaria

refers to the Chief Secretary of the Chancery at Rome, who wears yellow robes.

The almost unfailingly reliable Jobling moves things to the Eastern Empire, deriving the genus name from the

The popular literature may not be as trustworthy, but it does tend to codify received birderly wisdom. Diana Wells, in her 100 Birds, informs us that the bird’s

common name comes from its yellow plumage, the color of robes worn by papal clerks, or prothonotaries, when they met to confirm beatifications, canonizations, or other weighty matters.

None of the three authors quoted offers any citation to an original source, so we have to do the work ourselves. 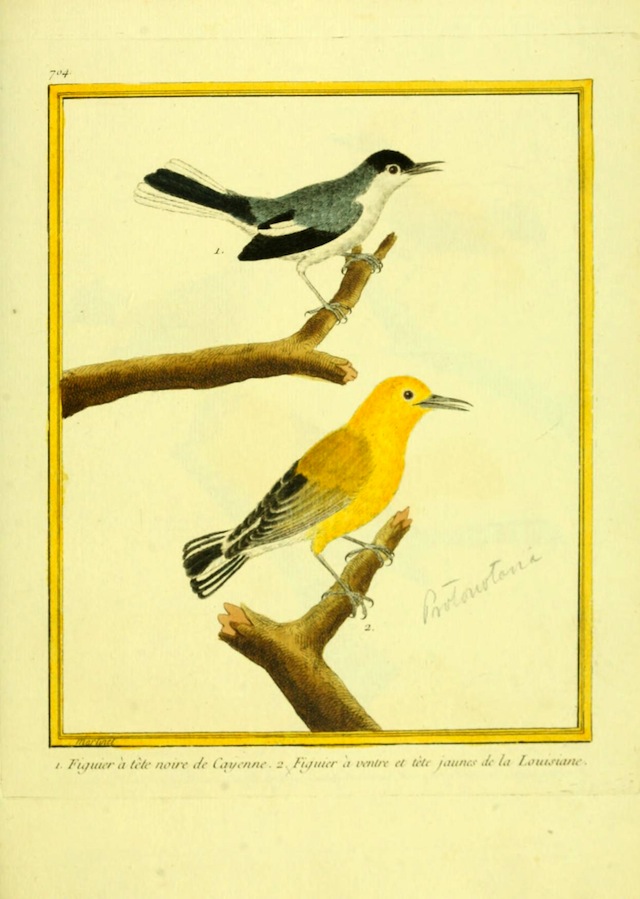 The name Protonotaria entered Linnaean taxonomy by way of Gmelin, who in his edition of the Systema naturae called the bird Motacilla Protonotarius, following the vernacular names given in Buffon, Latham, and Pennant. Says the last, in 1785: the Prothonotary Warbler

inhabits Louisiana. Called there le Protonotaire; but the reason has not reached us.

“The reason has not reached us.” Science was just as innocent twenty years later, when in 1807 Vieillot wrote that the name

“prothonotary” that one has retained for this bird is that imposed on it by the inhabitants of Louisiana; but no author has provided any etymology for this unusual designation.

Neither Wilson nor Audubon could offer any speculation about the origin of the name, and Bonaparte too seems to have passed over it in silence. Not even Cabanis, whose footnotes reveal such a fondness for etymologies, ventures a guess. Likewise, Baird, in elevating the name Protonotaria to generic rank, says nothing of its origins.

The reason for all this silence is simple: even the most learned, even the best-informed ornithologists of the eighteenth and nineteenth centuries did not know why the French-speaking inhabitants of the lower Mississippi had christened their “golden bird of the wooded swamps” Prothonotary. Elliott Coues, the greatest ornithological lexicographer who ever lived, could do no more than quote Pennant in the second edition of his Check List; twenty years later, the etymology offered in the final, definitive edition of the Key ends with a simple question: “Why?”

Neither is there any attempt at an explanation in Coues’s entry for the species in the Century Dictionary; it simply follows on the definitions of “prothonotary,” without etymological comment.

I hope that my point is obvious: if those who received and described the first specimens, and those who knew the bird in life in the earliest years of American ornithology, and those whose mastery of ornithological bibliography, lexicography, and etymology was unrivaled — if none of those men could draw a connection between the cavity-nesting warbler of “wonderful orange cadmium hue” and the berobed functionaries of some exotic court, then the connection must be a recent discovery or, more likely, a recent fiction. Who’s responsible?

As far as I’ve been able to determine without devoting entire days to the search, the earliest printed attestation of the story is in Bagg and Eliot’s 1937 Birds of the Connecticut Valley, later quoted in Bent:

We understand that Protonotarius is the title of papal officials whose robes are bright yellow….

This “we understand” is a bit hard to parse: are Bagg and Eliot adding something original to the discussion, or are they conceding the likelihood of what others have told them? In any event, those authors — writing more than a century and a half after Pennant first recorded the name — provide no authority for the “fact” that the papal lawyers wore yellow, a notion that I cannot find confirmed, either, in the standard ecclesiastic reference; another site (reliability unknown) suggests that at least today the vestments of the prothonotary are … purple.

Perhaps it is best at this point to go back to Pennant’s source, the Francophone inhabitants of eighteenth-century Louisiana. It doesn’t seem very probable that the Cajun residents of swamp and bayou would have known much about the sartorial traditions of the Vatican, and indeed, the Catholic Encyclopedia tells us that the office of Prothonotary “had almost entirely disappeared” by the late eighteenth century (it was revived in 1838). Could the Louisianans have known the word in a different context?

It would please me no end to think that there is a legal historian reading this right now. In French-speaking America — in Canada and Louisiana — the notarial system was well developed and important in the eighteenth and nineteenth centuries.

An institution that would be called on to play a critical role in the economic and political life of the future state, the notariat was transferred to Louisiana from France at the beginning of the eighteenth century. Indeed, it was with the royal decree of 1717 establishing the first civil government in Louisiana that the powers and functions of the French notary were transplanted in the new colony. From that point on, all parties involved in a real estate transaction were obliged to record the contract in the presence of a notary.

In Quebec, and presumably in Louisiana, too, notaries, who became “an essential component in Louisiana’s civil legal system,” were required to deposit copies of all notarized documents and transactions in a central depot — overseen by a protonotary. The protonotaire would thus have been a significant and well-known figure in the Francophone community.

I suspect that this was the home-grown Prothonotary who gave the name of his office to a bird, not golden-clad monsignors, Roman clerks, Byzantine officials, or “the chief clerk of the English court system.”

It’s harder to say what the bird and the legal official had in common, but Robert Ridgway, in the 1905 re-issue of Baird’s History, adds an interesting note: he says that the species is not at all “noisy and vociferous, as its name would seem to imply.”

Like rural busybodies the world over, Louisiana’s protonotaires were no doubt self-important buttonholers, given to saying the same thing over and over just to hear themselves talk. And there is no bird anywhere whose song is more monotonous than the tweet-tweet-tweet-tweet of a Prothonotary Warbler, holding endlessly forth from the depths of the hot swamp like the small-town functionary from his store-front office — the man who, I suspect, gave his name to the bird.